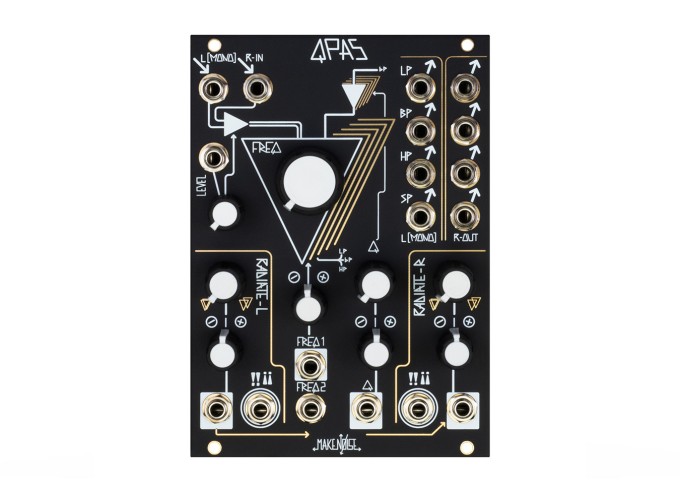 What's an all-analog quad core processor? Excellent question—the Make Noise QPAS Quad Peak Animation System is a stereo filter that surpasses the realm of simple filtering into another dimension of pings, resonant sweeps, and otherworldly modulation. A worthy successor to the long-missed MMG, the QPAS is a Eurorack filter unlike any other.

Filling an obvious gap in their already very complete lineup of modules, the QPAS sounds excellent as a simple filter: just plug in a saw or square wave, tweak the Freq and Q knobs, and bathe in the spectacularly squelchy glory. Much of the QPAS's magic, though, comes from three very special features: stereo operation, multimode output, and the Radiate parameter.

First things first: the QPAS offers true stereo operation, and a host of niceties for mono-to-stereo and stereo-to-mono normalization—that is to say, one doesn't need exclusively stereo sources to make full use of the module's stereo capabilities. This brings us to the matter of the outputs—all eight of them (whoa). QPAS offers lowpass, bandpass, highpass, and Smile-Pass outputs for its left and right channels, enabling some truly complex sonic combinations and bizarre stereo trickery when utilizing different filter types at different positions in the stereo field. Oh geez though, what is Smile Pass? Smile Pass is an ever-so-special filter type that creates some really lovely notching effects in the output spectrum: it sounds not unlike a phaser when modulated, and unlike the other filter types keeps the overall amplitude of the output relatively constant. And it is aptly named—it definitely puts a smile on our faces, anyway.

And that brings us to Radiate, perhaps one of the most interesting parameters on the entire module. As its name implies, the QPAS is a Quad Peak filter (not unlike the handful of Twin Peak filters out in the world)—essentially like four resonant filters with the potential for dramatic peaks and rings at each peak's cutoff frequency. Radiate is an extension of the Frequency control for these four peaks: the Frequency parameter defines a center frequency for all peaks, but the left and right Radiate controls each provide a control for the spread of two of the individual peaks from this center frequency. One can think of Freq like a master cutoff and the Radiate controls as a sort of "detune" amount for the individual peaks.

Since the Radiate can be modulated independently for the left and right output channels, the Radiate CV inputs are one of the go-to destinations for insane stereo trickery, enabling the creation of spectrally twisted, folding, cascading stereo spaces simply not possible with the typical filter or phaser.

At this juncture, it makes sense to address the response of the resonance control. When adjusting the Q on some filters, they go from dry to snarl to outright screeching in no time. The QPAS is absolutely not one of these filters. Akin to the Serge VCFQ or Hordijk Twin Peak, the QPAS's resonance response is tuned in such a way that simple impulses to its input can really make each individual peak ring, creating everything from clean decaying sines to the sound of striking a clay pot. In fact, one could conceivably use the QPAS as a type of primitive modal resonator, sending quick bursts of noises or impulses to the audio inputs to "ping" the filters themselves. One could go further and FM the frequency to create four decaying frequency modulated sines—or even further, and independently modulate the Radiate controls to create various FM depths for each pair of peaks. Wow, that's not a half-bad idea.

Oh and guess what? This filter has an input VCA with a dedicated CV input: so those trains of impulses one uses to excite this faux resonator can be amplitude modulated, creating pings with strong dynamic contrast. Or, of course, send in more traditional audio signals and see what magic can come from a pre-filter VCA.

And then, then !!!! controls—these are mysterious and essentially unexplained inputs that work with any signal type to produce everything from acid accents to bizarre FM-like sidebands...we don't know what it does, but we know it sounds great.

Despite having a basic rundown of its functions, there is some unexplained magic at work in the QPAS—on its surface it offers access to a world of familiar sounds (sweeps, fizz, and thump), but somewhere beneath lies a realm of mysterious, fantastical, and at times uncanny, disturbing sounds: gurgles, sputters, growls, vowels, binaural madness, and impossible spaces. It is not just a filter, and not just a resonator: it is a Quad Peak Animation System.