If you’ve been following our Signal articles or our social media feed recently, you are likely aware of The Mojave Desert Modular Experiment: a project in which we worked with some of our favorite local artists to build modular systems suited to their own workflows, despite the fact that none of them had used modular synthesizers before. We wanted to give these already amazing musicians the opportunity to see how a Eurorack system could fit into their music, and to see how their respective voices would manifest through a new set of tools.

Aware of Eurorack's innate potential to not only integrate into most workflows but also to expand them, we helped four acts to build custom systems, and let them work with them for a couple of weeks in order to prepare a performance. Together with the artists, we headed to the magnificent Mojave desert to film the results.

Remember—if you're in the LA area, all of the systems involved in the experiment are set up in our showroom ready for use! Come by our shop during the month of July to experience these instruments for yourself.

Dustin & Takako are a charismatic electro-acoustic duo that thrives on improvisation. The artists masterfully balance heart-warming sensibility and bold experimentation in their music. Takako Minekawa started her career as a J-Pop performer and eventually moved on to explore the diverse terrain of experimental music. Dustin Wong’s spirited guitar style emerged from years of playing in punk and noise bands. While each artist is an accomplished composer-musician in their own right, the fusion of Dustin & Takako truly bursts with unparalleled energy and quirkiness. They often perform with guitar, effect pedals, found objects, and classic 1980s-style digital keyboards to create looped soundscapes that sound at once nostalgic and alien, familiar but peculiar.

Dustin & Takako brought a number of their typical tools to the table: guitar, loop pedals, delay pedals, and desktop mixers fused their systems together and brought much of their own workflow and personality into the mix. This is a great testament to how open-ended modular synths can be: they are not closed systems...they are entirely open-ended, play well with other gear, and can occupy almost any place in a musician's workflow.

A curious onlooker inside Takako's mixer.
× 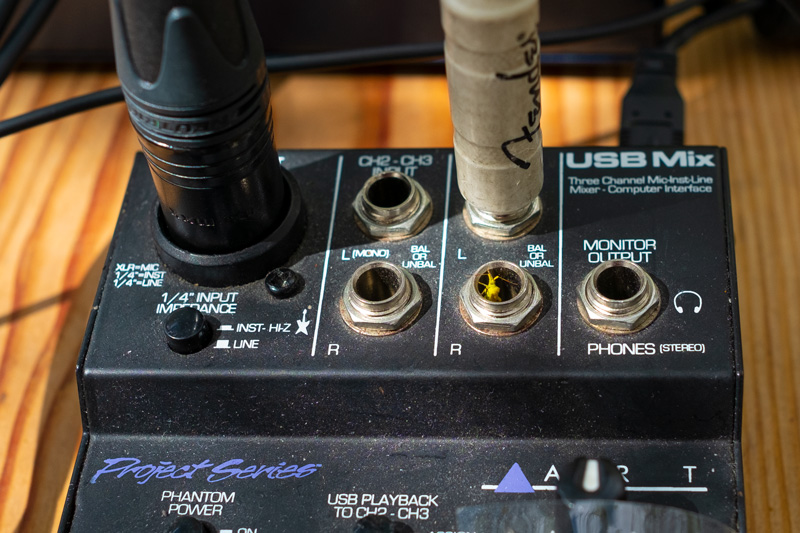 Filming Dustin & Takako’s performance reminded us of how amazing collaborations can be. Yes, modular synthesizers are complex machines that can do everything at once, but there is something undeniably mesmerizing about people playing music together. Although this element of performance often seems underexplored in the context of Eurorack, to us the format seems excellently fit for these sort of endeavors. After all, a single patch cable running from one system to the other (or even just a finely-tuned set of ears) is enough to start a conversation between musicians.

We put together two small systems with Dustin and Takako. Although their instruments were sonically distinct, they were built around a central theme of manual playability, important to the duo's improvisational approach.

Each system included the Buchla and Serge-inspired Make Noise Pressure Points: a keyboard-like module that converts touch into an expressive means of synthesizer control. The module includes four touch-sensitive plates and three rows of knobs that define and shape several control voltages, which can be used for any number of applications: they can control pitch, effect parameters, tone color—anything imaginable. Which plate is touched, the amount of skin applied to the plate and settings of the knobs work together to produce intimate gestural control, perfect for Dustin & Takako's nuanced performance style.

Both instruments also featured the Mutable Instruments Ears: a module that offers a way to bring external sounds into the Eurorack ecosystem. Ears includes a preamp capable of amplifying instrument signals up to levels suitable for use with Eurorack effects. It also has a built-in contact microphone, which can be scraped or struck in order to act as its own sound source. 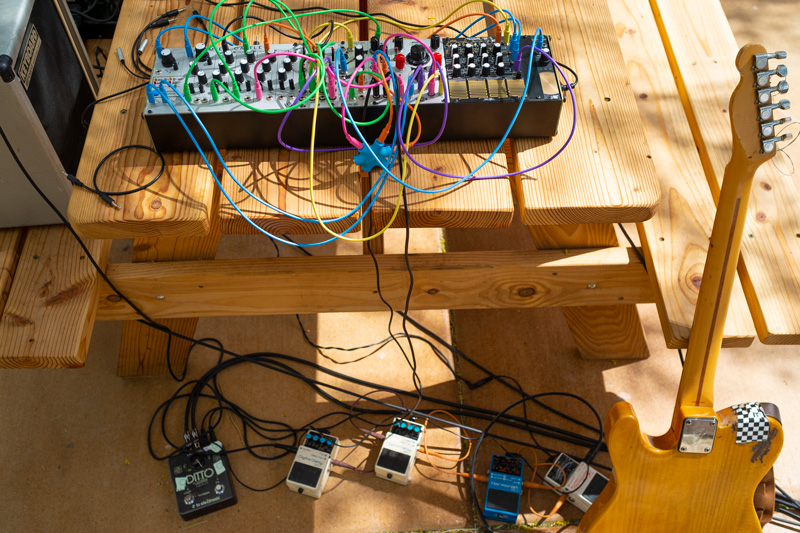 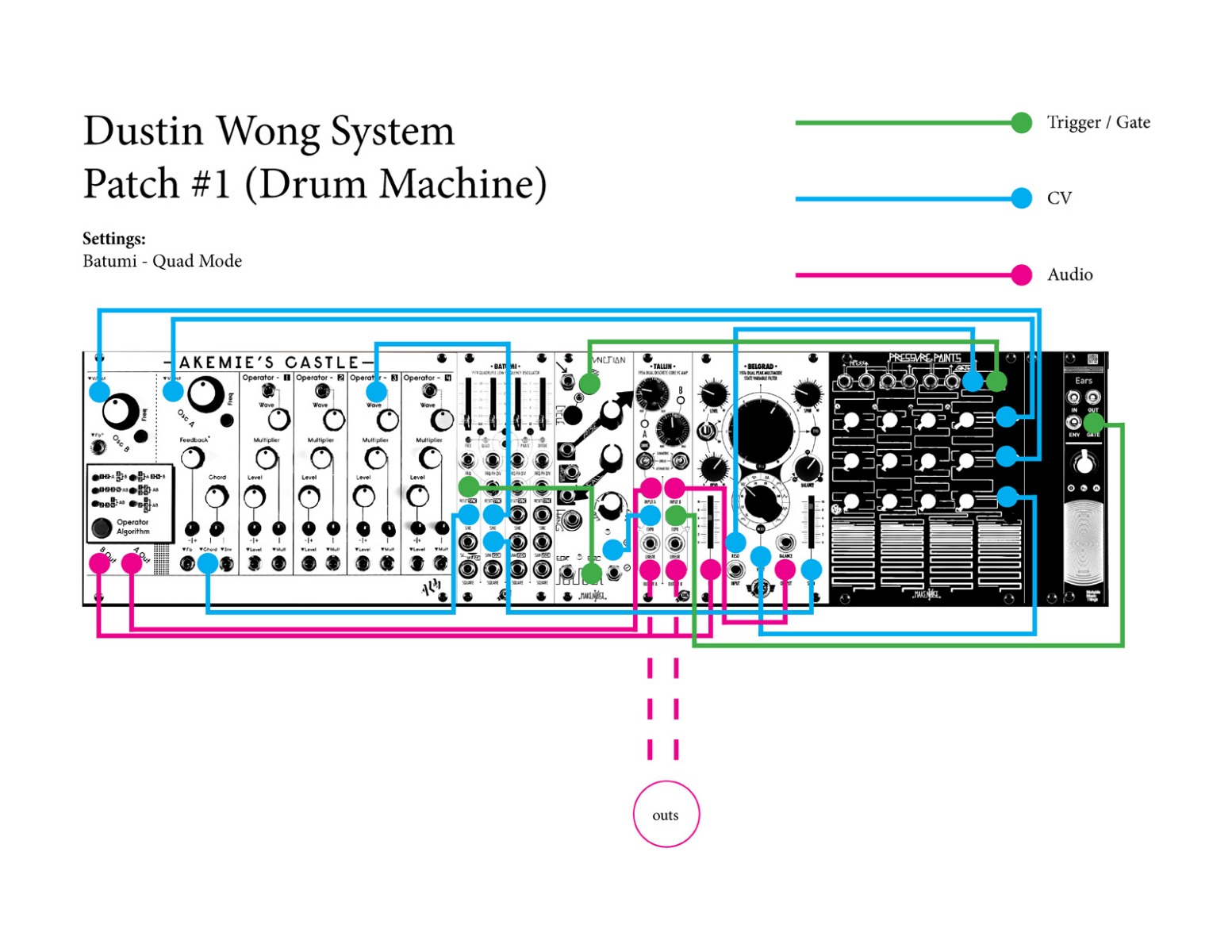 For the main sound source, Dustin chose the Akemie’s Castle from ALM Busy Circuits. A powerful FM synth voice, it is perfectly suited to his typical style, providing a huge range of 1980s-esque keyboard sounds that can easily morph into rich, alien textures. It can be clangorous, melodic, or wholly alien. XAOC Devices’ Tallin acted as a VCA, shaping the Castle's dynamic contour and providing an organic overdrive for extra coloration. When coupled with the snappy Make Noise Function envelope module, Tallin allows for flexible articulation—enabling everything from long swells to quick stabs and more. 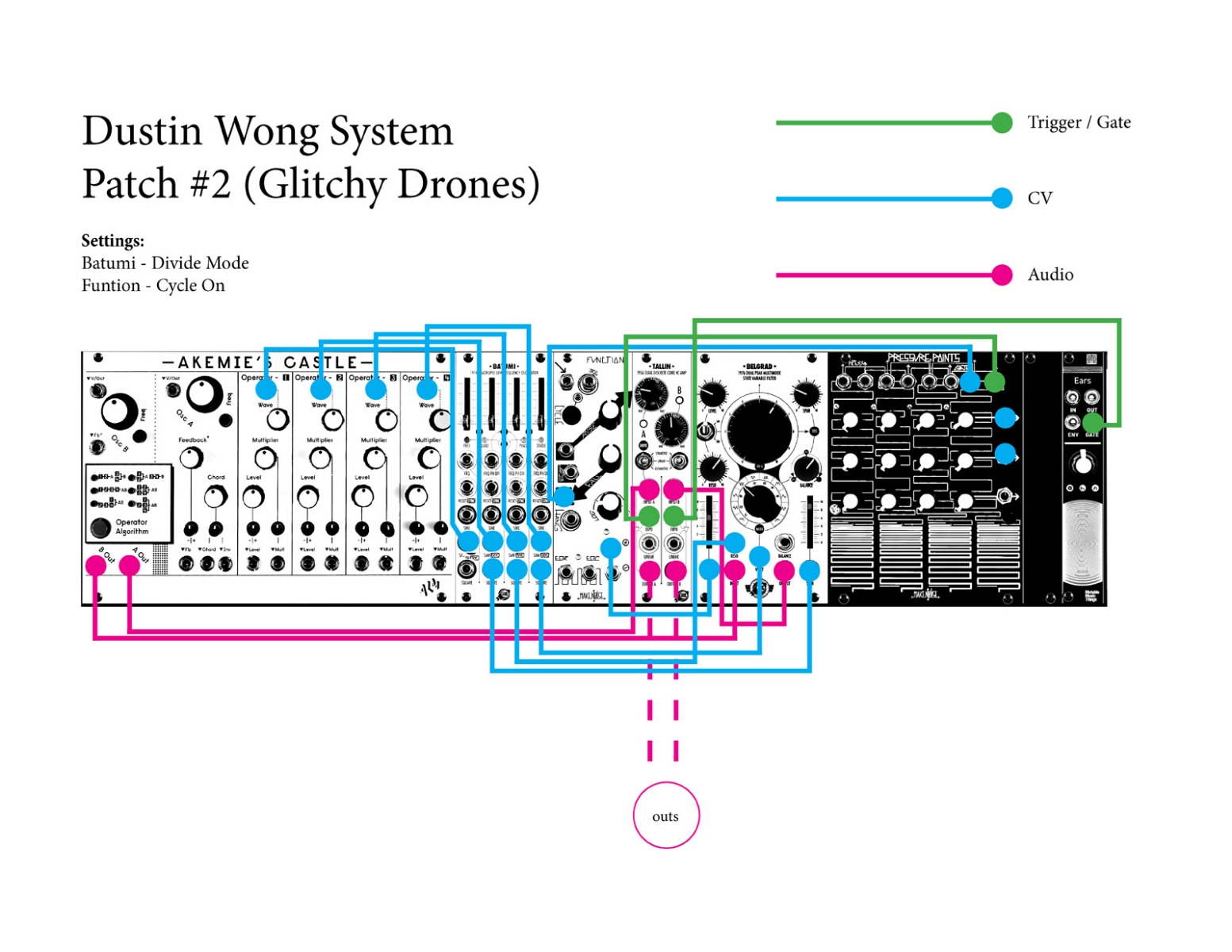 Dustin also selected one of the most unique filters in Eurorack—Belgrad from XAOC Devices. Belgrad can easily accomplish what one might expect from a filter, but its dual-peak architecture (meaning there are two filters interplaying with each other) can be used to achieve out of this world voice-like effects. Belgrad can do traditional filter sweeps and wah-like effects, but excels at highlighting parts of a sound's spectrum in ways difficult to achieve with more basic filters.

For the main modulation source, Dustin chose Batumi from the already familiar XAOC Devices. Batumi is a quad LFO that can simultaneously provide twelve modulation outputs, ranging from basic modulation shapes (like sine and sawtooth waves) to unpredictable results and sequence-like effects. 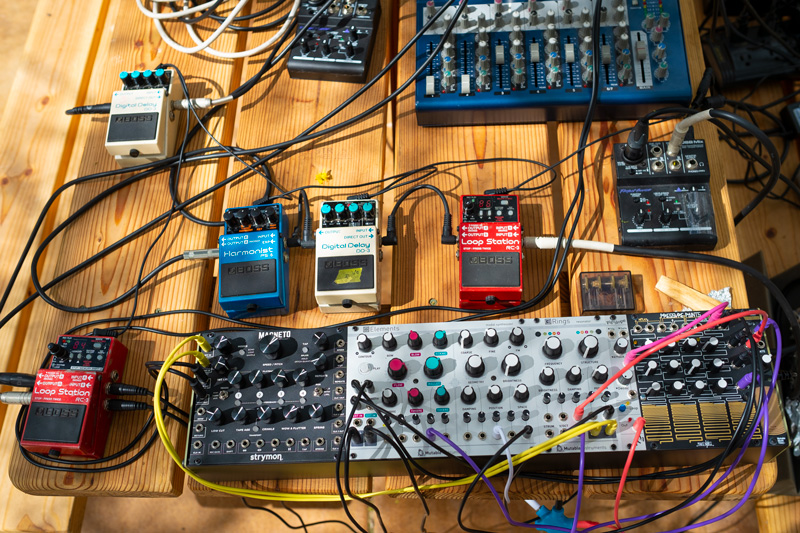 Sound sources in Takako’s system were selected for their profoundly textural, natural tones. The Mutable Instruments Elements and Rings fit excellently into this category, acting as perfect complements to one another. Both are based on digital modeling of acoustic resonators, allowing the creation of bell, string, drum, and wind-like tones and everything in between. Perhaps best of all, each can act as its own self-sufficient synth voice: you don't necessarily need many other modules to get the most out of these devices. Having seen Takako perform several times by striking and rubbing wine glasses, these modules felt like an obvious choice. 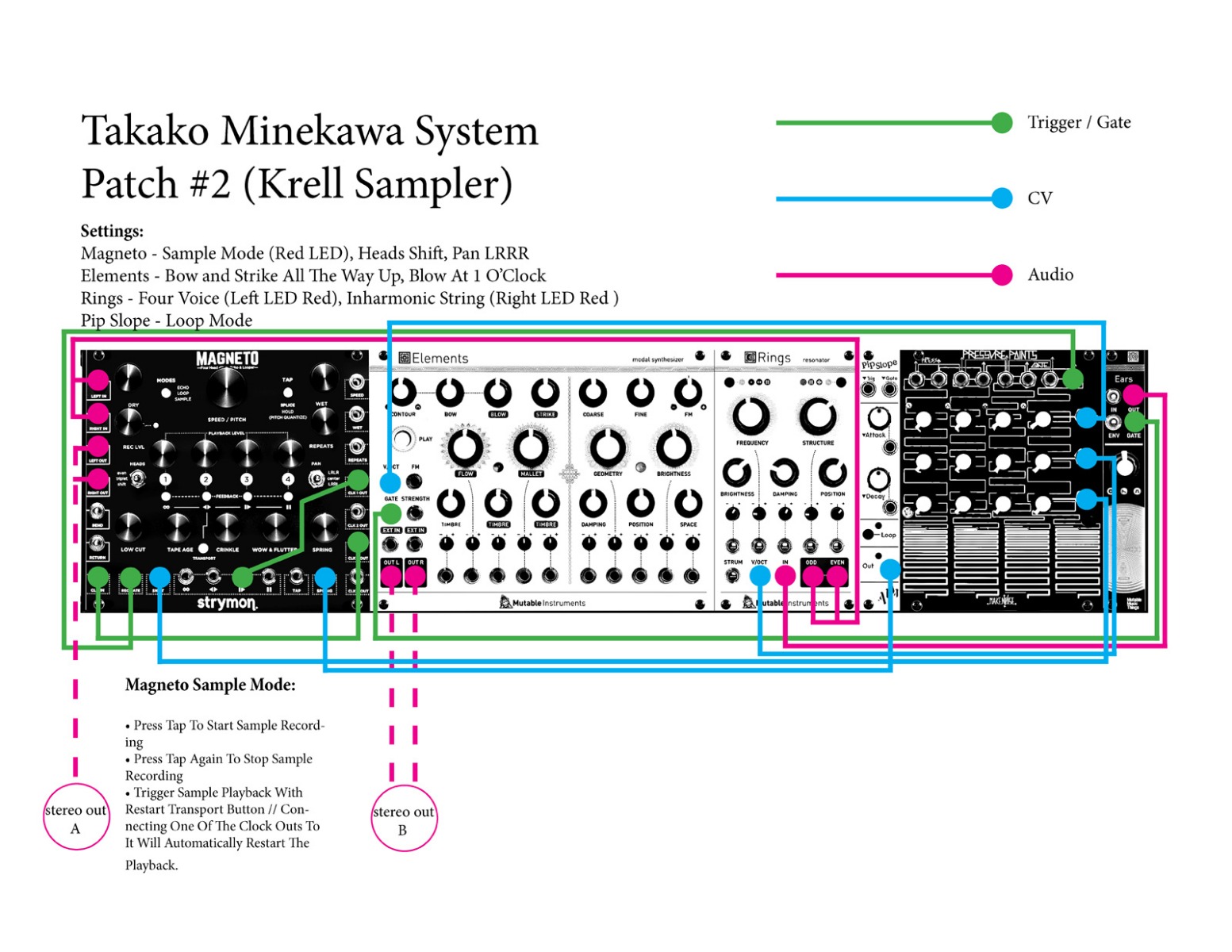 Takako’s live routine often involves construction of complex, layered loops via live sampling. As such, she chose to use Strymon's Magneto, a tape delay/spring reverb module with great internal looping facilities. The module can imitate various tape effects, from delay and pitch shifting to self-sustaining feedback tones. Lastly, we added ALM Busy Circuits’s Pip Slope envelope for sonic animation. It could be triggered by any of the Magneto clock outputs, manually activated via the Pressure Points, or independently set to a self-cycling mode for basic LFO behavior.

Because Rings and Elements are so well-thought-out, it is fairly simple to build a full system around them: in Takako's case, these two modules were able to act as independent voices that created everything from the sounds of bowed strings to struck glass...with a digital sound quality that places them comfortable in the same world as Akemie's Castle, and in the type of sound world that Dustin & Takako typically orbit.

Always mesmerising regardless their setup (in fact, we've never seen them use the same setup twice), Dustin & Takako naturally brought their own style and language to the systems they created. Creating music that is at once playful, alien, heartwarming, and nostalgic, they prove that great musicians will always make their voices clear, regardless of the gear that they use. With only two weeks to learn these instruments, they still created a beautiful, entrancing soundscape that sounds distinctly like themselves.

Again, feel free to visit our Burbank showroom to try these instruments for yourself, and keep tuned each Monday this month for the next result of the Mojave Desert Modular Experiment.