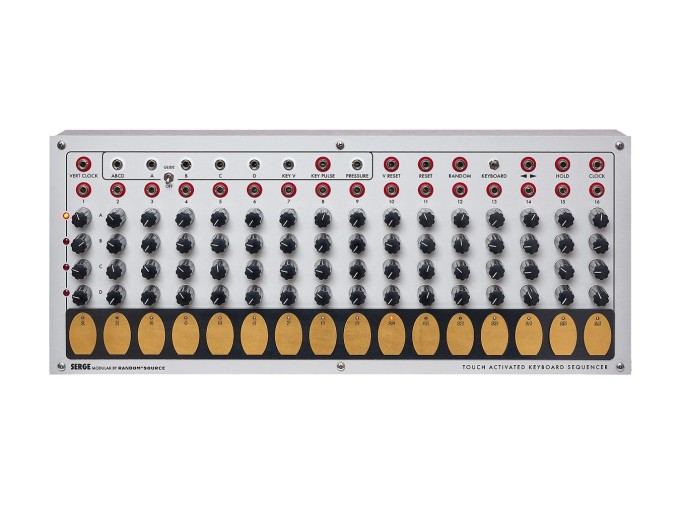 Note: This listing is for a 4U TKB in its own powered enclosure. This is not a Eurorack format module, though its inputs/outputs are Eurorack compatible. Requires Meanwell GSM60A24-P1J or GSM90A-24-P1M DC adapter (not included)

TKB, aka Touch Activated Keyboard Sequencer, by Random Source is a redesign of the iconic controller/voltage programmer originally designed by Serge Tcherepnin. This version provides 3.5mm jacks for easy interfacing with Eurorack and other modular synth formats. Additionally, it comes in its own boat complete with an internal PSU—so it's ready to use right out of the box, even if you don't have a 4U case to use with it.

TKB consists of sixteen-stage touch-capacitive keyboard, four dials per stage for setting voltages, and a wealth of inputs and outputs aimed for ultimate programmability.

Each of the sixteen stages features four outputs labeled A, B, C, D that produce voltages set by a knob on a corresponding row whenever the stage is activated manually or via external clock. Unique to the TKB design is the Vert Clock input, which advances the clock vertically through preset voltages of A, B, C, and D rows and delivering the resulting sequence at the ABCD output, which is useful for generating four-note arpeggios (or, with clever programming, sequences up to 64 stages long!).

This version of the TKB offers a special mode in which slew rates for channel A can be set via the channel B knobs, allowing 303-style glide-laden sequences previously impossible to achieve with the TKB alone. Touch response has also been improved in this version, providing a consistent and expressive playing experience.

The horizontal direction of the sequence can be manipulated via gate signals sent into Up/Down and/or Rand inputs. Each stage has a dedicated gate output that can be sent to external destinations, or can be used to set the length of the sequence when sent into the Reset input. The controller has a dedicated pressure output which produces +5V whenever a key is pressed and drops to 0V as soon as the key is released.

What is more, TKB can be clocked at audio rate which effectively turns it into an oscillator. In such configuration each of the sixteen stages becomes a voltage segment that collectively define the oscillator’s waveshape.