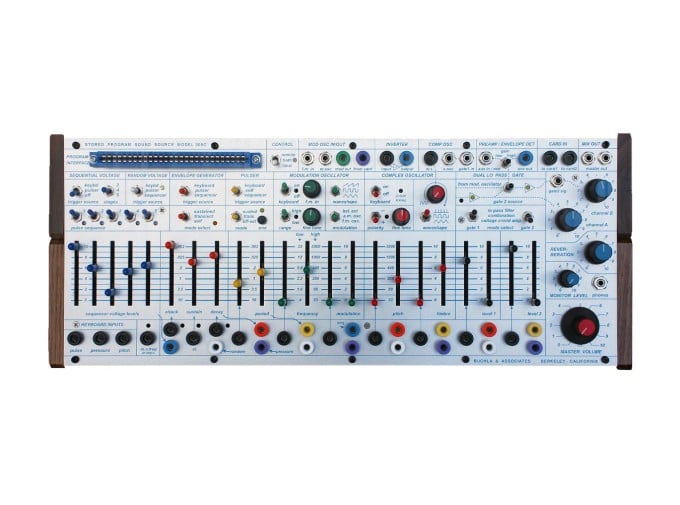 The Buchla Easel Command Module is a complete, standalone Buchla workflow based on the iconic Music Easel: a synthesizer designed for experimental synthesis and exploratory sound design. Originally part of the Buchla 200 Series, the 208 Store Program Sound Source formed the basis of the original Music Easel, and is responsible for the hallmark sounds of artists like Kaitlyn Aurelia Smith, Charles Cohen, Todd Barton, and others. Now, the Easel Command combines the newly-revised 208C with a desktop enclosure and provides users plenty of options for interfacing, from MIDI and USB connectivity to Eurorack-compatible CV and Gate inputs.

This instrument encapsulates many of the tools and the spirit of what is now often called "West Coast" synthesis. So while you can definitely think of it as being an experimental subtractive monosynth, its power lies in its potential for deviating from many now-standard synthesis concepts. Its slider-based user interface and color-coded banana jacks make it look unlike any other instrument out there—which, frankly, it is.

The Easel Command's semi-modular audio path contains two oscillators, two lowpass gates, a signal mixer, and a real, analog spring reverb. Of course, the heart of the instrument is the Complex Oscillator—a sound source which has come to define entire styles of music. This oscillator features continuously variable waveshape (from sine to spike wave, sine to square, or sine to triangle), as well as a wavefolder for the sine shape, simply labeled "timbre," which is perfect for creating growling, complex, harmonically rich tones. And while the Modulation Oscillator can function as a perfectly respectable second sound source, it also features the built-in potential to modulate one of three internal signal destinations: the Complex Oscillator's pitch (for FM), amplitude (for AM), or alternatively, it can be used to ring modulate external signals. With continuously variable modulation amount, a wide modulation frequency range, and switchable saw/square/triangle operation, this makes for a remarkably flexible set of sonic opportunities. Combined with each oscillator's dedicated signal outputs and FM input for the modulation oscillator, these modules are the core of the 208.

From the oscillator section, sound travels into the Dual Lo Pass Gate, an original Buchla circuit that combines the behavior of a typical filter and VCA. Using vactrols in the signal path, LPGs have a famously plucky, bouncy dynamic response—providing the "organic" dynamic behavior often associated with Buchla synthesizers. Each gate has normalled connections to its input, but these connections can be defeated by using external signal inputs. From the LPG section, the sound travel to the final mixer section, including spring reverb and separate level controls for the headphone and main signal outputs.

Of course, the audio signal path is only part of what makes this instrument special. Don Buchla's design philosophy more often than not settled on relatively simple sound sources/processors, instead placing emphasis on complex means of modulation—and this is where the Easel Command truly shines. With a five-step Sequential Voltage Source, quad random voltage source, looping AR/AHD envelope generator, and unique Pulser circuit (in addition to the Modulation Oscillator), the 208C contains a host of complex, non-traditional control sources that make it easy to craft intensely personal and interactive modulation schemes. This makes the Easel great for everything from animated leads and bass lines all the way to generative, self-playing patches. By using the included banana patch cables and shorting bars with the color-coded patch bay, you'll quickly start sculpting lively sounds with tons of internal motion—after all, this instrument has kept musicians creatively captivated for decades.

The Program Interface allows for the creation of presets 1973 style, using external expansion cards "programmed" by soldering resistors to mimic the behavior of the panel sliders, knobs, and switches. Simply follow along with Allen Strange's cult classic manual Programming and Meta-Programming in the Electro-Organism and learn how to solder resistors to save your patches. Or, stay tuned for updates from Buchla, who plan to implement digital patch storage with an optional expansion in the future.

Of course, the Music Easel has always been an instrument designed for interaction. And while the original version and 2013 BEMI re-release included a touch-plate keyboard, the Easel Command instead focuses on ways to integrate into a variety of modern musical workflows. The Easel Command offers MIDI input via 5-pin DIN and USB, with a thorough and flexible MIDI implementation that includes the ability to separately address oscillators, to add portamento, to trigger modulation sources separately from one another, and more. Additionally, users can purchase the optional EX-7 USB-A MIDI Host port expansion, which allows you to directly connect class-compliant USB MIDI controllers to your Easel. This makes it a breeze to connect your external controller (perhaps an Arturia Keystep, Keystep 37, or Sensel Morph with Buchla Thunder Overlay), turning the Easel Command into an even more self-sufficient instrument. And not least of all, the Easel Command features 3.5mm 1V/Oct and Gate inputs on its back panel, allowing direct connection from Eurorack controllers and sequencers or standalone CV controllers such as Make Noise's 0-CTRL.

Buchla USA's new take on the Music Easel couldn't be a more remarkable instrument. It provides a great way to add new sounds to your studio, or to start exploring modular synthesis for the first time. Bringing a classic workflow to a lower price than ever before, the Easel Command is a complete instrument that offers a perfect way to explore modular synthesis outside the context of Eurorack, and to start learning about what makes a Buchla so distinct from everything else out there.

Also Sarah worked with Sensel to make an Ableton Live instrument (Sound Worlds) that uses samples from the Buchla Easel Command and is designed to work with MPE control from the Sensel Morph. Download it here: https://morph.sensel.com/pages/sbrbuchla

Going Bananas on the Buchla Easel Command 208C!
Wes shows off some Never-Before-Seen advanced Easel tips and tricks to supercharge your workflow!
The Buchla 208c Easel Command Synthesizer is a modern revival of the classic Buchla Music Easel. With built in MIDI and USB hosting functionality, as well as a slew of quality of life improvements, the Easel Command 208C is the definitive west coast style synthesizer.

These tips are hot!! so grab a cool drink and make sure you've got enough potassium in your diet before we dive in!

The Secret to Semi-Modular Setups with the Patch Pals
Patch Pals Jacob and Wes go over some different semi-modular setups and the concepts behind using different pieces of gear and even different formats in a "modular ecosystem."

Photay (Evan Shornstein) is fresh off a fruitful trip to LA which saw him playing multiple shows as part of a residency for Feels Like Floating (@feelslikefloating , as well as a record release of their newest work "An Offering" on @International Anthem
We were able to catch up with Evan and record an intimate improv set featuring the Buchla Music Easel, Roland SP-404MKII and TR-8s
Buchla Easel Command Semi-Modular Analog Synthesizer Reviews
Register with :