To anyone familiar with the experimental music scene of the last two decades Los Angeles-based outfit Xiu Xiu doesn't need introduction. With more than a dozen releases under their belt, Xiu Xiu have explored a wide palette of sonic interwebs. Consistently eclectic, the band balances between softness, vulnerability, and violent auditory assaults. Steering through numerous metamorphoses in the line up over the years, today the band consists of its unchanging driving force Jamie Stewart, and talented multi-instrumentalist Angela Seo. Comparatively broad in scope relative to the bands musical output is their preferred instrumentation—endlessly shifting from record to record, Xiu Xiu adopted everything from conventional rock-band instrumentation to an international collection of gongs, bells, and whistles to one of a kind hybrid instruments to drum machines, and all flavors of synthesizers.

Recently we welcomed Jamie and Angela to our studio for what they explicitly told us would be a demonstration of some of the most "horrendous" synthesizer sounds—and of course, we simply could not resist such a proposition. Employing select effects pedals, a desktop synth, Eurorack modules, and a berserk modified high-voltage test oscillator, the duo rattled the walls of our studio and the guts of everyone in it with high-quality squawks, squeals, skronks, and thunderous growls.

The Instruments of Horrendous Noise Making

Instead of presenting their amalgamation of equipment as a single electronic noise-making behemoth, Jamie and Angela separated their gear into several focused setups—all equally capable of unruly sonic wildness—while maintaining their own distinctive sonic characters. So let's explore them.

Setup A was a joint effort of Jamie twisting controls of the Trogotronic's one and only TR-Valkyrie Analog Hot Rod Synth, and Angela manipulating and sequentially switching a compact feedback-centered chain of pedals comprised of Death By Audio Total Sonic Annihilator, Boss GE-7 7-Band Graphic Equalizer, Earthquaker Devices Hummingbird, Aqueduct, Bit Commander, Grand Orbiter, and lastly DBA Rooms. The result of this rather minimalistic gear ensemble is nothing short of face-melting. 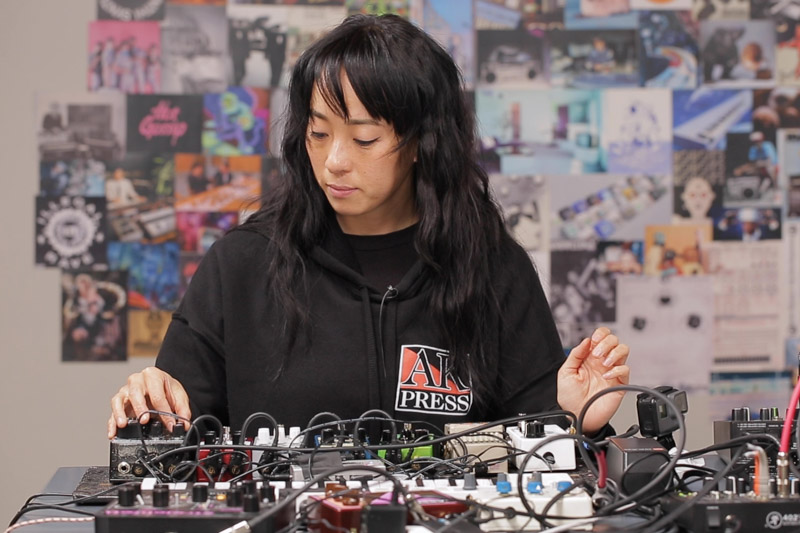 For Setup B Angela used an even smaller set of equipment, strategically concentrating on Waldorf's ingeniously named Streichfett string synthesizer set to a sustained drone by a Keystep, and further processed by the Malekko Heavy Industry B:ASSMASTER distortion, and Frantone Glacier ring-modulator. Under Angela's control this gear quartet sang in discordant goosebump-raising drones, that felt like a score to an unreleased (or yet to be released?) David Lynch film.

Moving over to Eurorack. The patches constructed by the duo for the Setups C, D, E and F are all about feedback explorations, or as Jamie put it "an experience prescribed to modules of having an open brain surgery while remaining in full consciousness, and furthermore watching the whole procedure on the screen in front of you". 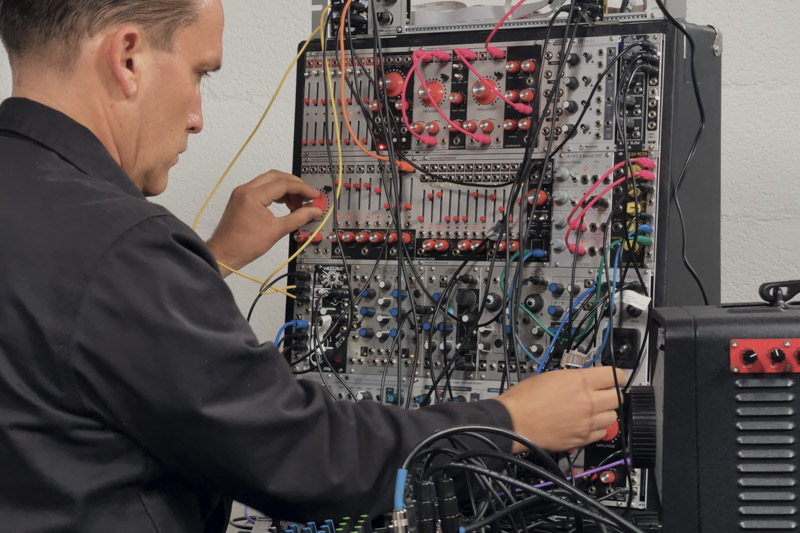 In Setup C the artist explored the gnarly effects caused by using the last harmonic output of Verbos Electronics Harmonic Oscillator as a carrier for Random Source Serge Ring Modulator, and Make Noise DPO Final waveform output as a modulator. As one would expect, the sound of such configuration is not one to keep babies asleep, and at higher volumes could possibly even pass as a sonic weapon.

Setup D involves a popular auditory illusion, known as Shepard Tone (in this case generated by Make Noise Telharmonic) subjected under heavy modulation by four asynchronously running LFOs, and further processed by the Verbos Electronics Bark Filter, with odd and even frequency bands split into the left and right speaker channels respectively. This creates a dizzying, potentially physically disorienting effect when listened to in stereo as the frequency balance between the speakers remains in permanent disequilibrium, an effect reminiscent of work of the composers exploring edges and extremes of sonic perception such as pioneers Maryanne Amacher and Dick Raaijmakers, as well as new generation artists like Thomas Ankersmit and Ben Vida.

Setup E is a pretty much an investigation of cross-modulation and capacity for feedback of Verbos Electronics Complex Oscillator. The triangle waveform output of the modulation oscillator is modulating the frequency of the carrier, and at the same time its sawtooth output is patched to modulate its own frequency. The triangle waveform output of the carrier in turn is routed to the order (wavefolder) input of the Harmonics section, and the master output is further amplified by the limited edition Zvex Jonny Overload fuzz pedal. By carefully adjusting the attenuators of the modulated parameters, an extremely wide palette of sounds can be generated—anything from cascading rhythmic pulsations to bass-heavy morphing drones to pure noise.

Lastly for Eurorack explorations, Setup F is centered around another complex oscillator, this time in an unapologetically digital flavor—Noise Engineering Loquelic Iteritas. The oscillator's output is split via a multiple, with one copy entering the mixer dry, and another one processed by the Rare Waves Grendel formant filter for an alternative vocal-like flavor. The oscillator and filter parameters are modulated in real time via a joystick module, which provides a very expressive way to quickly and efficiently change the sound with rather simple motions. The patch itself is pretty straightforward yet amazingly effective in delivering absolutely brutal sounds. This is what happens when you put Noise Engineering Loquelic Iteritas at the core of your setup—for noise/drone applications, you don't really need much else but a well-chosen controller to spawn some serious sonic havoc.

Setup G, the last one for today, is a great example of how a well-paired desktop sound generator, and effects processor can already be enough for producing a wide array of complex sounds. In this case it is a beautifully hazardous coupling of Benidub's Dub Siren and Death By Audio Echo Dream 2. Both units have capacity to produce heavily modulated sounds by themselves, and when you add them together...well, you get twice as much of that—a swirl of timbrally-complex restless sonic weirdness. While there are many fantastic all-in-one noise/drone synthesizers on the market these days, there is always something special about finding a perfect match among pieces of gear that were never specifically intended to work together, and that is one good example of such.

Perhaps the best word to describe the "horrendous" noises that Jamie and Angela brought to our studio—and now to you on the other end of the screen—is "inspiration". Everyone's artistic path is unique, and it often leads you down a road untraveled by others. Peeking at the discoveries of others and their moments of excitement is a gift that we get to have. It helps us to see our own work from a different perspective, and perhaps pushes us to take unexpected turns in our own artistic practices. We hope that peeking at Xiu Xiu's sound design process inspired you to take a different look at the equipment you have, or maybe to add something else to your toolset, and definitely to make more awesome music. And yet if you need more inspiration, Xiu Xiu just released a brand new album Oh No which is made up entirely of duets. The album features a wide variety of artists including Liars, Chelsea Wolfe, Liz Harris, and many more. Enjoy!

Some of the Instruments Used by Xiu Xiu