A New Generation of Groovebox

In this video, we explore some of the many possibilities of Roland's MC-101: one of the newest additions to the Roland standalone groovebox family. With a tiny footprint and the potential for battery power, it is an easily portable solution for building entire tracks of any style—and for performing them live.

Roland's recently-announced MC-101 and MC-707 seemed to come out of nowhere—after all, they had not produced a groovebox-series device since 2006's MC-808, instead focusing the last several years of their electronic instrument development on stage keyboards and keyboard synths, Boutique-series synthesizers, and AIRA series desktop synths and drum machines.

The first Roland groovebox, the MC-303, was met with some criticism: it was basically restricted to using preset sounds, which, in an age when musicians were vying for sampling options and the ability to synthesize their own sounds, did not go over well. Subsequent releases such as the MC-909 and MC-808 took a more open-ended approach, with a considerably more fleshed-out means of synthesis, sampling, and sequencing.

The MC-101 and MC-707 pick up where the later grooveboxes left off, providing a considerably more extensive and flexible set of options than their predecessors.

The MC-101 might not look like much—it's fairly small, battery-powered, and seems at first glance to only have four independent tracks. But there's more to this than meets the eye. 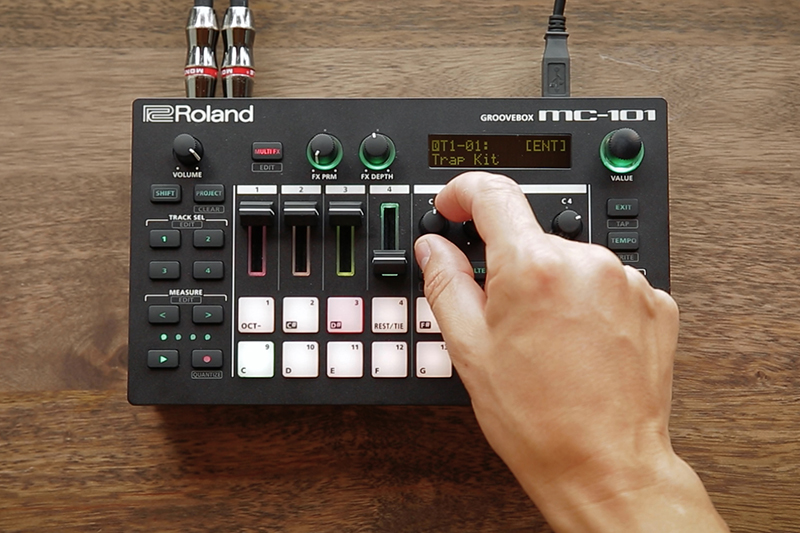 In a world with one-sound-per-track sequencers are commonplace, it's easy to feel like four tracks couldn't possibly be enough: we're often used to allocating an entire "track" to only a single drum sound or sample, for instance. However, "tracks" on the MC-101 are different: each track is itself a polyphonic sound engine, allowing complex arrangements within the level of the track itself. What's more, the four tracks do not have fixed functions: each track can act as a Drum Track, a Tone Track, or a Looper.

Drum tracks can be thought of as sample-based 16-instrument kits. Each drum track can use the variety of built-in sound sources (ranging from classic TR-808 and 909 samples and beyond), or can be built from user samples—meaning that any sound can be used as part of a drum track. With even a single track, the MC-101 is capable of many of the functions of a typical drum machine, making it uncommonly powerful in this regard alone.

Tone tracks are, in effect, synthesizer tracks. The polyphonic synth engine provides access to a fairly common subtractive synthesis workflow with PCM-based waveforms. There are up to four oscillators per voice, multimode filter, amplifier, dedicated pitch, filter, and amplitude envelopes, an LFO, and dedicated effects, allowing for an enormous breadth of sounds from thick monophonic basslines to glistening pads and biting leads.

Looper tracks on the MC-101 can be used to play back audio files, or can allow for continuous recording from a computer (via USB), from any of the individual tracks, or from the device's own mix output. This enables the potential for resampling-based techniques, great for sound manipulation during live performance.

And of course, the MC-101 is rife with other features: a huge number of built-in effects on both the track and global level, a scatter effect playable via the 16 pads, and, of course, a comprehensive MIDI sequencer with clip & scene capabilities. The larger MC-707 opens up the potential for sound design considerably by allowing users to dive more deeply into the sound engine, but the 101's portability and streamlined feature set is still enough to create complete tracks and live performances without needing to touch a computer. Any addition to the standalone workstation format is welcome, and the MC-101 brings with it an array of unique features for performance and sonic experimentation.