The Evolution of MIDI through MPE

In this video, we explore some of the new territory provided by MPE: a polyphonic expression protocol that provides instruments and controllers with extended expressive control. By pairing Keith McMillen's K-Board Pro 4 with Black Corporation's Kijimi, the power of MPE quickly becomes apparent: unlocking doors to completely new ways of interacting with electronic sound. 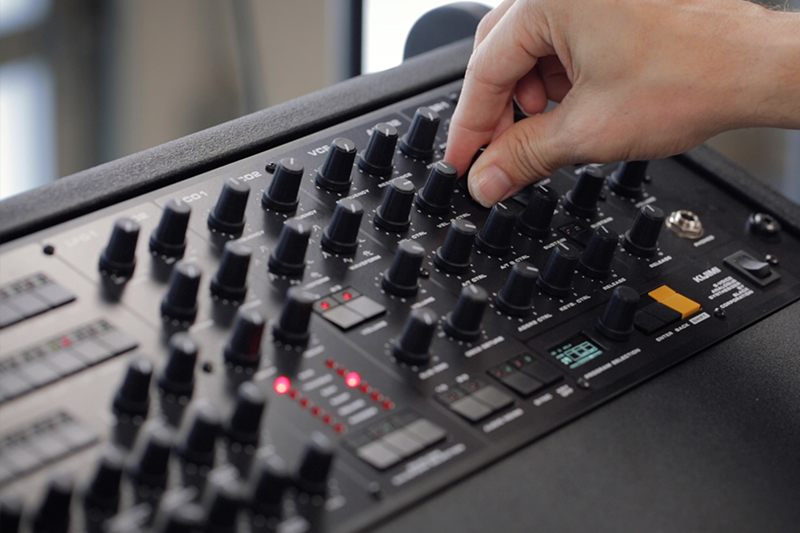 The last several years have been a blessing to the MIDI community: the emergence of MPE as a supported, multi-manufacturer standard has extended MIDI in such a way that it has begun to overcome some of its most obvious shortcomings. MPE, or MIDI Polyphonic Expression, is a standard by which a sound's pitch and timbre can be controlled polyphonically. This enables articulate, expressive playing styles impossible with prior generations of MIDI-capable controllers and synthesizers.

The initial push for MPE's development was borne out of controllers—inspired by devices like Haken's Continuum, new devices like Roger Linn's Linnstrument and ROLI's Seaboard emerged, each expanding the typical MIDI controller's pitch and velocity information with new dimensions of touch sensing.

Typically, MIDI pitch bend, key pressure, and CC messages (the types of messages typically used for timbre control) act globally. Because most synthesizers relegate individual timbres to their own independent MIDI channels regardless of polyphony, and each channel has only one pitch bend message, for instance, applying pitch bend usually equally affects all notes on a single channel...which is to say, if you play a chord with a single-channel polyphonic instrument and then apply pitch bend, all notes of the chord will bend. But by implementing a clever channel-per-note strategy in which each new keypress is realized on a separate MIDI channel, MPE allows independent timbre and pitch control for each voice—permitting per-note pitch bend and tone control. By providing a new way to provide hands-on control of standard MIDI parameters, MPE controllers have provided new expressive potential to countless musicians.

One of the most recent additions to the growing list of MPE controllers is Keith McMillen's K-Board Pro 4 (or KBP4 for short), an extension of their line of flexible MIDI devices. With a four-octave keyboard laden with KMI's Smart Fabric Sensors, KBP4 provides traditional note data along with several other per-note instructions: continuous pressure, horizontal touch position, vertical touch position, attack velocity, and release velocity. This means that every key is like an XYZ touch pad, allowing truly multidimensional sonic control. (Note: to use the K-Board Pro 4 with DIN MIDI devices like the Kijimi in the video above, one must use the KMI MIDI Expander as an intermediate device.)

Unlike many other MPE controllers which favor alternative note layouts, the KBP4 provides a familiar user interface: black and white keys with a spacing and profile that feel immediately accessible to keyboard players. This gives key players a way to break past many of the awkward early stages of learning a new instrument/interface, taking them straight toward the exciting process of rediscovering what all of their previously-cultivated techniques can mean when given new expressive context. It still takes time to develop technique—but using a familiar and comfortable layout saves tons of time and gets you directly to exploring new musical potential.

So far, though, the development of MPE-capable hardware has moved more slowly than the development of controllers: until the standardization of the MPE protocol, manufacturers were hesitant to create instruments built around it. Luckily, the past couple years have seen tremendous growth in this area—and arguably the most visible developer of MPE-capable synthesizers is Japan's Black Corporation, whose Deckard's Dream and Kijimi have changed the game in terms of high-end polysynths.

Both synthesizers are eight-voice analog synths, allowing easy access to MPE control of tons of parameters. Deckard's Dream came first: inspired by the Yamaha CS-80, it provides poly-aftertouch pads and soundscapes evocative of Blade Runner, the film which provided its namesake. While they share a similar form factor and overall architecture, though, Deckard's Dream and Kijimi often lead to starkly different results: DD provides access to endless classic analog polysynth tones, but Kijimi is a modulation-laden monster that provides everything from tame pads to absurd sound effects...sometimes even within the course of the same note.

Based on the extremely rare RSF Polykobol, Kijimi provides tons of modulation options and makes no attempt to prohibit extreme sounds: it is easy to drift from serene chords to chaotic maelstroms at a moment's notice. And, as with Deckard's Dream, the MPE implementation is extremely well-thought-out; by providing dedicated knobs for using velocity and aftertouch to modulate most key parameters in any combination, Kijimi makes it possible to construct highly expressive patches of all sorts: from dreamy to aggressive, serene to outright destructive.

While Kijimi utilizes a more or less straightforward subtractive architecture, it still manages to provide its own sonic character and clever options for timbral manipulation. One of the most interesting and singular aspects of its sound is the oscillators' waveform controls: rather than offering a selection or mixture of discrete wave shapes, it instead provides a knob for continuously morphing between traditional shapes, with plenty of opportunity for novel shapes in-between. Each oscillator's shape can be controlled independently, as well—this makes for a particularly satisfying MPE experience, where aftertouch can impact the timbre of each note in nuanced, yet profound ways.

Of course, there are no truly standard MPE playing techniques—and this is one of the things that makes Kijimi so gratifying to use. It is a playground for easy experimentation with new controllers like the KBP4...one which makes it easy to change the instrument's behavior with the push of a button or twist of a knob, discarding the ideas that don't work for you and quickly finding unexpected new avenues to explore expressive performance. 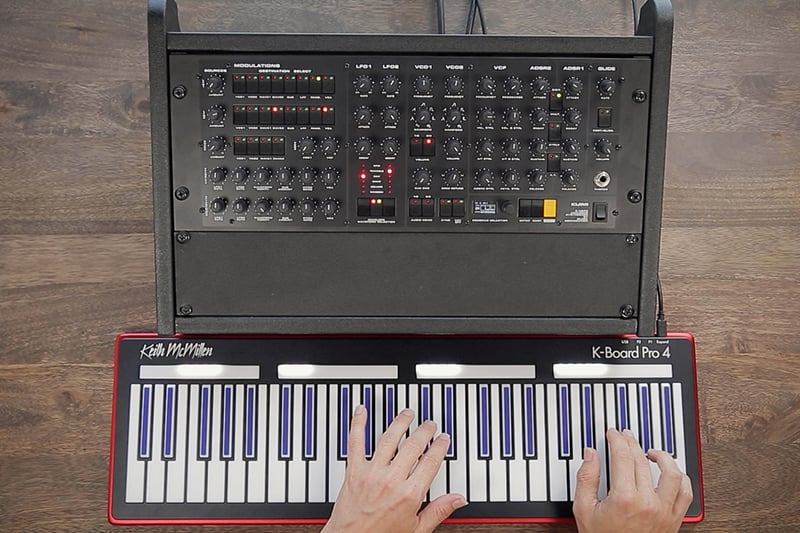 MPE provides new ways of playing electronic music: it clearly brings endless potential to the table, but requires practice and experimentation. The combination of the K-Board Pro 4 and Kijimi has proven to be an excellent way of exploring this new territory; the KBP4's familiar interface and the Kijimi's ease of MPE-related sound design make for a remarkably immediate playing experience. And while this combo still requires some amount of re-training one's playing habits, it is immediately clear just how much sonic opportunity they unlock.