After peculiar stop-motion teasers with colorful eyeballs and tentacles, the newest member of the Elektron lineup is here: Model:Cycles. With a similar footprint to the Model:Samples, Model:Cycles is a compact desktop groovebox—this time, built around a powerful but easy-to-use FM synthesis engine. And like the Model:Samples, this new machine will appeal to a wide range of musicians—from people new to music-making all the way to synthesizer aficionados looking to add a new tool to their kit.

Model:Cycles is a six-track groovebox with a sound based entirely on FM synthesis. And while FM is a notoriously complex synthesis technique, Model:Cycles cleverly turns it into something simultaneously intuitive and flexible. Instead of making FM "about" modulation routing algorithms, variable indices, and multi-stage envelopes, it simplifies the complex aspects of FM synthesis design and provides the users higher-level control of the sound. This takes the approachability of the Digitone even further—and while you may not have the same expansive possibilities offered by a Yamaha DX-7, it does make FM even more approachable and usable than ever before.

One of the key innovations in the Model:Cycles is the concept of the Machine. The sound engine features six distinct "Machines," each tailored toward producing a distinct type of sound. So instead of thinking of what modulation routing and envelope shapes you need to build a sound from a bank of interrelated sine waves, you can instead select a Machine tailored toward making specific types of sounds. The six available Machines are Kick, Perc, Snare, Metal, Chord, and Tone—and best of all, each of the six tracks can use any of the Machines—so if you need multiple chord tracks, for instance, it is definitely possible.

Each of the Machines has four Machine-specific controls for defining its overall character. And while the instrument doesn't provide you any immediate feedback about how each control works, its overall impact is always apparent. The multi-purpose controls are called Color, Shape, Sweep, and Contour, and they behave differently (but still somehow similarly) for each machine.

The Kick Machine specializes in kick drum sounds, ranging from long and ringing sine kicks to heavy, snappy, almost metallic sounds. The Snare Machine produces sounds with hard attacks, and a fine degree of control over pitch contour, overall noisiness, and the snappiness of the sound. The Metal Machine is similar to the snare, but produces sounds with much more extreme inharmonicity, much like the sound of an 808 cowbell but with a much more profound degree of control. You can continuously control the detuning of several oscillators with Metal's Color control, so you can get cleaner sonorities or absolutely clangorous tones. This combined with the Sweep and Contour allows for the creation of some really complex, interesting sounds. Perc is a somewhat more straightforward FM-sounding Machine, using multiple oscillators with variable FM amount to produce percussive tones like toms, claves, and more—using Sweep and Contour, you can change the sound's timbral profile from ringing to more dampened tones.

The Chord machine uses multiple oscillators to create chords and clusters of sound. The Shape control determines the chord quality (Major, minor, M7, etc.), while Color determines the chord inversion—continuously fading between tons of pre-set combinations of tones. The chord quality is determined only by these controls, and is transposed by the selected root note...but of course, with clever parameter locking, you can vary the chord quality and inversion step by step simply by sequencing through different Shape and Color values. Interestingly, Shape also allows for several variations on Unison, in which case Color acts as a detuning/unison spread control, great for creating animated swarms of sound. 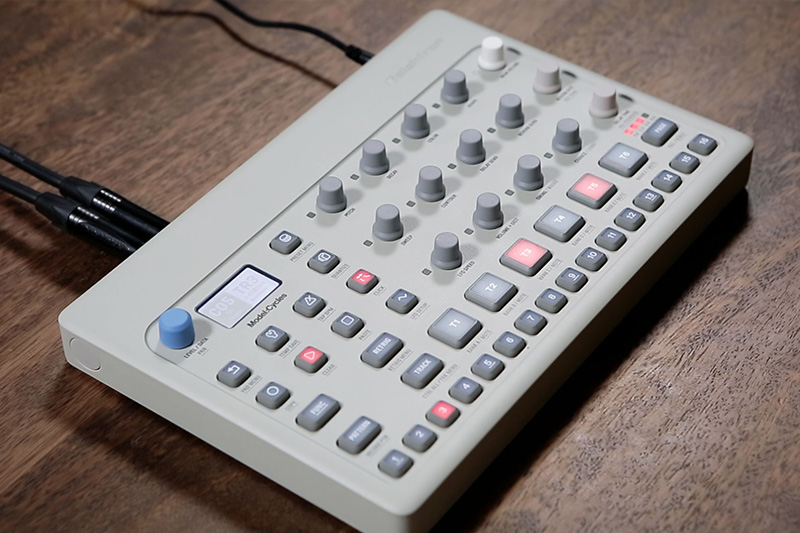 The Tone machine is the place to access all style of classic FM Synth tones, from electronic chimes and keys to snarling basses. Color controls the FM ratio while Shape controls the Index—so with this Machine, you get much more straightforward controls for typical FM parameters. Sweep introduces extra noise and grit to the tone, while Contour creates dampening effects by varying the intensity of the FM over time. Despite this seemingly simple combination of parameters, Tone has a shocking sonic breadth.

Of course, once you get used to each of the Machines, you begin to realize that they can all do much more than their names might immediately suggest. Metal can be great for creating chord tones; Chord can create huge, detuned trance leads; Snare can create edgy kicks; Kick can be used for melodies...and so on! And of course, since all of the sounds' key parameters can be parameter locked, there's no reason that a single Machine can't change duties mid-sequence. For instance, your Metal machine could go from cymbal sounds to clicky glitches and stacked harmonies on every step—and having this level of flexibility on one of six tracks means the potential for tremendously intricate arrangements is vast. Controlled by a classic Elektron sequencer rife with parameter locking, trig conditions, and easy programmability, you can start creating immensely detailed and personal music in no time. And with dedicated effects and performance controls built in, the Model:Cycles is an entire performance environment in under $300—and frankly, there is nothing else quite like it.

Despite the affordable price and small size, Model:Cycles is no toy; it is a deep machine that rewards exploration, and it will no doubt help to create tons of bizarre and fascinating music.