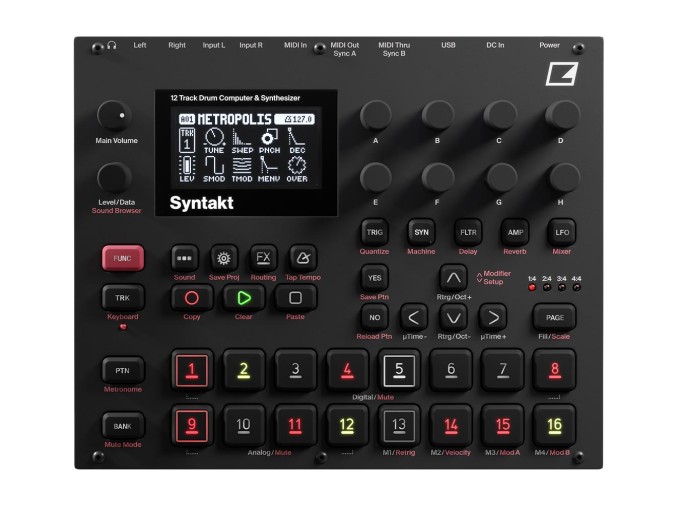 Elegant form, powerful control, and flexible sound across both analog and digital paradigms—Syntakt, a 12-voice hybrid Drum Computer and Synthesizer, is the culmination of more than 20 years of Elektron instrument design. Packed into the same form factor as the hit Digitakt and Digitone, Syntakt is both familiar and new, delivering everything to be loved about an Elektron device while pushing the envelope with new features. The 12 tracks are split into eight digital and four analog, the latter of which are further divided into three Analog Drum tracks and one Analog Cymbal. But with the new Trig Modifiers and FX Track, you're equipped with more ways to shape your grooves and beats than ever before.

At its core, Syntakt employs the same parameterization style as many of the Elektron instruments that came before it, through the use of sound engines known as Machines. Across the whole device, there are over 30 Machines to choose from, covering a number of percussion archetypes ranging from kicks and snares to cymbals, cowbells, and more. But there are also general-purpose synthesis Machines available on both the analog and digital sides, which are vital in supplementing rhythms with basses, melodies, and even chords. Machines are then processed by a multimode filter—which is fully analog on the analog tracks—with the option of further shaping through digital envelopes and dual LFOs on every track.

But if you somehow crave even more sonic sculpting, take a look at the FX Track. Borrowing the idea from Elektron's flagship devices, the Syntakt FX Track boasts an analog processing block, consisting of a multimode filter and VCA. Any and all of Syntakt's tracks can be routed into the FX Track, as well as the digital Delay and Reverb effects plus any sounds coming from the external audio inputs. Best of all, the FX Track contains its own independent sequencer, opening the door to synchronized sidechain-like effects, global level filtering, and even modulation and sequencing of the Delay and Reverb effects—something which cannot be done on the Digitakt or Digitone.

Speaking of sequencing, the classic Elektron sequencer returns once again, arriving in full force to maximize the musical mileage you can get out of Syntakt. Each track supports up to 64 steps, with the option for independent lengths and time scaling relative to the pattern tempo. For meticulous levels of precision, parameters may be modified on a per-step basis, events may be triggered through conditions or probabilities, and Syntakt can even recall different sounds at an instant, packing more sonic variety into a single sequence than most instruments can achieve across banks of presets. Additionally, any of Syntakt's 12 tracks can be configured as a MIDI sequencer, bypassing the sound generators entirely and enabling control of other instruments.

Syntakt also provides a new way to bring life, variation, and improvisation to your sequences through a concept called Trig Modifiers. These Modifiers are a way to manually trigger voices with one of four different modifications: automatic retriggers, different velocity levels, or two other assignable parameters. Simply choose your Modifier of choice, assign four values you'd like to recall, and the door is opened to performative accents, manual arpeggiation, and a number of other creative possibilities. Trig Modifiers can be applied to any number of tracks at once, and can even be recorded to the sequencer as Retrig or Parameter Locks in Live Recording mode.

Like most other Elektron instruments, Syntakt provides full Overbridge support, seamlessly connecting with your computer and DAW of choice for streamlined control and independent recording of tracks. Like Digitakt and Digitone, Syntakt can also function as a Class-Compliant USB audio interface, giving it enhanced desirability as part of any performance setup involving computers, smartphones, and tablets. Elektron has easily proven that they know a thing or two about drum machines over the years, and Syntakt is tangible proof that they intend to lead the pack for years to come.

Syntakt is an incredibly versatile marriage between raw analog power and the precision of digital prowess - featuring 8 flexible digital tracks, 4 analog tracks, and an assignable global FX track, the Syntakt draws inspiration from every corner of Elektron's storied legacy.

Syntakt Round-Up ! A Casual Conversation About Elektron's Newest Synthesizer & Drum Machine
Mario and Wes reconnected last week to touch base about some Syntakt details that they didn't get to explore at launch !
After such an exciting week we decided to relax a bit and just have fun, we hope you're doing the same!
Best Gear of the Year : 2022 Artists Picks Part 1
It's nearing the end of another monumental year in synthesizers and pro-audio, and we look back with our friends on some of our favorite pieces of kit we tried out in 2022!
Best Synth Gear of the Year : Staff Picks
It's almost a wrap on 2022, the end of another monumental year in synthesizers and pro-audio.
We live for music gear here at Perfect Circuit, so we talked to our staff about their FAVORITE gear of the year !
Elektron Syntakt 12-Voice Drum Computer and Synthesizer Reviews
Register with :