Today, ASM announced the newest update to their immensely successful Hydrasynth. And its new features bode well for its continued success: adding everything from microtuning to complex new modulation options, the Hydrasynth is now significantly more powerful than ever before. This isn't the first new update for the instrument; 1.3 earlier this year added MPE support and the much loved "Warm Mode," while 1.4 added a new Mutator among other features. Firmware 1.5, though, is quite a large release, adding tons of new features all across the board.

Hydrasynth's 1.5 update adds several new updates directly to the audio path. The most obvious addition is a significant addition of new filter types.

The first new types are borrowed from classic Steiner-Parker designs. Filter 1 now includes dedicated lowpass, bandpass, and highpass 12dB/oct Steiner-style filter, complete with their much-loved nonlinearities and subtle instabilities. For those of you that haven't used a Steiner bandpass filter—they're absolutely magic. If you need fizzy, edgy bandpasses and colorful resonance, these new filter additional will provide a significant expansion to your Hydrasynth's tonal palette.

Filter 1 now also includes a one-pole lowpass filter inspired by the Oberheim Xpander, as well as an eight-pole (yes, eight-pole) lowpass filter perfect for significantly blocking out high frequencies. The one-pole option is wonderful for harmonically rich sounds that need a subtle roll-off, and the eight-pole filter is perfect for carving out space in sounds comprised of several sonic layers or textures. Filter 2 adds a second morphing filter response: a morphing lowpass/notch/highpass response based on the Oberheim SEM. Having this option opens up a huge range of new sounds—and of course, by routing different sound sources to each filter and setting the filters to run in parallel, it becomes easier than ever to create multiple distinct textures that evolve in tandem with one another.

Of course, the other significant update to the audio path is the addition of the distortion effect type, available in both the pre-FX and post-FX sections. The distortion features controls for drive, tone, asymmetry, distortion curve, and overall output level compensation—and as with the other effects, several of these internal controls is accessible in the modulation matrix, making it easy to dial in gritty sonic animations. A special note: using the distortion in the Post-FX position is an excellent way to get some classic distorted reverbs and shoegaze delays. 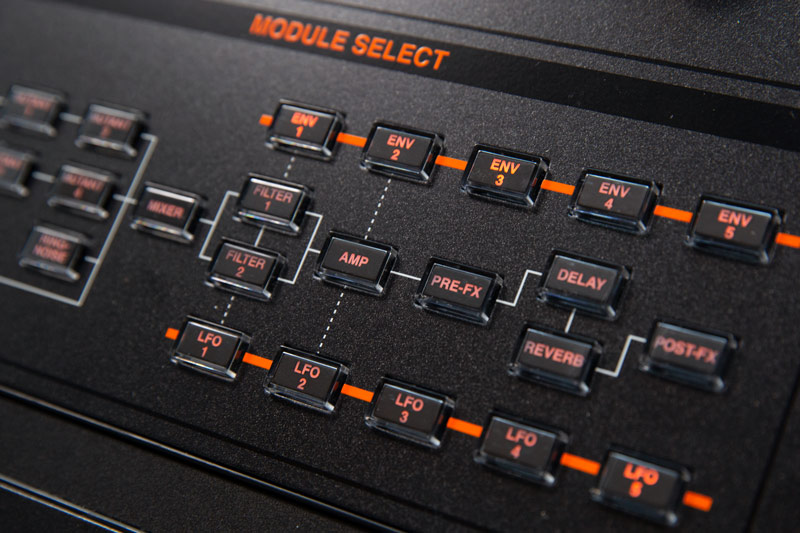 Hydrasynth firmware 1.5 also now offers support for microtonal tuning. The firmware includes several interesting scales, from Partch's 43-tone scale to other Just and folk-inspired tunings. Additionally, users can even add their own custom tunings using SysEx transfer of typical files in MIDI Tuning Standard. So if you're super into Just intonation or interested in experimenting with alternate tuning systems, the Hydrasynth can now help.

Also worth noting—Latch now works even when the arpeggiator is turned off. This is a great way to experiment with drones, or to keep your VCA open while working with some of the more interesting new modulation options...which brings us to the next set of updates.

While new filter types and distortion are definitely exciting, I personal am most intrigued by the new modulation options. For instance, several new parameters are now accessible as destinations in the Mod Matrix. Many Voice menu parameters, for instance, can now be influenced via the mod matrix: detune, analog feel, pitch bend amount, vibrato amount, vibrato rate, and glide time are all available destinations. This can be a great way to add dynamic vibrato via keyboard aftertouch, or to use envelopes to gradually increase and decrease the amount of detuning in Unison patches.

Perhaps even more exciting, though, is that Macros can now be modulated. In earlier firmwares, I often found that automating the Macros by hand became part of my performance style. Now, though, you can assign any modulation source to impact a macro. This makes it possible to use a single modulation source to impact eight parameters per macro—and in the most extreme cases, a single modulation source could control up to 88 parameters simultaneously. This can free up a lot of redundant routing in the mod matrix—if you set up multiple parameters as part of a macro, you no longer need to set an individual slot in your mod matrix for each of those parameters. 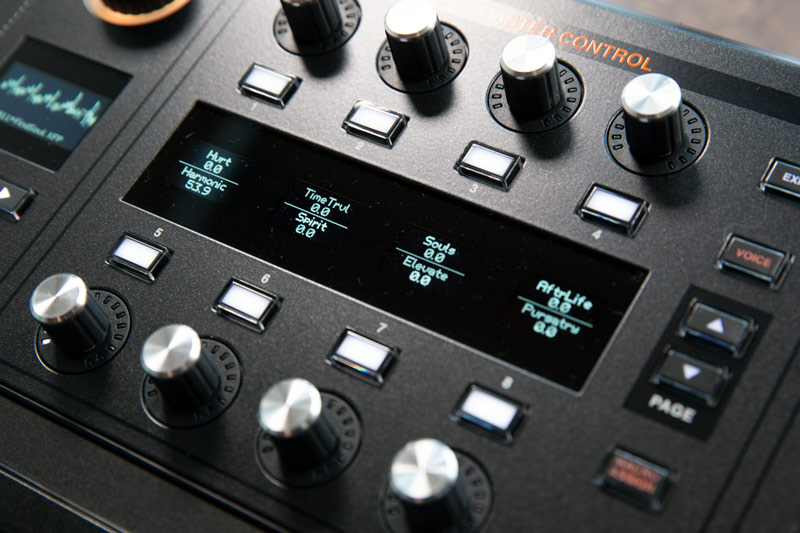 Another remarkable new feature: envelope gate source selection. Previously, the envelopes were triggered by default by the keyboard—and there was no way to defeat this internal connection. For users used to working with modular systems, however, this might seem unnecessarily limiting. Knowing that the Hydrasynth had been inspired by part by the workflow of the Oberheim Matrix-12 and Xpander, I found it curious that the envelopes were so directly tied to the keyboard.

In the newest firmware, envelopes can be triggered from up to four sources each. These sources include the keyboard, ribbon controller onset, ribbon controller release, each of the LFOs, and the two Mod inputs. This makes it where you can trigger the Hydrasynth's envelopes from external modular gear, or from other internal modulation sources! And when triggering from an LFO, the "trigger" happens at the beginning of the LFO's cycle regardless of its shape (no need to set your LFO to a square wave just to trigger the envelopes). This makes it possible to create much deeper modulation, and along with this comes the ability to more effectively divide up the Hydrasynth's internal resources into several independent layers. For example, you could use three envelopes to modulate each oscillator's level in the mixer, and then use independent LFOs to trigger each of these envelopes. This makes it easy to create a sense of multiple independent voices within even monophonic patches...especially when combined with the new additions to the Step LFO.

The step LFO has been expanded to permit up to 64 steps, making it possible to create even longer, more intricate modulation sequences. But what's more, the step LFO now features a "semi-lock" mode, which effectively snaps the step values to increments that, when routed through the mod matrix to oscillator pitch, conform to an equal-tempered scale. This means that using the step LFO as a pitch sequencer is dead simple—and if you trigger an envelope from a step LFO, the envelope retriggers on each step rather than once per total cycle. If you play your cards right, the combination of multiple step LFOs can mimic the behavior of a typical sequencer...or, of course, running multiple step LFOs at different rates or lengths can create phasing, kaleidoscopic patterns difficult to create through other means. With three LFOs, three envelopes, and three oscillators, you can create intricate counterpoint—and that leaves two LFOs and envelopes to do whatever else you might please.

And of course, the 1.5 update also contains some extra niceties not directly related to the audio or control systems. Perhaps the most exciting are the new randomization options—when randomizing a patch, you can now choose a randomization percentage for each module group. This is great if, for instance, you want to randomize all of the oscillators slightly but the filter more dramatically. Or, if you're looking for subtle variations on a patch, you could only slightly modulate everything and see where chance takes you. Additionally, a new random option allows you to randomly combine settings from multiple patches in memory. This leads to often unexpected and uncanny results that are based on intentional programming decisions, but combine them in ways you might not think to in normal circumstances. The results here seem distinct from all-out randomization, and often lead to immediately usable an exciting results.

The pitch CV output now supports 1.2V/Oct tuning standard, making it possible to use the HS as a pitch control source for Buchla or vintage EML synthesizers. Most internal parameters can also now be controlled via CC rather than NRPN—resulting in lower resolution when automated from external sources, but making things more easily controllable from most DAWs. You can also set a default preset to load when the unit turns on—and for users of the Desktop version, you can save your pad settings as well.

This is a major update to the Hydrasynth's capabilities—each one of these options opens a completely new dimension of sonic possibilities, and when used in combination, they can lead to results that I couldn't imagine approaching on any other instrument. ASM has consistently done an amazing job with the Hydrasynth: it came out the gate super strong, and they have constantly listened to user requests and refined the instrument to accommodate their needs. Constantly evolving, the Hydrasynth is no doubt solidifying its position as a future classic.