ASM's Hydrasynth is one of the most interesting synthesizers that has come along in quite some time: by taking a boldly digital approach, it packs an enormous amount of flexibility into an affordable and well-built package. Despite ASM seemingly emerging from nowhere in early September, they have already demonstrated an enormous amount of potential.

There's a lot to say about the Hydrasynth: polyphonic aftertouch, global and per-module randomization, loads of modulation options, CV I/O—having spent a good amount of time with it, I can attest that it's easy to get lost in its seemingly endless feature list. If you're curious about ASM and the Hydrasynth's design motivations, check out this interview with ASM's design director Glen Darcey; but in this article, I'm going to hone in on what for me feels like the core of the Hydrasynth's sound: the oscillators and mutators.

What is WaveScan Synthesis?

Hydrasynth is an eight-voice synthesizer with three oscillators per voice. Oscillators one and two can operate in either WaveScan mode or Single mode; oscillator three is always in Single mode.

So let's talk about Single mode first. In this mode, the oscillator can be set to any one of the Hydrasynth's 219 pre-set wave shapes. The first handful of shapes are relatively simple virtual analog shapes—triangles, saws, squares, and the likes—but the remainder are organized in small groups of similar shapes, ranging from early '80s digital tones to grinding, edgy timbres. Blending sounds like these between the three oscillators already has a huge amount of potential: especially with the capacity for transposition and detuning per oscillator, one can construct huge sounds simply not possible with more conventional oscillators. 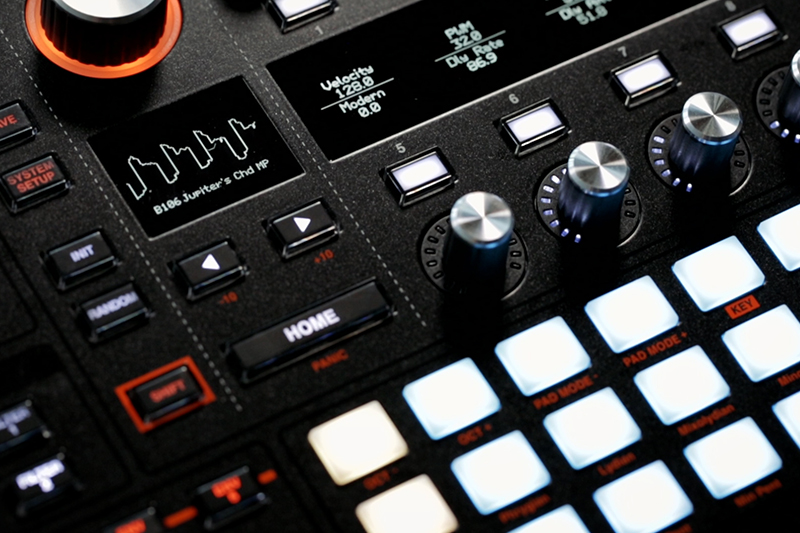 Even in single mode, the wave shape is a valid modulation destination: this is, in effect, a type of wavetable synthesis...one with a table of 219 discrete shapes. Unlike most old-school wavetable synths, this large table of shapes is not organized in such a way that it creates the most continuous transitions between shapes—in fact, many such instruments would use 64 or 128 more-or-less similar shapes in a single table as a means of smoothly transitioning between their starting and ending shapes. Modulating "shape" in this way provides a considerably more jarring effect—and sometimes, "jarring" is what you want.

When jarring sounds are undesirable, however, there's WaveScan mode. WaveScan provides access to distinctly more Prophet VS-style smooth sounds (though it is not without its own potential for sonic mayhem). In WaveScan, users can define arbitrary lists of up to eight wave shapes from the bank of 219 preset shapes, using the WaveScan parameter to smoothly morph between them. Sweeping WaveScan manually instantly conjures the feeling of moving a vector synthesizer's joystick—similarly, using smooth modulation (via envelope or LFO) can produce lush, ever-changing timbres. Polyphonic aftertouch, of course, also works wonders once a desirable combination of waves has been selected.

And that's all there is to the oscillators themselves! While wavetable-style techniques are cool, you might still be wondering where all the other cool oscillator tricks are hiding: sync, pulse width modulation, FM, and all the stuff we're used to seeing in analog oscillators. Worry not, as these techniques are available—but they're implemented in truly uncommon ways, in modules called Mutators (or "Mutants," on the front panel module select buttons).

The Mutators can be thought of as oscillator modifiers: they provide several modes for warping the oscillators' output and can be continuously blended with the direct oscillator signal—making them in some ways more like highly mutable effects than traditional forms of sync, FM, etc. might allow. Their implementation is unique, and provides a lot of powerful potential for sound design. Oscillators one and two feature two mutators each, which are connected in series before the mixer...however, given the wet/dry blend option for each mutator, pseudo-parallel configurations are still possible.

The first Mutator type is Linear FM, with a couple of unexpected twists. Using the linear FM Mutator type provides several ways of performing two-operator FM: the oscillator is always used as the carrier signal, but the Source parameter determines which signal is used as the modulator. The options for source are surprisingly open-ended: any of the three oscillators, any of the four mutators, the ring mod, noise, and CV Mod inputs can all act as FM sources—or a sine or triangle wave originating from the Mutator itself can be used. When the Mutator's self-generated sine or triangle modulator is used, the tuning ratio can be determined within the Mutator edit page itself; when another oscillator or Mutator is used, tuning must be adjusted at the source.

The Linear FM Mutator even has a dedicated control for feedback amount (with a range of 0% to 150%), great for replicating the affect of the noisy, metallic FM feedback algorithms from classic DX synths and others. This brings up an important point: the Hydrasynth leaves signal flow pretty open-ended in places where many synths will proclude connections that could lead to "unmusical" results. You can cross-modulate between Mutators, introduce feedback in tons of places, and create chaotic modulation routings...and while many might find the effects of these types of connections a bit extreme, I'm happy that ASM chose to leave aesthetic distinctions up to the user rather than sectioning off concepts that might lead to more intense sorts of sounds.

Another Mutator type is Oscillator Sync...and while this is capable of a familiar sync workflow and sound, it operates on a fairly different principle than typical sync methods in analog gear. In analog synths, hard sync effects are usually produced by using one oscillator to reset the phase of another oscillator—as the master oscillator exceeds the slave oscillator's pitch, a crude form of pitch tracking occurs, which results in significant changes to the sound's timbre. Soft sync can work in a number of ways, often using one waveform to invert the direction of another for crude pitch-based effects with their own distinct character.

In the Hydrasynth, Oscillator Sync allows the user to determine the Ratio at which the sync process occurs relative to the master and slave oscillators. Typical sync is 1:1...that is, the slave oscillator is synced once every cycle of the master. In the Hydrasynth, though, other ratios can be chosen: sync can occur once every 3.5 cycles, or fifteen times a cycle—as well as between or beyond these values.

This has a lot of potential uses. With relatively modest settings, this makes it possible to adjust traditional sync-style effects without needing to modify the frequency of the sync master oscillator directly: instead, you can simply adjust the Sync ratio and get to similar results without needing to leave the Mutator page. But of course, combined with the Window, Feedback, Depth, and blend controls, a huge number of fresh, bizarre sounds are also accessible.

And then there are three distinct Pulse Width Modulation (PWM) methods...though as we'll quickly see, the term "PWM" is slightly misleading. PWM in the Hydrasynth is not restricted to pulse waves—it can be used to manipulate any waveshape, with each PWM method providing a slightly different means of slicing a waveshape into sections and adjusting them relative to one another. 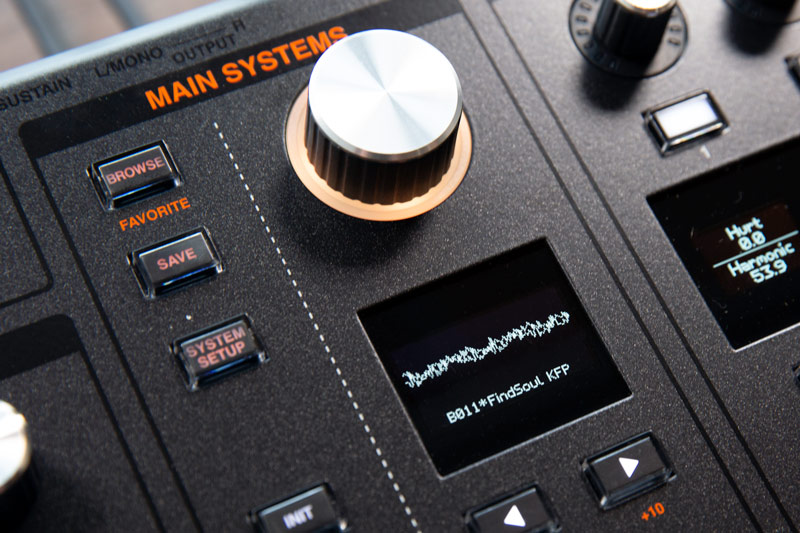 The first PWM type is called PW-Orig: this method is most similar to vintage-style PWM. By selecting the square waveshape and adjusting or modulating the depth, you can approximate traditional PWM effects...but there are, of course, some additional atypical controls. The Ratio parameter is much like the Ratio control for Oscillator Sync—it determines how many time a full PWM sweep occurs within a single cycle of the waveform. By choosing integer ratios, you generate fairly stable sounds; near-integer ratios will create cascading animations; and altogether inharmonic ratios will result in much more chaotic behaviors. And, like in other Mutator types, there is a dedicated Feedback control, which can produce effects ranging from saturation to peculiar metallic resonances.

The second type is PW-Sqeez, which in effect is somewhat more like skewing a waveshape forward in time, so that the majority of a waveshape's internal movement appears to concentrate "toward the right." This, too, can work on any waveshape and has an adjustable ratio control...so again, near harmonic ratios, this effect will seem more or less stable, with increasingly apparent fluctuations as the Ratio setting drifts further from integer values. Oh yeah—feedback is still an option here.

Detail of the Hydrasynth's Module Select buttons—invaluable for navigating the modulation matrix.
× 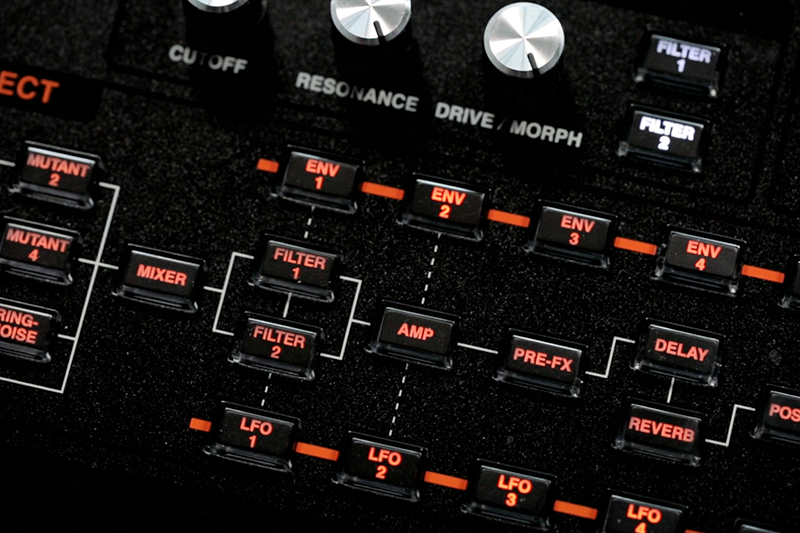 In my experience so far, the final PWM type is harder to get into territory resembling traditional PWM...in fact, the manual indicates that it is more akin to FM than PWM per se. PWM-ASM [Warp] mode allows the user to define eight "Warp points" along the waveform, creating highly customizable deformations that sound not dissimilar to wavefolding or waveshaping methods common to modular synthesizers. The Depth control determines how strong the overall effect is, while the by-now-familiar Ratio and Feedback controls continue to work their magic.

So you might now understand why it feels a bit odd to refer to all of these PWM methods as such: honestly, the term feels a bit reductive. Each of these PWM types does way more than simply making buzzy square wave sounds, and each truly does have its own distinct sonic character, though there can be overlap between them.

The next Mutator type is WaveStack: a means of generating thick, detuned sounds without needing tons of oscillators. By copying and detuning the sound of the core oscillator, WaveStack makes for buzzing, swarming sounds that can operate completely polyphonically—that is to say, you don't need to go into Unison mode and dedicate several voices' worth of oscillators to get huge-sounding clusters. If you want to make chorus-y polysynth sounds that scream "1980s," WaveStack is a solid place to start.

The final Mutator type is Harmonic, a way of emphasizing or de-emphasizing particular overtones in a waveform (this is somewhat similar to one of the filter types in the Technos Acxel, discussed in greater depth in a video here). With this Mutator type, Ratio selects the emphasized overtone, and Depth controls the range of harmonics allowed to pass: so it may be obvious, but the effect of the Harmonic Mutator is most pronounced when used with harmonically rich waveforms. Unlike other Mutators where the Feedback control tends to make things more edgy and harsh, Feedback in the Harmonic Mutator often softens the final result due to accumulated phase cancellation.

It is worth interjecting here that one of the biggest complaints I have seen so far about this synthesizer is that it is not multitimbral...but honestly, given the rich opportunity for modulation and the sheer number of sonic resources within a single voice, multitimbral effects are entirely within reach—they just need to be approached in a slightly different way than in overtly multitimbral synthesizers. By treating individual oscillators or Mutators as essentially distinct entities (completely with the possibility of routing them into their own separate filters), there is nothing stopping exploration into multitimbral textures...even if that isn't what ASM has called them on paper.

Honestly, a single oscillator and a single Mutator in the Hydrasynth can already do more than many synthesizers would allow in their entirety...and of course, having three oscillators, four Mutators, and the rest of the synth's whole signal flow makes for an absurdly powerful instrument. Mutators are cascaded into one another, can be used as signal sources for one another, and can result in knotted, complex signal paths with uncommonly rich results: it is safe to say that the Hydrasynth rewards patient experimentation and careful listening. This, for me, is a fairly clear encapsulation of what makes the Hydrasynth so great: any synthesizer that so directly rewards careful listening and attentive sound design will no doubt produce sounds inspiring both to their creators and to their audience.