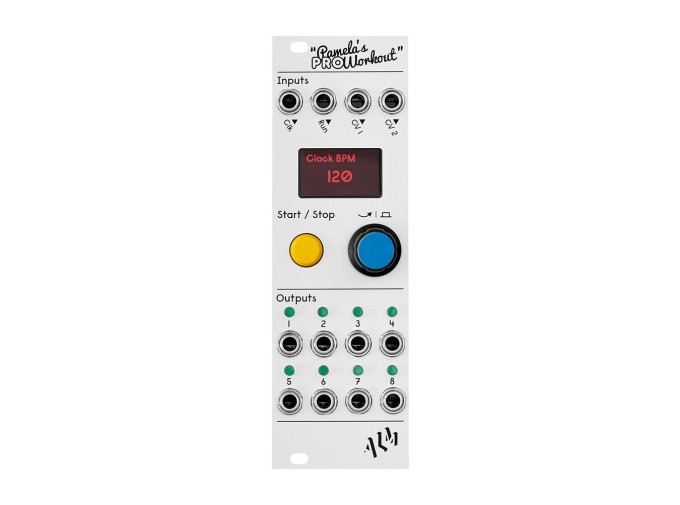 Improved once again, Pamela's Pro Workout is the latest version of ALM's multifunction clocking and modulation Eurorack module. At its most basic settings, this module is an eight-channel source of clock generators, with the ability for each channel to be set to a specified multiplication or division of the global BPM. But over the years, Pam picked up some new exercises and routines in her thorough studies of physical fitness, and her Pro Workout is the most capable version yet. And with the enhanced display, you'll be making use of these new features in no time.

Pam's channels are configured through the use of a program encoder, with various pages, menus, and settings available through scrolling, pressing, and holding the blue knob. You can set the global tempo to be anywhere from 10 to 330 BPM, but this range is drastically increased through the use of per-channel modifiers to multiply or divide the rate of clocks. Pam's Pro can multiply up to 192x the specified tempo or drop down to a mind-bogglingly slow /16384. This alone offers incredible flexibility in developing a variety of clock sources for your Eurorack system, but that's only the beginning.

When scrolling through channels, hold down the program encoder to access extended parameters—and it's here where Pamela's Pro Workout will really turn up the heat. Rather than being solely limited to clock trigger pulses, each channel can also be assigned to a number of different waveforms for tempo-synced LFOs, streams of envelopes, or even random voltages. From typical shapes like Sine and Triangle to Trapezoidal, parabolic, and ratcheted pulses, there's more variety than ever before. You can even define parameters like Width/Slew, Offset, Level, and Phase to scale, shift, and otherwise shape different waveforms to your whim.

Pamela's Pro Workout also contains some nice ways to de-lineate, loop, and skew the rhythms and waveforms that each channel can produce. We all love Euclidean rhythms in Eurorack, and Pam's packs in one of the best implementations: simple define the number of steps for the algorithm to be applied to, the number of triggers within that range, and rotate the active steps within that set for generating offbeats or pad the end of a pattern with empty space to round out odd meters. To keep even the wildest rhyhtms on a tight leash, the Loop parameter can specify the number of real-time beats that can be pass before a forced reset occurs—this is also handy for creating pseudo-sequences out of random voltages.

Want to use Pam's in a melodic context? There's an internal quantizer that can be enabled to map a channel's output to a specified musical scale. You've got everything from the traditional major and minor scales to harmonic minor, pentatonic, and Japanese scales. If the tonality that you're seeking isn't built into the module, there's also an option to specify three different user scales. This is a great feature to combine with random voltages or to great arpeggios from LFOs.

One of the most exciting new features found on Pam's Pro is Cross Operations. Replacing the Logic feature from Pam's NEW Workout, you can now internally mix, sum, subtract, or mask the output of one channel with another. Extended logic functions remain for raw trigger operations, and it's also possible do neat things like re-seed another channels random voltage generator or apply sample and hold-like relationships. Another enhancement is found in the form of Flex Operations, where you can humanize a stream of pulses with slight timing inconsistencies, ramp a channel's step time up or down, or apply swing.

If all that wasn't enough, Pam's Pro has two CV inputs that can be assigned to nearly any parameter. You can expand the fun further with ALM's Axon-1 expander to add four additional control inputs. And for the MIDI and DIN Sync users out there, new expanders will be available in the near future. Pamela's Workout didn't become one of the most popular Eurorack modules overnight, but thanks to dedicated fans and continued support and updates from ALM, it garnered a larger than life reputation. With Pam's Pro Workout, your clocking game will be leveled up once more, and whether you prefer tight-locked grooves or totally arrhytmic generative or ambient textures, Pamela will have something to offer for anyone.

’Pamela’s PRO Workout’ is a compact programmable clocked modulation source providing 8 highly editable outputs that can produce everything from simple clocked triggers and complex rhythmic wave forms to quantised melodic patterns, random chaos and more, all correlated and synced to a BPM based master clock.