One of Eurorack's best and most flexible modules just got even better: ALM's freshly updated Pamela's Pro Workout is here to raise the bar of clocking and synced modulation once again. Wider tempo ranges, more multipliers and dividers, new Cross and Flex Operations, and a whole host of new features and improvements are here to offer even more inspiration for your patches.

The previous version, Pamela's NEW Workout, was one of our favorite modules here at Perfect Circuit, and we know it was beloved by countless other Eurorack aficionados—at the time of originally writing this article, PNW is still the most popular module on ModularGrid. But ALM knew they could push the concept of Pam's even further, and we think you'll like what this Pro version has to offer, too. Check out what our Patch Pal Wes cooks up in our video above, and read on to reminisce on the history of Pamela and catch up on what she's got going on in her all-new Pro Workout.

What's With All the Hype For Pam's Workout?

Alongside other feature-packed Eurorack modules like Make Noise's Maths or the Disting by Expert Sleepers, Pamela's Workout, in one form or another, has become a module that nearly anyone involved with modular synthesizers will know about. And for good reason—whether you specialize in ambient textures, driving techno, or totally abstract generative patches, it's almost always helpful to have some kind of flexible timing and clock source. That's where Pamela comes in.

The original Pamela's Workout was the very first ALM module, and immediately laid the foundation for what their later modules would be all about: characterful design matched with superb functionality. So long as you didn't mind a little bit of menu programming, the first Pam's excelled at being a compact, multi-channel clock source for performance rigs. From simple clock division and multiplication to random trigger skips and timing delays, Pamela changed the game of Eurorack clocking back in 2012. Thanks to the module's digital brain, rates could be as slow as /512 or up to 48x faster on a per channel basis. And if you wanted to control Pam externally, that was easily possible too.

But there's always room for improvement, and so Pamela's NEW Workout came along in 2017. Aside from some user interface tweaks and clock stability improvements, the NEW Pam's extended way beyond simple triggers and gates and into tempo-synchronized modulation signals. Indeed, a number of continuous waveforms—such as triangle, sine, envelope, and random—were now available to be stretched across musical durations. These waveforms aren't necessarily static either, since there are numerous controls to shape, skew, and phase shift the wave outputs.

Besides the addition of continuous waveforms, Pamela's NEW Workout also brought new rhythmic and pseudo-sequencing options to the table. A straightforward implementation of the Euclidean algorithm means that you're not strictly limited to constant streams of pulses, and logic operations between channels allow for inter-related rhythms to be achieved. You can even apply output quantization to musical scales on each channel, allowing for random or cyclical melodies to be created. And of course, we can't forget about the two expanders, which allow Pam's to clock MIDI and DIN Sync gear with ease.

An Overview of Pamela's Pro Workout

Stepping up to a new weight-class, Pamela's Pro Workout once again packs in better performance and new features. Most obviously, this version of Pam's has a new, larger screen similar to the one found on the MFX, which should make menu navigation tremendously easier. Each channel also sports an output resolution of 12 bits, offering more precision for pitch CV and prior situations where audible stepping would occur in waveform modes. But otherwise, Pam's Pro maintains an identical layout to the prior version—it's still 8hp, has eight channels, and a whole lot of functionality.

In her Pro form, Pamela offers her most powerful clocking capabilities yet. Overall tempo rates now range from 10-330 BPM, but the dividers and multipliers ratios saw their most substantial increase yet. Clocks can now fire off at up to 192x the global tempo, or divide down to a glacially slow /16384—the official specs list a maximum frequency of 3.8kHz (roughly a Bb7 for the music nerds out there), but if our math is correct you can also go as slow as one trigger every 27 hours. Whether or not you would actually need to go that slow remains to be seen, but we're already imagining the excitement of hearing that trigger fire off during a multi-day installation or live stream.

Replacing the Logic feature of Pam's NEW Workout is an enhanced Cross Operations mode, which includes the previous functionality plus some new fun tricks. Now, rather than needing an external mixer, it's possible to sum Pam channels internally or combine in channels in other novel ways. There's pure addition or subtraction, internal sample and hold triggered by other channels, extended logic options, the ability to re-seed random output from another channel, and a whole bunch of other modes. When you consider the implications of this feature along with everything else that Pam's can do, you'll start bursting with ideas of creative patches to try.

In the previous version of Pam's, there was a parameter called Slop which imparted slight timing drift as a way to humanize the output of steady clocks and rhyhtms. Now, there's a whole Flex Operations menu which includes that same feature (renamed Human) and other micro-timing functions. You can impart swing, ramps up or down in tempo, or hump which ramps back and forth in both directions. And like nearly other parameter within Pam's, these can also be assigned external CV sources for dynamic shifts in rhythm and timing.

Speaking of external sources, Pamela's Pro Workout will have its own set of companion expander modules in the near future. At the time of launch, the PEXP-1 and PEXP-2 expanders for Pamela's NEW Workout aren't supported with the Pro version, but we're sure it won't be long before those come along. But that's not all—Pam's Pro can also be connected to an Axon-1 expander, which was already compatible with the Squid Salmple and MFX. Now, in addition to the two built-in CV inputs, you can add four more external inputs for further modulation of Pam's parameters.

Nearly other aspect of Pam's has seen some form of improvement as well. There are several new continuous waveforms, like trapezoid, slewed random, and logarithmic envelope, and these may all be scaled, stretched, and shifted around. The scale quantizer interface has been totally revamped to take advantage of the new screen, and there's a new option to save up to three user scales. Euclidean sequencing now offers an option called "Padding" which adds additional empty steps onto the end of a pattern, offering further variation into generated rhythms.

Turning Up the Heat

Whether you call in, submit an email inquiry, or visit our shop seeking advice on a new module to shake up your clocking setup, Pam's is almost always going to be one of our go-to suggestions. With all of the different Eurorack modules that are available these days, it's actually pretty remarkable to hold some amount of universal appeal and acclaim to the degree of Pamela's Workout. And in the new Pro Workout, Pamela is better than ever, and she's got plenty of tricks up her sleeve to bring even more interest to your patches.

Pair These With Pam's Pro Workout 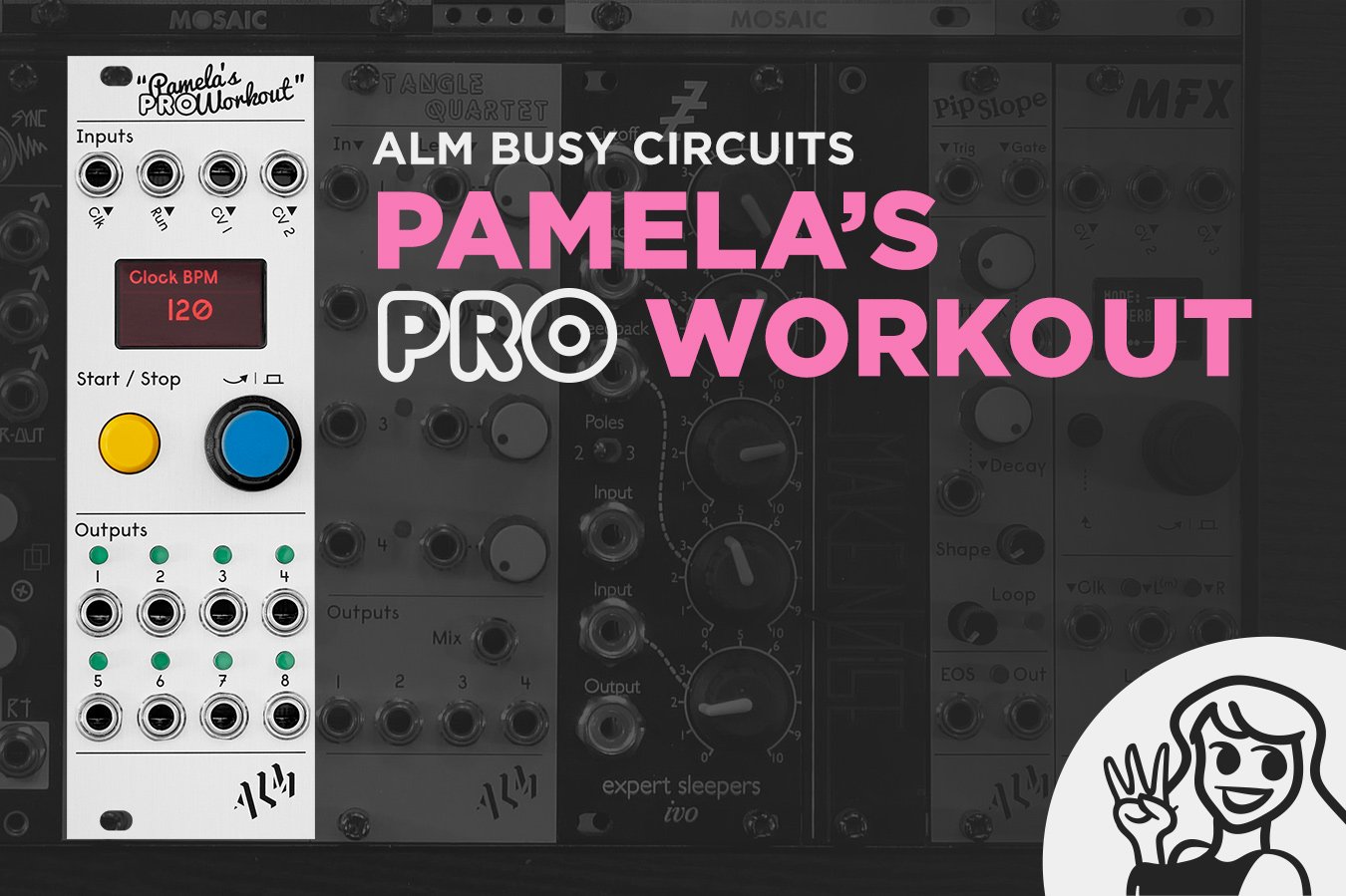 The Year is 2022, and the Moog Minimoog Model D is Back

A Look 50+ Years of Minimoog History and Its Newest Iteration