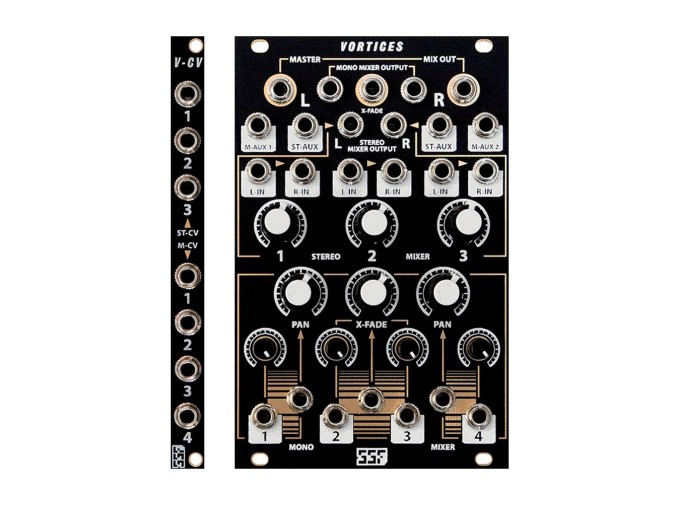 Promising to provide the character of old consoles and magnetic tape machines, Steady State Fate's Vortices is a highly flexible Eurorack mixer with stereo capabilities and dynamic response inspired by classic analog devices. Vortices may be effectively divided into two halves: a mono mixer on the bottom, and stereo mixer up top.

The mono mixer section of Vortices supports four input sources, with channels one and four offering voltage-controllable panning, while two and three are fed into a crossfader with CV control. All the panning and crossfade controls offer a unique linear panning curve, yielding only a slight volume reduction at the center position, even when compared to constant power panning curves. Most Eurorack signals piped into the mono channels will be at unity gain at around 12 o'clock, and pushing up the level from there imparts tape-inspired saturation and compression.

By comparison, the stereo mixer section is a bit more tame than its mono counterpart—it won't start overdriving until the level controls are pushed well past 3 o'clock. However, it does offer the convenience of mono-to-stereo normalization when plugging a signal into the left input on any channel, and the auxiliary inputs facilitate easy integration of effects, chaining external submixes, or feedback patching.

If that wasn't enough, Vortices comes with a handy 2hp expander allowing for voltage control over each channel's volume level. While many systems can provide external management of dynamics prior to entering the Vortices channel inputs, this is certainly a nice touch for smaller systems or situations where one might want control over the saturation characteristics that Vortices has to offer. By incorporating ideal traits from the tape decks and consoles of yesteryear, Vortices is sure to be a hit with anyone looking for a Eurorack mixer with a vibe of its own.

Note: before using the included V-CV expander with Vortices, please read the V-CV section of the manual. When using the expander, the switch between the panel and PCB on Vortices must be set to EXP to avoid damage to the modules.