Being a synthesizer store, we often get so carried away with the constant influx of alluring new sound machines that we forget that most of us enter this planet with a fascinating and flexible musical instrument built in—our voice. As with any other instrument, some training might be needed in order to be able to express musical ideas with it, and in some special cases it may be wise to stick to guitars and synthesizers for everyone's safety...nevertheless, each voice is a unique tool that possesses incredible power when used skillfully.

Now, of course, we do still love gear. Can't help it—we really love toys that make and break sounds. However, realizing that there is a gap in our video repertoire, we've decided to repair a missing link by interweaving the two worlds: the one that we know (effects pedals), and the one that we know less about (singing). We invited the talented singer Katrina Cain to our studio to demonstrate some very specific techniques that can be immensely helpful when processing vocals through the effects. We all know by now how to use pedals with guitars and synthesizers...but now, it is time to plug in our voices. 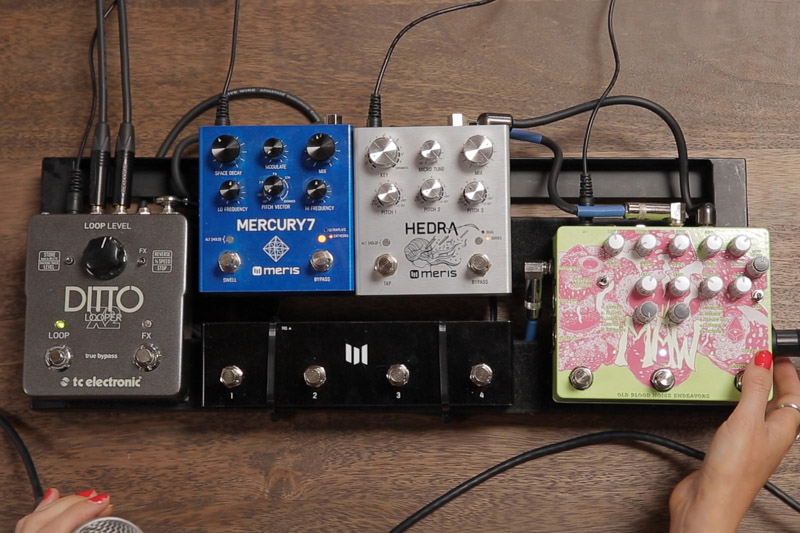 For our first ever video exploring the intersection of vocals and effects, we decided not to go overboard and landed on a simple and effective setup consisting of four powerful pedals: Old Blood Noise Endeavours MAW, Meris Hedra, Meris Mercury7 (supported by the convenient Preset Switch Pedal), and the TC Electronic Ditto x2 Looper. Don't let this small selection of pedals fool you though, as each one is unique and feature-rich. Combined, they form an uncommonly mighty quartet.

OBNE MAW is where everything begins on Katrina's pedalboard. MAW stands for Microphone Audio Workstation, and equipped with an XLR input, it is an ideal choice for any vocal processing rig. The pedal contains 10 quality effects onboard including reverbs, delays, flanger, phaser, rotary, and octave shifter. Moreover, it sports a dedicated switchable saturator to add an expressly gritty flavor to the tone. Two effects can be combined at a time, fostering a multitude of combinations. MAW is also equipped with send/return channels, allowing you to inject additional effects into the chain, which, based on Katrina's preferred chain, brings us to the next pedal—Meris Hedra.

Hedra is a rhythmic pitch-shifter and harmonizer effect unlike any other. It spans +/- two octaves, and supports both scale-quantized and unquantized behavior, micro tuning adjustments per voice, and a multitude of other features. What makes it "rhythmic" is that each pitch-shifter can be individually delayed by a division of the master clock, thus opening the possibilities for cascading melodies and spread out harmonies. Furthermore, four drastically different delay modes open up the possibilities of this pedal far beyond what traditional harmonizer effects can do.

Next in line is Mercury7—the Bladerunner-inspired high-fidelity ethereal reverb pedal with two uniquely crafted algorithms (Ultraplate and Cathedra), and a well-thought-out selection of parameters. Particularly noteworthy is the inclusion of Pitch Vector, which when engaged can instill anything from low octave drones to a full-on shimmer into the mix. Mercury7 can easily perform functions of a traditional reverb, yet as it is often the case with Meris pedals, both internal and external modulation of the effect's parameters are highly encouraged, and this is a sure path to wilder underexplored sonic territories.

Lastly, we have the classic Ditto looper, which...well, it loops. While the functionality of this pedal may not need a detailed description, it is worth noting that looper pedals can significantly expand possibilities of any setup, effectively presenting an opportunity to build up a whole performance (planned, improvised, or both) by layering, and removing parts moment by moment as one creatively wishes.

Part of working with electronic musical instruments is embracing the idea of automation, and delegating elements of the performance to electronics, sometimes to an extreme point where a simple input generates an unbelievably complex outcome. The interaction between the input source and the output presents a wealth of variability, as the same device can respond very differently depending on what is fed into it. Every musician dealing with electronic music gear learns how to maintain the right balance by adjusting their performance on a dedicated instrument to suit the given processor for the best results. That is precisely what Katrina came to share with us—using the right vocal techniques when working with effects pedals.

Using harmonizing pedals like Meris Hedra can be particularly challenging as minor differences in tone and pitch can significantly affect the final output. Katrina proposes a solution where modifying the vowels depending on the harmonizer settings can be a remarkable improvement on the output.

For example, when you are harmonizing above the root note it is wiser to select darker vowels like 'oh' and 'uh'. This helps in balancing the tone, and making the pitch-shifted output sound more ethereal, and less comical. On the contrary, when you are harmonizing below your voice, and maybe even using some additional tone-darkening effects, all you need to do is use a brighter vowel like 'ee'. Alternatively, if you do prefer a darker vowel, Katrina suggests smiling while singing it, as this will greatly help in removing the muddiness that may often accompany darker tones.

Powerful harmonizers like Hedra are often equipped with pitch correction capabilities to compensate for pitch drifts. When engaged, the harmonized notes are snapped to the nearest pitches in a selected scale, which can be incredibly useful in some situations, and pernicious in others, especially when you use techniques like vibrato and glissando. Hedra has three pitch correction settings to choose from. Strict pitch correction is the most drastic one. It causes a very rigid stepped transition between pitches. Loose correction still retunes the "wrong" notes, while allowing for effects like vibrato to pass through, causing an almost shimmering effect. Turning pitch correction off lets the notes glide freely from one another following your performance precisely.

Another important thing to consider when using harmonizer-type effects pedals is the use of consonants can have a significant effect on the response of the pedal. This is chiefly important in situations when you are using strict pitch correction, as soft and less-defined beginnings of phrases can cause an erratic response from the pitch shifter, and starting your phrases with consonants can be an easy fix. Katrina suggests using the 'd' consonant, as it is softer and gentler than other options like 't' and 'p'. Alternatively, if you are firmly set on using a soft vowel instead of a consonant, the singer suggests using what's called a "glottal attack," which is essentially a technique for producing a sound by the sudden explosive release of breath, forming a strongly emphasized percussive attack.

With all of the above said, Katrina repeatedly underlines that there is a lot of room for variation in those techniques, and much depends on your desired outcome. You should certainly experiment to find the approaches that work best for you.

Observing the evolution of music technology, it is interesting to see how certain gear development gravitates to service and enhance a particular instrument or group of instruments, leaving others somewhat unattended. Well, there are surely reasons for this, and a lot can be left up for speculation, but we'll just point out that aside from a few examples, live vocal processing remains an open field with much to be discovered. Surely, you can use processors designed for other instruments, but there is always a chance that some of the desired behavior will be dismissed. In fact, when asked about the challenges of using effects pedals for vocals, Katrina indicated that the first hurdle is simply connecting a microphone to the pedalboard.

Using the opportunity, we've asked Katrina what her dream vocal processor would look like. The artist described a machine that would include a harmonizer with no less than three pitch shifters, very much like the Hedra, but with an additional octave switch. It would also have a varied selection of reverbs, and a ducking delay, which would only delay the last phrase sung. Format-wise, the processor Katrina envisions would be attached to a microphone stand with clearly laid out function names—a feature that is very useful in dark venues.

Although the selection of effects that the artist proposed for her dream vocal machine is very modest, it is clear that the subtleties matter—as each instrument is different. We surely hope more music gear manufacturers venture into designing dedicated vocal processors in the future, and we can't wait to find out what the future of vocal processing holds.

The PC Staff Brings Some of Bandcamp's Finest to Your Attention

An Interview With Knobs (Scott Harper)

From Pedals to Modules and Beyond

Turning Reverbs into Instruments with Feedback

Breaking Down the Examples in Our Reverb Feedback Video