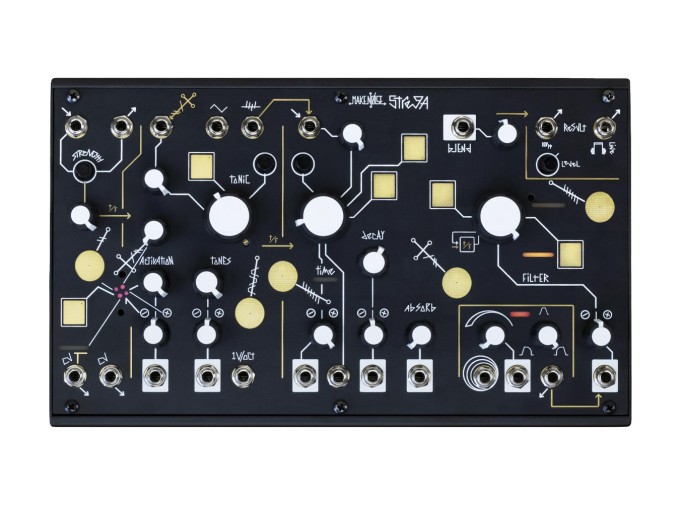 A crucible of raw sonic material with a twist of mutable time, Make Noise's Strega is a chaotic semi-modular synthesizer experiment developed in collaboration with Alessandro Cortini. With a sound that evokes recordings like FORSE, AVANTI, VOLUME MASSIMO, and others, Strega is an experimental synthesis cauldron where filtering, oscillation, and time combine into an ever-evolving, swirling flux of massive, encompassing drones, distorted feedback, murky memories of the musical past, and delicate, distant tones shrouded in a mist of tape-like hiss.

In objective terms, Strega is a standalone, semi-modular synthesizer with the same form factor as the 0-Coast and 0-CTRL. Unlike these instruments, though, Strega does not explicitly borrow inspiration from the techniques of West Coast synthesis. Instead, it surfaces a darker, wilder, and noisier sound, and presents a workflow that encourages experimentation and rewards careful listening and intentional sonic manipulation. It can function as a standalone drone machine, a synth voice to pair with your 0-CTRL, or even as a processor for external signals.

"Strega," Italian for "witch," focuses on the raw building blocks of synthesis as ingredients in an alchemical experiment, turning standard synthesis structures like delays and oscillators into Activation Sources, Time / Filter Experiments, and mysterious symbols representing a hidden source of interference and chaos. Strega is comprised of four primary sections: a section for handling external input, an internal sound generator, an Agitation Generator, and the Time / Filter Experiment.

The left section includes a preamp, envelope follower, and audio send level control for integrating external sounds into the alchemical experiment. The internal signal generator features controls for Activation, Tones, and Frequency, complete with the opportunity for the hidden Interference generator to destabilize the Frequency and Activation levels. With a wide range of tones from warm, triangle-like warbles to heavy, multi-octave buzzing drones, this signal generator is the core source of excitation for the bulk of Strega's structure: the Time / Filter experiment.

The Time / Filter Experiment is a peculiar cauldron of sonic transformation, where the internal sound generator and external inputs go to be mangled into new forms. The results of the experiment can range from murky filtered delays to metallic clangs, wow and flutter, and high-end textural hiss. However, this circuit isn't simply a filter and delay—at slower time values, the Time / Filter experiment introduces its own peculiar tones. With mysterious chirps, buzzes, and vague echoes of the past bubbling up from the hazy, noisy void, this section provides a wide range of ways to interact with Strega's mysterious internal logic. A dedicated Agitation Generator provides LFO / envelope-like modulation, allowing the nature of the Time / Filter Experiment to gradually change course, break apart, and re-convene.

Strega's surface is covered in mysterious pictographs and touch plates—all indicating potential paths between its many internal resources. Several internal connections are normalled to specific destinations through front-panel attenuators and attenuverters, and other connections can be achieved through patching...however, the many front-panel touch plates act as a means of momentarily patching and combining signals using your body as a crucible, commingling your material existence with the electrons that flow through Strega's veins. Many of these touch plates surface internal hidden signals otherwise not directly accessible from Strega's more conventional modular connections, leading you to a playing experience that combines normalled internal signal paths with modular interconnectivity and the fleeting, organic use of your own body as a patch bay. With these multiple strata of signal flow operating simultaneously, the sonic experiment takes many unexpected twists and turns, always offering a new way to interact and change course.

With Strega, Make Noise presents familiar synthesis concepts in a novel light, bringing us a synthesizer with an unconventional voice structure that begs you to experiment. By recontextualizing the function of basic synthesizer building blocks, you can begin to discover sounds you'd otherwise never find—and through a rather large amount of hidden magic, each of these sections constantly bring their own individual tendencies to the surface, nudging you in new directions. Though it may appear wild at first, Strega can certainly be tamed: everything from clean, stable tones to outlandish abrasive noise is equally represented and equally accessible, making it a colorful addition regardless your musical style. Add an external controller for access to stable melodies and bass lines, or use it entirely standalone for deep drones and explorations into animated sonic textures. Or of course, you can use it as an auxiliary voice/processor for your modular system: all options are equally viable.

Aside from many of its obviously Cortini-esque tones (expansive drones and tape hiss aplenty), though, perhaps the most important thing Strega borrows from Cortini is a keenly developed sense of the deep relationship that can form between an instrument and a performer. By surfacing just the right amount of chaotic behavior, colorful noise, and unexpected interferences, Strega constantly nudges you toward a musical conversation—one which will no doubt reward you with endless hours of peaceful, distant melodies, shrieking feedback, vast, dynamic drones, and a swirling world of sound twisting into territory completely unexpected.

Related ArticlesAudio-Controlled SynthesisConverting Audio to MIDI + CVArtist Picks: Best Gear of 2021 - Part 1Best Synths, Effects, & Controllers with Andrew Huang, Benn Jordan, and MoreArtist Picks: Best Gear of 2021 - Part 2Best Synths of the Year with Red Means Recording, Knobs, & MoreTony Rolando: Breakin' is a MemoryMake Noise Founder on New Album + Creative ProcessFashion Club Live Showroom PerformancePerforming Tracks from New Record ScrutinyPlaying Synthesizers With Your EyesAn Interview with Ivana DamaMake Noise StregaAlchemical Experiment & Cortini CollaborationMeet Moog's MAVISAn Affordable (and Excellent) Desktop Semi-Modular SynthesizerPWM Malevolent Review: the Sinister Semi-Modular SynthA Brutal New Release from PWM + Future Sound SystemsBuying Guide: Semi-Modular SynthesizersOur Favorites from Moog, Make Noise, Bastl, Arturia, and MoreStaff Picks: Best Synths + Modular GearOur Favorite New Gear in 2021What is CV/Gate?Control Voltage and Gate Signals Explained
Product Demo Videos
Make Noise Strega - We Shocked Ourselves With It!
Wes and Jacob explore a few patches with the Make Noise Strega, combining it with the other Make Noise semi-modular gear (0-Coast & 0-CTRL) as well as a four track tape loop and some pocket operators. The Strega was designed by Alessandro Cortini and Make Noise and features a synth voice, noisy delay and a ring modulator, since everything is semi modular and signals can be routed with patch cables and touch-points there are lots of patching options with the Strega.
The Secret to Semi-Modular Setups with the Patch Pals
Patch Pals Jacob and Wes go over some different semi-modular setups and the concepts behind using different pieces of gear and even different formats in a "modular ecosystem."

They take a look at their favorites including the Herbs & Stones Liquid Foam, Moog DFAM, Buchla 208c, Make Noise Strega, as well as few effect pedals and more!

This incredible project explores the idea of playing musical instruments with your eyes using a DIY webcam apparatus in combination with a Max patch.