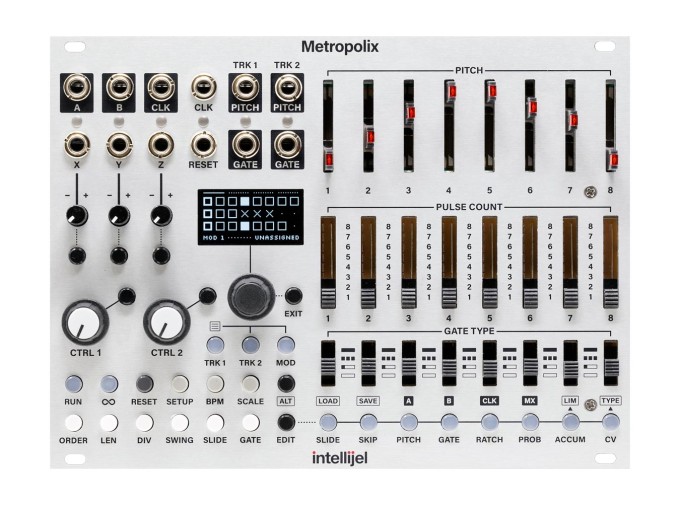 Bustling with activity in the center of your Eurorack system, Metropolix is the next realization of Intellijel's hit Metropolis sequencer. At first glance, Metropolix looks much like its predecessor, offering the same general user interface of sliders and switches to set pitches, step duration, and gate type. And while the workflow is indeed familiar to users of the Metropolis, its capabilities have been wildly expanded to bring more variation to your eight stage sequences than ever before.

One of the biggest updates to the Metropolix is that it offers two separate pitch and gate outputs, corresponding to two tracks each derived from the main set of sliders and switches. The unique settings of each track are determined by the white buttons in the bottom left, providing independent playback order, length of the sequence, division of the clock rate, and settings for swing, slide, and gate length. Diving deeper into the Track menus will reveal further capabilities, such as pitch transposition, note ranges, and more to give each track some further distinction from its counterpart. Metropolix also supports several parameters that can be assigned on a per-stage basis, allowing for things like ratcheting, probability, and other ways to inject new twists on your musical ideas.

The two sequencer tracks in themselves are a substantial update to the Metropolis, but Intellijel didn't stop there. Metropolix contains eight internal Modulation lanes, which each offer eight stages of stored values and can be routed to the assignable A or B outputs, or a plethora of internal parameters for powerful modulations in the box. Like the main pitch and gate sequences, these Mod lanes can have their own individual playback order, length, and clock division rate. For external modulations, three Aux inputs with attenuverters can be assigned freely, and two Ctrl knobs are available for hands-on control of assigned parameters at the twist of a knob (or two).

While Metropolix will remember its current state on power down, plenty of presets may be stored as well. The eight banks of eight presets can provide 64 states of stored menu settings without overwriting the current pitch slider and gate switch settings, allowing for powerful change at in instance without being musically jarring in a live setting. Of course, this can be changed to a full recall of all settings if your uses for the Metropolix primarily reside in the studio.

Intellijel's original vision for a performable sequencer remains fully intact in Metropolix, providing the most valuable parameters to the user at an instant press of a button, switch, or slider, but rewards those brave enough to explore its menus. At its most basic, Metropolix is a flexible way to create quick sequences with musical interest, but dive into the deeper settings and the sprawl of Metropolix will grow and spread its influence over your modular.