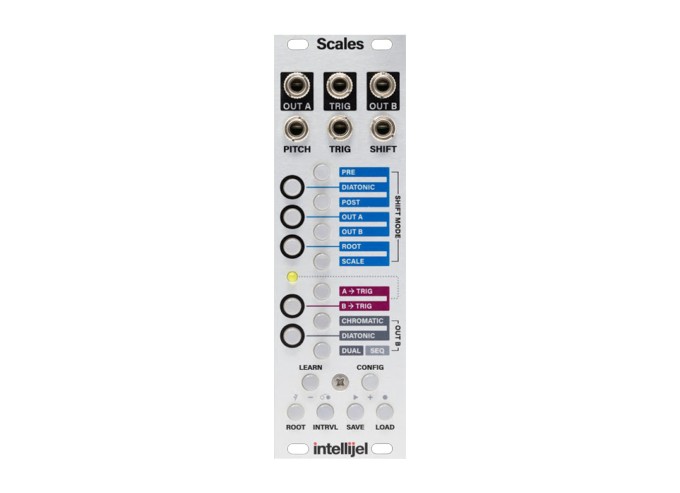 Scales from Intellijel is a dual-channel quantizer module for eurorack modular synthesizers. It accepts an input voltage and quantizes it to notational information within a user-defined scale. Use it as a pitch source for an oscillator or any other module that accepts note values.

But Scales isn’t just another basic quantizer—no, Scales is equipped with the ability to mobilize LFOs, random voltages, and unquantized cv into harmonious spectral content. In addition to the ability to lock quantization to a particular trigger, Scales also boasts a few trigger outputs: no triggering, output-sync’d triggers, and a trigger/gate synchronized to an incoming trigger.

Scales also features a shift input, which corresponds to two outputs for the creation of shifting harmonic intervals. The shift input itself allows the user to modulate changes solely on output A, output B, or both. This input can also switch between scales, alter the root of an existing scale, or split scales into two quantizers.

Thought that was it? Think again. Scales is outfitted with a 128-step sequencer (SH-101 style) that gives users the ability to route sequenced notes and patterns to one output while sending pitch quantization via another.