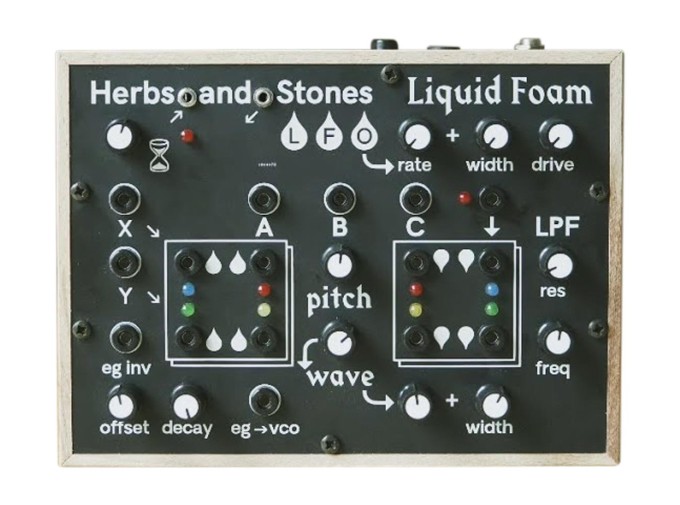 Liquid Foam from Herbs and Stones is a modular groove box, but a far cry from the typical drum machines you may be familiar with. All the inputs and outputs send and receive gate signals, with no continuous CV signals present. The dual sequencer design is not a traditional step sequencer but a pair of gate sequencers with patterns determined by the relationships between the different parts of the device. The master clock provides timing for the two sequencers. Sequencer A features two inputs that seed new data into the sequencer. Sequencer B, on the other hand, gets its sequencer data from the LFO. The relationship between the clock speed, LFO speed, and LFO pulse width determines the sequencer B outputs. Each sequencer features four gate outputs, and the sequencer linearly moves gate information through the different stages based on the clock speed.

A trio of gate inputs, ABC, determines the pitch of the VCO. Each input is weighted differently and, therefore changes the pitch by different amounts. The VCO outputs three waveforms: triangle, sawtooth, and pulse with adjustable pulse width. The two-stage wave mixer first blends between the triangle and sawtooth waveforms, and then goes into to the second wave mixer where it mixes with the pulse waveform. This passes into a resonant 12dB/oct low pass filter whose pitch is influenced by the envelope. The filter is squelchy and reminiscent of a 303 filter. Finally, the signal passes into a CMOS-based overdrive circuit that adds warmth and additional texture.

Related ArticlesGentle Jams on the Gentle WhamAn Analog Drum Synthesizer from Herbs and StonesTrailblazing with Herbs & Stones PathwaysA Matrix Mixer as a Path to Self-DiscoveryStaff Picks: Best Synths + Modular GearOur Favorite New Gear in 2021
Product Demo Videos
The Secret to Semi-Modular Setups with the Patch Pals
Patch Pals Jacob and Wes go over some different semi-modular setups and the concepts behind using different pieces of gear and even different formats in a "modular ecosystem."

They take a look at their favorites including the Herbs & Stones Liquid Foam, Moog DFAM, Buchla 208c, Make Noise Strega, as well as few effect pedals and more!