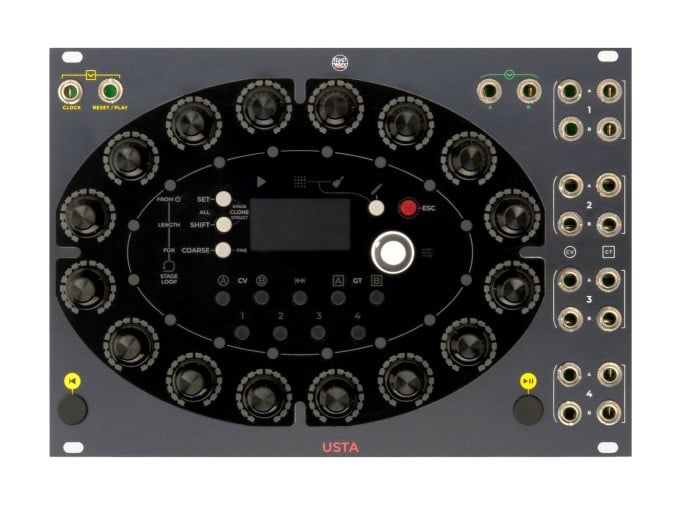 The Frap Tools USTA is an easily approachable sequencer with formidable capabilities, making it easy to create and recall evolving polyrhythmic sequences, multitrack counterpoints, and entire compositions worth of material. Providing an elliptical encoder interface reminiscent of the Buchla 250e Arbitrary Function Generator, USTA brings a breath of fresh air to sequence-based composition—providing plenty of visual feedback and a workflow that makes creating even the most complex compositions fun and fast.

Following in the footsteps of Sapel, Fumana, and Falistri, the USTA brings a Buchla-like workflow to Eurorack format, with plenty of extra twists and turns. USTA provides up to eight simultaneous CVs and eight simultaneous gates, organized into four tracks of four parts each. Each of a sequence's up to sixteen stages can be set to a different length, based on multiples or divisions of the master clock rate—enabling the creation of an endless variety of time signatures and polyrhythms. As Frap Tools says, it is capable of everything from "fine Baroque polyphony" to "extreme polyrhythmic noise"...and they're entirely right.

USTA provides plenty of options for pseudo-pattern chaining, allowing for repeatable live performances and the creation of entire tracks. It also offers myriad means of automatic voltage and timing variation, slides, skips, ratcheting, CV Pitch/Gate/Stage Shift, and much more than we can address in a short description—but suffice to say, Frap Tools have created one of the most flexible hardware sequencers of all time, easily capable of everything from traditional harmonic interplay to barrages of unrelenting complex meter, from simple melody to elaborate counterpoint, from pure repeatability to outright unpredictable patterns, and far beyond.