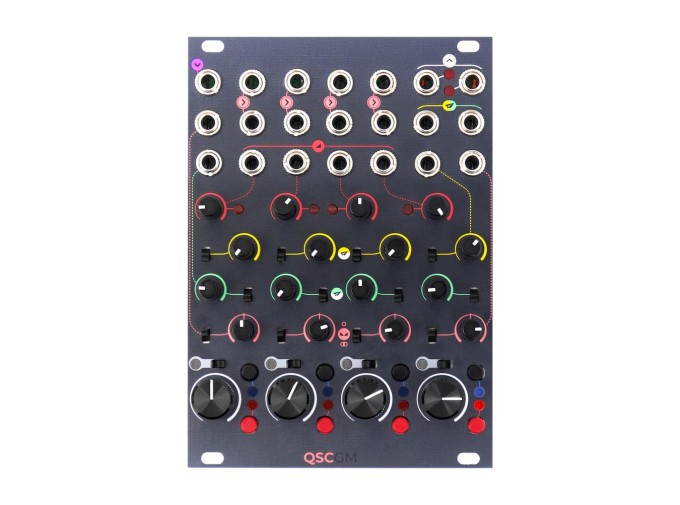 Based on prior entries in Frap Tools's Creative Mixer series, the QSC (Quad Stereo Channel) is a compact and fully-featured mixing solution for Eurorack modular synthesizers. With four stereo channels and a set of features typically found only in pro audio mixers, the QSC is a great addition to practically any Eurorack system—and can even be used to extend an existing Frap Tools Creative Mixer setup.

Each channel of the QSC features two inputs. The top input is normalled to the bottom, enabling mono-to stereo upmixing or true stereo operation. From there, each channel also features built-in input VCA control with dedicated CV attenuators, two Aux sends, panning functionality, and a channel output level control. The aux sends can operate in Pre-Fade or Post-Fade modes for flexible control of signal routing, and two sends feature CV control for send level, making for dynamic signal routing. The panners can be used in true panning mode or in crossfade mode, allowing you to continuously fade between the channel's two inputs. Each channel is rounded out with a host of solo/mute functions great for both utility use and live performance.

The QSC can, of course, join into the larger Frap Tools CGM ecosystem—or, given its local stereo outputs, can act as a stereo mixer in any Eurorack system. If you're looking for a high-class way to add flexible mixing utilities to your system while maintaining pro audio-quality sound, the QSC might just be the next addition to your case.