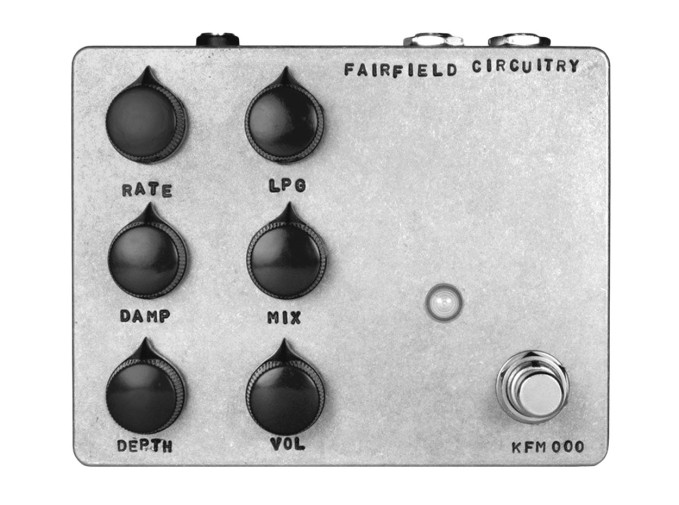 Fairfield Circuitry presents the Shallow Water, a unique effect pedal inspired by simulation mathematics (traditionally referred to as K-Field Math). Don't know what K-Field Math is? That's okay, we don't really know either...but what we do know is that Shallow Water is one of the most interesting lo-fi pedals out there. It's like something between a warbly random vibrato/chaotic chorus that instantly evokes the sound of a VHS that—let's face it—you might have left in the car for a little too long. Sorry, Blockbuster.

The concept behing Shallow Water pertains to an undefined, non-linear, two-dimensional field where past and future converge and coincide simultaneously. Shallow Water replicates this interaction with a delay chip that is modulated by a pseudorandom signal. Using the Rate, Depth, and Damp controls, you can control just how long the internal BBD lags behind the present moment—creating a highly musical sonic push and pull. This effect can range from smooth, subtle wow/flutter-style tones to drastic, sudden glitches/jerks...and everything in between sounds just rad.

Shallow Water also features an LPG, or Low Pass Gate—a circuit most commonly found in (fairly esoteric) synthesizers, which simultaneously affects the loudness and brightness of the wet sound...sort of like a gentle filter and volume control rolled into one. The LPG's level is modulated by the loudness of your incoming signal (with envelope intensity/range adjusted by the LPG knob), getting brighter the louder your sound is. It's like a typical envelope filter, but much more subdued/dark/lo-fi. Again, it's rad.

There's nothing else out there that's quite like Shallow Water, but, suffice to say, if you need a unique way of getting warbly, lo-fi, dark, distant, and downright nostalgic tones from your guitars, synths, or other instruments, it's one of the best things out there.