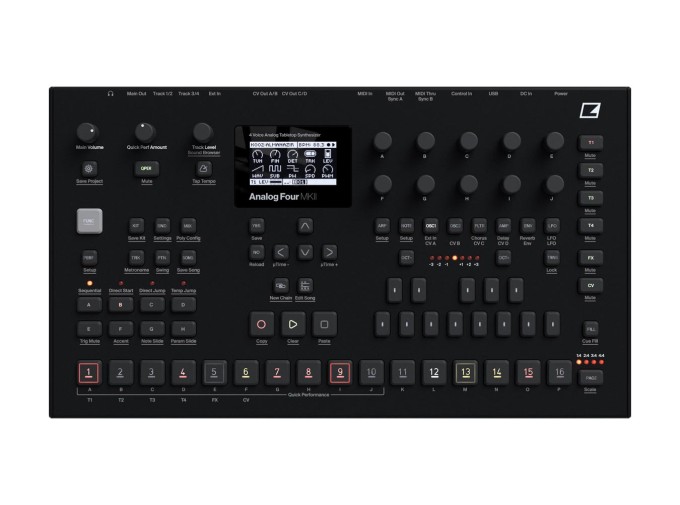 Broad sound design potential, incredible sequencing power, and flexible control capabilities—all of this and more make Elektron's Analog Four MKII one of the most versatile analog synthesizers ever conceived. Alone, it's deceivingly capable of covering most musical tasks with ease, but it can very easily serve as a centerpiece for other grooveboxes, drum machines, or modular systems. Alternatively, forget the sequencer entirely and plug in your favorite MIDI keyboard, and the Analog Four can flex its sonic muscles as a capable four-voice polyphonic or multitimbral synthesizer. And with a DAW, the Analog Four's USB class-compliant functionality makes it a capable interface in a pinch, while Elektron's Overbridge software opens the door for intuitive patch editing and easy multitracking.

At its core, the Analog Four isn't all that different from a regular analog synthesizer—except for the fact that it is wildly flexible, and can be configured to behave like a polysynth, multi-timbral synth, or anything in between. From its oscillators through its filters and on to the VCAs, the Analog Four maintains a fully-analog signal path from start to finish, complemented by digital pitch control, noise generators, envelope generators, and LFOs, with digital effects running in parallel. But don't view the digital control as a negative—it's the glue that binds everything together so neatly, and without it, the Analog Four would not be nearly as capable as it is.

The two oscillators found on each track are independently configurable, including tuning, waveform, and pulse-width modulation (PWM). Unique to the Analog Four is its ability to apply PWM to any of its waveforms, as well as the fact that each oscillator has its own sub-oscillator. Thicken up any sound with subs one or two octaves below the main oscillator, or activate the special 5th tuning option to unlock "chords" on a single track. The oscillators are complemented by a digital noise source and a wealth of AM and sync options, where you're sure to uncover some wacky sounds unlike any other analog synth you've heard before.

An analog synth is nothing without a good filter, and the Analog Four delivers with not one, but two! At the front is a juicy lowpass ladder filter that provides iconic punch and resonance, with the following multi-mode design serving as a flexible shaping tool for carving away or enhancing any element of your sound. This second filter provides seven different filter types, including various flavors of highpass, lowpass, bandpass, bandstop, and peak filtering. The first filter also provides two flavors of distortion available under a bipolar overdrive control: post-filter hard clipping in one direction, and internal soft-clipping in the other.

There's no shortage of ways to shape sounds on the Analog Four, even without touching the sequencer. The VCA contains its own dedicated amplitude envelope, while the filter envelope and a secondary envelope may each be assigned to two different sources. Likewise, the LFOs can be routed to a number of different places, with their rate optionally syncable to the current BPM or derived from oscillator 1's frequency. If these options aren't enough, you'll likely stumble upon other simplified modulation sources as you explore the Analog Four's sound architecture, including fade controls on the LFOs, convenient PWM LFOs, and more.

Sound capabilities aside, the other vital component of an Elektron device is its sequencer, and the Analog Four doesn't disappoint on this front. All of the hallmarks of the Elektron workflow are here: parameter locks that modify settings on a per-step basis, conditional trigs that activate events with certain probabilities or repeats of the pattern, and micro-timing to subtly shift notes on or off the timing grid. More advanced techniques like changing sounds on specific steps, sliding between notes and parameters, as well as pattern chains and songs allow you to string together sequences into full-fledged compositions. There's also an arpeggiator on each track, and combining it with the sequencer unlocks even more ways to generate and manipulate notes.

But there's more to the sequencer than just notes and sounds inside the Analog Four. Both the FX and CV tracks are open to sequencer control, too, meaning that Analog Four is a great brain for a modular system as well as crafting highly unusual chorus, delay, and reverb effects that can change on a dime. The CV track and its four dedicated outputs are highly configurable, supporting even the most unusual legacy gear out there. But for more modern pieces, you can also sequence and clock gear from the MIDI output, which can also be configured as DIN Sync ports for classic drum machines.

With its depth and flexibility, the Analog Four MkII might be intimidating, but it's able to highly personalized to your personal needs. Enable polyphony for more traditional usage with your favorite MIDI keyboard, or activate Multimap to play different sounds on specific notes. Use the external inputs to process other instruments with the filters and effects. Plug into your computer and launch Overbridge for immediate multi-track recording and sound management as if the A4 were a software plugin instrument. Seriously—there are countless ways to use the Analog Four, and Elektron has gone to great lengths to make it capable of covering all sorts of musical ground. Simply put, the Analog Four is an instrument that can join you along any possible musical journey, and you'll be pleasantly surprised that it continues to hold its own along the way.