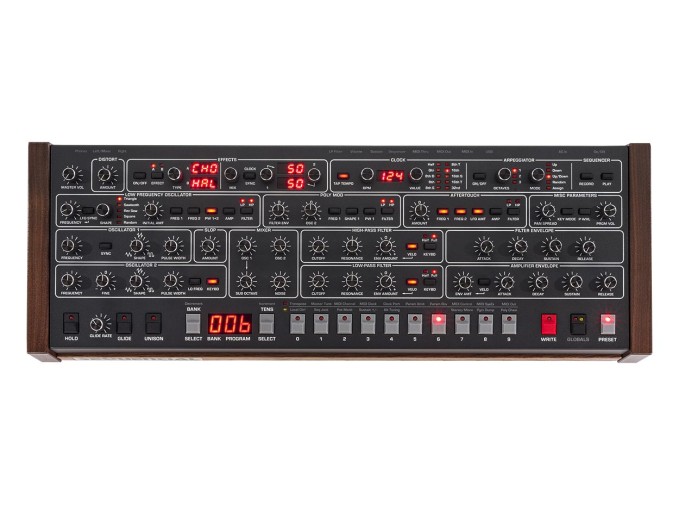 The Prophet 6 desktop module is just as powerful and expressive as its keyboard-toting sibling. In many ways, it offers even more possibilities in a modular context: its front panel controls offer the same immediacy and ease-of-use, but one is free to add the keyboard of their choice.

The Prophet 6 utilizes the best features of the Prophet 5 as a point of departure to bring synthesists something much more than a revised classic. The synthesizer’s redesigned all-analog core and advanced digital effects serve to make it both functional and flexible in for both the studio and the stage while maintaining the Prophet’s coveted warmth and punchiness.

Part of what makes the Prophet 6 great are its dual analog VCOs per voice, each complete with a triangle core sub oscillator for a total of 12 VCOs. Each VCO has a continuously variable waveshape, while each voice features 2 discreet four-pole filters inspired by the Prophet 5. When combined with the unit’s enhanced Poly-Mod section, an upgraded version of the Prophet 5’s with some ingenious enhancements, the Prophet 6’s capabilities as a modulation powerhouse become clear.

The module’s digital effect section features several staple 24-bit, 48kHz resolution stereo effects (delays, reverbs, chorus, and a phase shifter). For those craving something without any digital character, the effects section can also be bypassed to exploit the Prophet 6’s all-analog signal path to the fullest extent. And if you’re craving analog effects, there’s the possibility of routing the signal through the Prophet 6’s 100% analog stereo distortion.

The desktop module also contains the same sequencer and arpeggiator as the keyboard version. The sequencer is 64 steps with 6 notes per step, while the arpeggiator contains several user-adjustable modes such as up, down, and random. Like the keyboard version, both the sequencer and arpeggiator can be synced to an external MIDI clock for added convenience. Additionally, while the Prophet 6 is monotimbral, its effective pitch transposition feature makes it easy to keep things interesting.