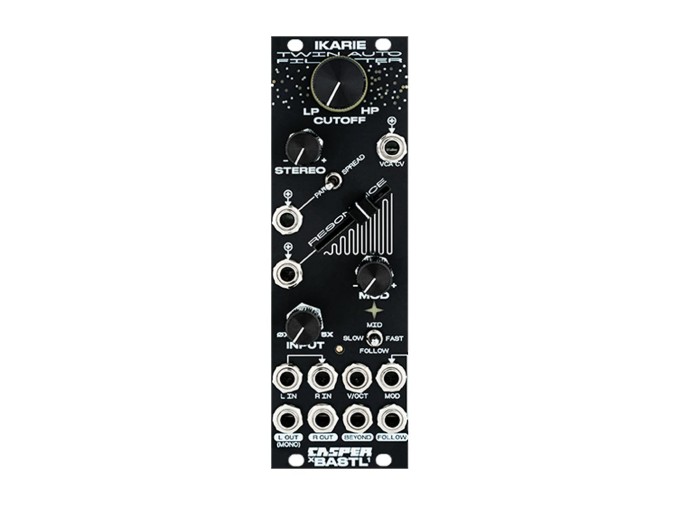 The next collaboration between Bastl and Casper Electronics has landed, and the Ikarie Stereo Filter is ready for spacey resonances and interstellar spatial modulation. Rather than offering discrete outputs for lowpass and highpass like most state-variable filter designs, Ikarie will continuously morph between the two, and depending on how it is patched, an array of resonant bandpass or stereo notch filtering will be heard.

When used as a stereo filter, each side utilizes a 12dB/oct slope, but it can also be used in mono as a dual peak, four-pole filter. A Stereo control and input for CV control is present for a wide range of spatialization options, assignable to filter cutoff spread and panning. For additional sculpting potential, Bastl and Casper have included a unique output named Beyond, which outputs the spectral differences between both filters for a twin peak filter response (as in Rob Hordijk's infamous Blippoo Box). Ikarie contains both an internal VCA and an envelope follower, and the input signal can be overdriven up to 5x gain, packing a ton of functionality within a single module.

Perfect for envelope filter effects, binaural spatialization, squelchy distortion, resonant pings, and stereo self-oscillation, Ikarie is like an outright mean-sounding Hordijk filter, or a blatantly acidic stereo spatializer. Whether you're using it for straight-ahead filtering or any of the countless other tricks hiding beneath its surface, we hope you're ready to blast off on new audio voyages with the Ikarie from Bastl and Casper.

Filter sweeps are an iconic sound in electronic music, and they come in tons of variations and different styles, Check out Signal for the full article with all the hot details!

Our Friends' Favorite Filters Ft. Electronisounds Audio, Moffenzeef Modular's Ross, and Coma Tek
We love hearing about our friends favorite things, so we got a few of our pals to tell us all about their favorite filters in this weeks video ! ⁠
BASTL Instruments Ikarie Stereo Filter Reviews
Register with :