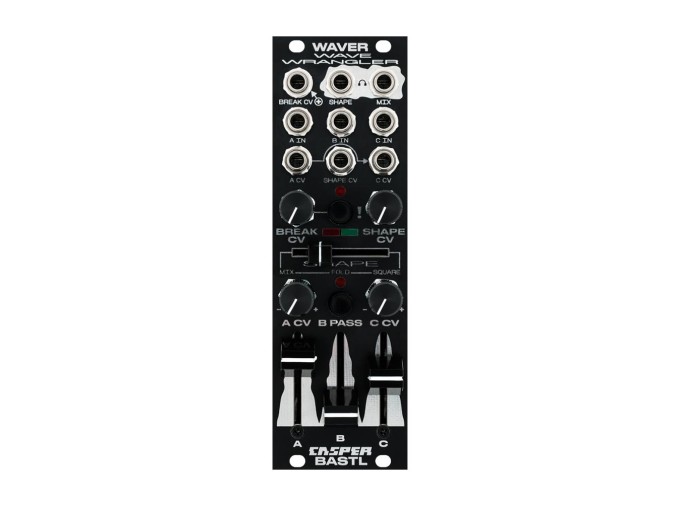 The Casper Electronics/BASTL Instruments Waver is a wave folding mixer and signal disruptor that is great for experimental mixing and rich, complex tones. There are three inputs with faders for mixing—each DC coupled so as to allow mixing of both audio and CV signals.

Channels A and C feature bipolar, thru-zero VCAs with attenuverting CV control, which allow you to invert the input signals. The channel A CV input is normalized into the channel C CV jack, and crossfading can be achieved with one modulation source by inverting one CV level from the other. The VCA can also act as a ring modulator when using audio rate signals.

The mixed signals are then passed into the shaper section. The shaper adds wave folding and square shaping. The wave folder folds the waves over upon themselves when they pass above a threshold level, which adds break points which impart rich higher harmonics. The wave folded output is routed to the square shaper which converts the waveform into a three-step squared waveform. This adds a great deal of character and grit to the signal, squaring it up and adding more harmonics.

The break section has two modes, clipping and feedback, which are applied pre-mixer. Clipping will add DC offset to the mix pre-shaper, offsetting more of the signal into the wavefolder's threshold. The feedback mode, activated using the ! button, routes the output of the square shaper back into the input of the break, creating a feedback loop. The Waver outputs both a shaped output and a pre-shaped mix output, which Casper Electronics recommends using for additional feedback loops by patching back into any of the unused inputs.

In this video, the WMD Crater, Intellijel Plonk, and Mutable Instruments Plaits are combined through the Waver. The Waver's impact ranges from warm coloration to explosive wavefolded blasts and biting high end—making for something with considerably greater sonic depth than the average mixer. A Tiptop Echoz rounds out the signal chain, while a Winter Modular Eloquencer and Intellijel Quadrax provide finely-tuned sequencing and control.