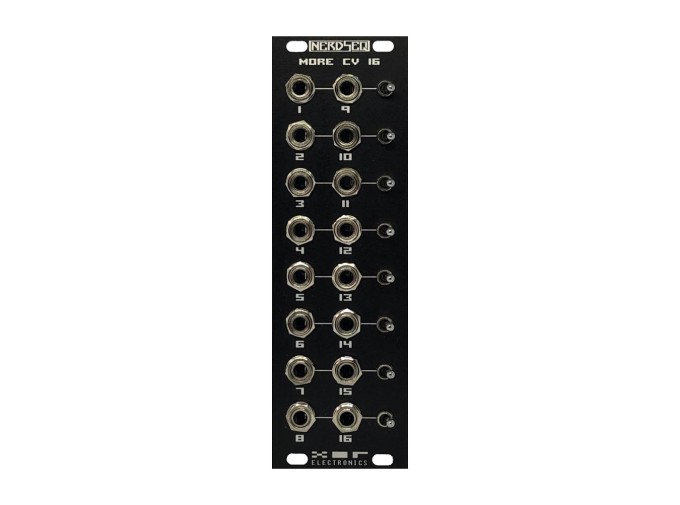 The XOR Electronics NerdSeq CV16 expander adds 16 additional CV outputs to the NerdSeq. These can be notes, pitches, eight LFOs, or eight envelopes.

The range of the outputs is 10V, either 0-+10V or -5V-+5V. It includes a digital glide with variable speed and resolution of change that can be added to the notes or pitches. The envelopes can be any combination of ASR, AR, AS, or release only and can loop. The time range of the attack and release go from 20ms to approximately 14 minutes. The sustain voltage can be set anywhere from 0-10V in 255 steps.

The LFOs have three settings: speed, amplitude, and waveform. They have seven waveforms including, sinus, triangle, sawtooth, ramp, square, noise, and random. Random will randomly select between the different LFO waveforms, creating complex and unpredictable LFO shapes. The range of frequencies is between 0.0011Hz (about 14 minutes) up to 21.8Hz, just barely into the audio range. The modulators can be added to the note outputs, allowing for pitch envelopes and vibrato. One modulation source can be routed to multiple outputs. The CV16 Expander adds a new realm of sequencing possibilities to the NERDSEQ, adding additional sequencing and modulation lanes to this already robust sequencer.