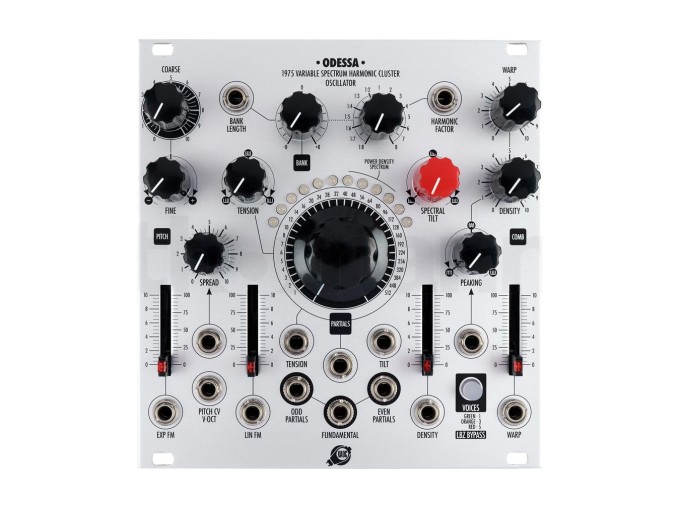 The XAOC Devices Odessa is their much-anticipated oscillator which employs an FPGA-based hardware additive synthesis engine to provide access to all sorts of tones from ethereal drones to glitchy swarms and clusters. Capable of producing up to 512 sine wave partials (and up to five detunable voices), Odessa is an entirely unique offering with a clever parameterization which makes handling its immense sonic resources easy and inspiring.

Odessa's heart is its ability to produce a huge number of simultaneous sine waves, from 1 to 512. Using the front-and-center Partials knob and CV input, users can define just how dense the harmonic content is, enabling effects not unlike those possible through filtering. The Power Density Spectrum LED display provides visual feedback for the sound's current harmonic structure, making it easy to visualize the state of your sound in the manner of a spectral analyzer. The Bank and Harmonic Factor controls allow for extended groupings and controls of the overtones.

The Tension parameter is a macro control for the harmonic relationship between partials. With Tension at 12:00, the generated partials follow the harmonic series—turning to the left or right alters the tuning ratio between all partials, creating inharmonic sounds that range from dense, swarming clusters to bright, metallic tones. Spectral Tilt alters the overall balance between partials, providing an effect similar to lowpass filtering...which is tremendously useful in a module in which sounds can become so bright so easily.

A built-in comb filter make additional additive-like effects accessible, producing profound results when paired with the harmonically dense content produced by the oscillators themselves. The combination of Warp, Density, and Peaking controls (each with their own dedicated CV inputs) provides access to effects such as flanging and phasing—though their abuse can lead to the creation of entirely novel sounds.

Odessa can operate with one, three, or five identical voices. And while Odessa itself does not provide any facility for polyphonic operation, it does provide the possibility for continuously variable detuning...so it is capable of enormous unison sounds, making swarms denser and leads and bass lines even more biting or lush than possible with a single voice alone.

Odessa features three dedicated audio outputs—one for the fundamental pitch, one for even-numbered overtones, and one for odd-numbered overtones. These can, of course, be used for a wide range of purposes, ranging from parallel processing to huge, disorienting stereo evolutions and spectrally-based panning. Additionally, access to both exponential and thru-zero linear FM means that endless spectra of complex tones are available, bringing to mind the sonic debauchery of bizarre instruments such as the Technos Acxel: the combination of additive synthesis and FM ranges from rich and sparkling tones to absolute sonic mayhem.

What's more, Odessa provides CV inputs for every parameter, so it can change behavior entirely at a moment's notice. Paired with a multi-channel sequencer, multiple random voltage sources, or multiple LFOs (from a Batumi, perhaps?), Odessa can become the basis of entire tracks: chaotic noise, huge drones, slippery leads, and more are all within reach. Additive synthesis is notoriously difficult to implement in hardware—but XAOC Devices have provided a layout that makes it fast and easy to traverse an enormous range of tones.