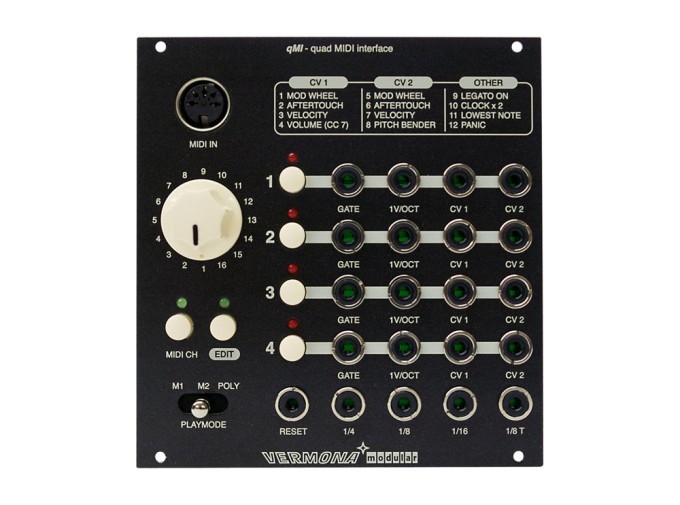 Vermona’s qMI MIDI Interface V2 arguably represents the pinnacle of MIDI to CV modules. Inspired by the voice allocation unit from Vermona’s previous PERfourMER mkII, the module affords users a means of playing their synthesizer both monophonically and polyphonically.

As its name suggests, the QMI V2 is comprised of four individual output channels, each with a single 1V/Oct output, a Gate output, and two additional CV outputs or MIDI controller signals like pitch bend or the modulation wheel. The output channels can be combined or used independently in accordance with whatever the user needs. When combined, each channel can be played in unison, monophonically (with rotating voice allocation), or polyphonically. One of the new features implemented in the V2’s design is the ability to rotate between each monophonic voice assignment by sending a Gate signal to the module’s “Gate In” jack.

Despite all its seeming complexity, the module is actually spectacularly easy to use, with a front panel interface that offers immediate access to all of its features without any menu diving.