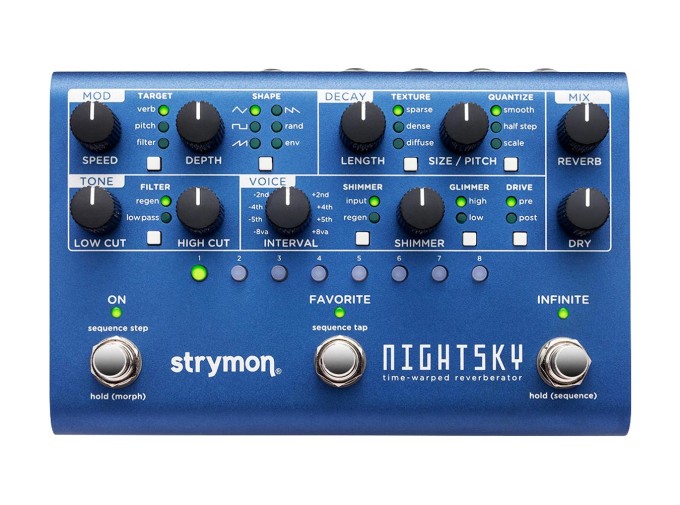 Less of a traditional reverb pedal and more of a jumping-off point for opulent sculpting of ambient textures, the Strymon Night Sky provides a uniquely different perspective for a classic effect. Strymon refers to it as a "reverberant synthesis workstation," which is a perfectly fitting description based on some of the features found in the Night Sky. From its synthesizer-like filter and modulation sections to the onboard sequencer, Night Sky starts to seem more like a full-blown instrument than just an effects processor.

Before diving into the features, it's important to understand how the core of the Night Sky affords its unique functionality. Much like how the rate of echoes heard from a tape delay is dependent upon how fast the tape is physically moving, the Night Sky employs a similar concept for audio moving through the reverb buffer, determined by the Size/Pitch knob in the Decay section of the pedal. As one might guess from the name, this single parameter affects the perceived space of the reverb, and changing this parameter while audio is reverberating will allow for pitch transpositions. It's worth mentioning that this knob is fairly independent from the Length control, which effectively behaves as a feedback control for residual reflections. Of course, the dedicated Infinite footswitch allows for the reverb to be sustained indefinitely.

Night Sky offers three distinct reverb Textures, each utilizing this unique variable-rate tank architecture. Sparse utilizes a distinct number of delay taps, so while sustained audio inputs might sound like a solid reverb, shorter bursts or percussive inputs will reveal distinct echoes. Adjustments to Size/Pitch effectively set the delay time for these echoes. Dense is rather similar to a standard plate-type algorithm, but with all the advantages offered by the other parameters found in Night Sky, while Diffuse totally smears transients into a wash, excelling at swelling ambient waves.

The magic of Night Sky's "synthesis" becomes highly apparent through the parameters found in its other sections. In the Tone section, Night Sky offers both Low and High Cut filters. Low Cut works well as a high pass filter removing rumbling low frequencies from the reverb, but High Cut offers two distinct modes. In Regen mode, the filtering of high frequencies is applied within the reverb tank, for a continually darkening reverb effect with longer decay times, while Low Pass applies a resonant synthesizer-style filter to the output. While the Tone section carves frequencies out of the reverb, Voice enhances the reverb through shimmer, resonances, and overdrive. The Shimmer effect has its own level control, and can be applied on just the incoming audio for a single level of pitch shifting, or within the regenerating reverb tank for continuous transposition, with intervals ranging from one octave down to one octave above the. Glimmer utilizes banks of resonant filters to accentuate the harmonic spectrum of incoming signals. It can be totally bypassed, or tilted to enhance higher or lower frequencies. There's also a Drive effect that can be applied before or after the reverb, allowing for overdriven and dynamic reverb saturation.

With several powerful parameters, Night Sky provides two ways of creating movement in your reverbs from the pedal itself. The Mod section allows an LFO with five waveforms or an envelope follower to be applied to one of three destinations: the reverb's internal delay lines, the Size/Pitch control, and High Cut filter's cutoff position. Holding the Infinite switch will activate the onboard step sequencer, allowing for eight step sequences to control the Size/Pitch parameter. Through the use of the Quantize button, the steps may be freely tuned to any value, or constrained to chromatic half-steps or one of eight musical scales.

Night Sky doesn't stop there, offering full MIDI implementation via 5-pin and USB connections, expression pedal input, morphing between alternate stored knob values, and several secondary parameters for shaping the reverbs even further. With Night Sky, reverb is no longer just an effect, but another expressive component of your instrument with character and presence of its own.

Create vast soundscapes with just a few notes from your instrument. Apply mind-bending pitch and harmonic manipulation to your reverb tails, with synth-like filter sweeps. Enter a world of new sounds that blow away the boundaries of what is possible with reverb. With pioneers and adventurous sonic explorers in mind we created a reverb pedal that can go where none have gone before.

NightSky is a reverberant synthesis workstation, and a powerful, hands-on experimental sound design platform. NightSky gives you real-time continuous control of reverb pitch/processing rate/core size, harmonics, and even a synth-like resonant filter with multiple modulation waveshapes, plus a step sequencer with variable glide. You haven’t heard a pedal like this before.
Turning Reverbs into HARSH Instruments with Feedback
Manipulating feedback loops is one of the most interesting ways to explore sound, and reverb is one of the most evocative effects for placing sounds in space. Thus, curious minds are certainly wondering: what happens when you use reverb effects with feedback techniques?

In this video, Jacob gives a rundown of some of his favorite ways to use reverb pedals in feedback loops, and allowing the effect to become an instrument in itself. Touching on topics like no-input mixing, adding Eurorack modules to the mix, and strange convolution, this video aims to serve as a springboard for trying out reverbs of all kinds in ways you might not expect.

Specifically, we highlight these tricks with the Red Panda Context, the Strymon Night Sky, the Gamechanger Audio Light Pedal, and the Poly Effects Beebo, but we encourage you to try these patches with any and all reverbs you might have hanging around the studio. After all, this video is all about experimentation, and these ideas are meant to be explored, expanded upon, and inviting you to embark on new sonic journeys.
Our Internet Pals’ Top 3 Reverb Pedal Picks FT : Dexba, Slowhaste, & Cyberattack
We asked some of our internet pal's what their favorite reverb effects were and got some awesome answers!
Check out each of these artist's picks for bending time and space and be sure to give their channels a follow as well !