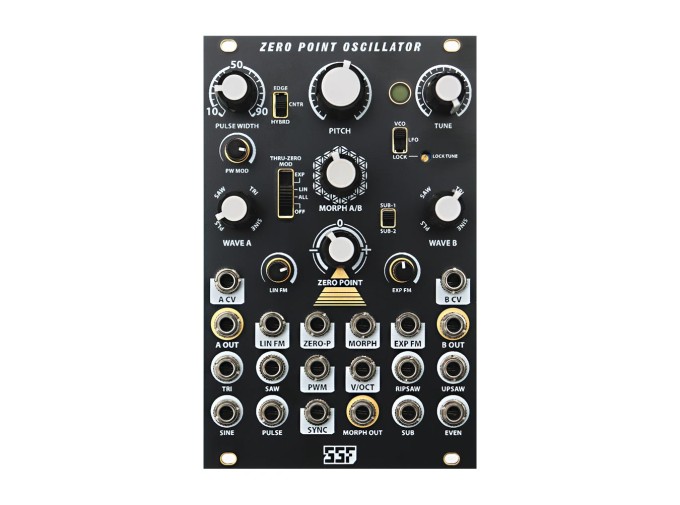 The ZPO features eight individual waveform outputs, including sine, triangle, pulse, saw, octave up saw, ripsaw, even harmonic, and sub harmonic with two octave divisions. It features three types of pulse width modulation including center, edge, and hybrid. Additionally, the ZPO offers three outputs that feature smoothly morphing waveforms. The wave A and B waveforms go from pulse, saw, triangle, to inverted sine. Hybrid waveforms can be achieved by setting the wave knob in between the different wave types. The morph control adds additional wave-shaping possibilities on the ZPO and works with the wave A and B controls. The A and B waveforms are mixed by an amount set by the morph control, resulting in new waveform possibilities. The inverted sine wave shape can be used for complex subtractive waveshapes using the morph control.

There are attenuators for both linear and exponential frequency modulation as well as the pulse width modulation. A through-zero mod switch selects if the FM is exponential, linear, all (both linear and exponential), or can be switched off altogether. The ZPO can operate in the audio range or at low frequencies, set by a switch. It uses a triangle core oscillator and is all analog. This powerful oscillator offers a wide range of tonal possibilities, a new approach to frequency modulation, and complex waveshaping possibilities.