The New Prophet-5 Rev4 and Prophet-10

In a surprising turn of events, Sequential has re-released what may be its best-loved synthesizer of all time: the Prophet-5. Additionally, they've launched a 10-voice version (appropriately named Prophet-10), realizing Dave Smith's original vision for the instrument. Matching the look and sound of the original Prophet-5, Sequential's new iteration on this classic design adds 40 years of manufacturing experience to provide a rock-solid, beautiful instrument that'll provide the sounds of the past for decades into the future.

Of course, Sequential already has a number of high-quality polysynths available: the Prophet-6, Prophet Rev2, Prophet X, and OB-6 are all favorites among a huge base of synthesists. So if you're not already familiar with the story and sound of the Prophet-5, you might be wondering—why would a pioneering company like Sequential revisit a design originally announced over 40 years ago? When they're producing cutting-edge sample based instruments like the Prophet-X and wavetable-capable mono synths like the Pro-3, why bother bringing a 1978 product back to market?

Let's take a quick look at the early history of Sequential Circuits, and we'll start to see why this move makes perfect sense, and why so many people have been waiting for this day.

The Birth of the Polysynth

Let's think about electronic instrument design in the 1970s. Synthesizers as we think of them only first came into existence in the mid/late 1960s, with modular systems by Moog, Buchla, and later, Tonus/ARP at the forefront. These manufacturers were pioneers, exploring the very idea of what an electronic instrument could be—and through business experience and their experience working with musicians, practically every company came to a similar conclusion...that they needed to produce smaller, more immediately approachable instruments.

This led to some of the most important instruments in the history of electronic music thus far: the ARP 2600, the Buchla Music Easel, and, of course, Moog's Minimoog Model D. Each of these instruments packaged the workflow and design ideology of their makers' larger modular systems into self-contained, portable, and much easier-to-use packages, and in their own ways, each was a great success. Countless musicians began to integrate synthesis into their own workflows, and as such, more and more music started to explore the novel sonic possibilities that synthesizers offered. However, most self-contained synthesizers were presented as keyboard instruments—and prior to the synthesizer, it was a natural assumption that a keyboard instrument would be polyphonic. Of course, these early instruments were all monophonic, only capable of playing one note at a time. And while many great keyboardists embraced monophonic sounds for lead and bassline roles, may musicians wanted the sonic possibilities of a synthesizer without sacrificing the polyphony. And so, instrument makers began a quest for polyphony. 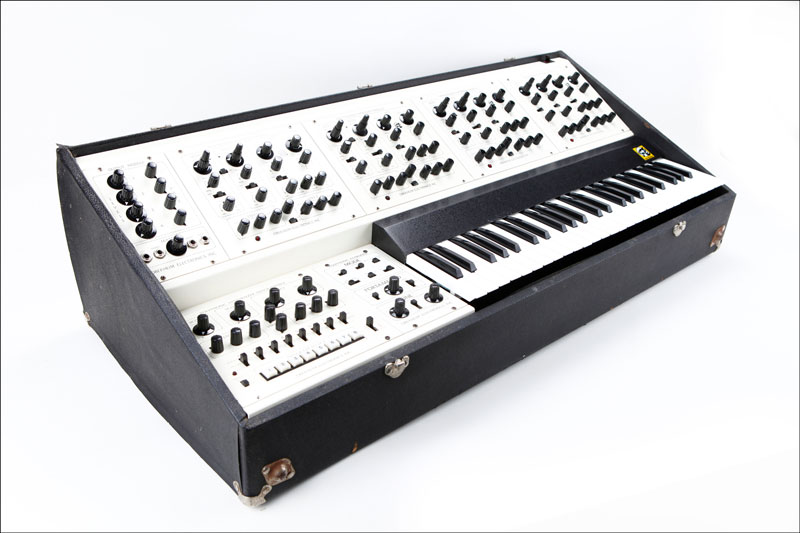 Of course, there were early successes in establishing ways to build polyphonic instruments: Oberheim's Four Voice and related instruments were one such case. Oberheim had already introduced the Synthesizer Expander Module (SEM), a standalone synth voice designed to add extra functionality to your Minimoog or ARP 2600. By connecting two, four, or eight of these SEMs to a single chassis and using a rudimentary means of note allocation, Oberheim was able to create a relatively practical polyphonic instrument. And while the larger models did accommodate for rudimentary preset storage and polyphonic programming, the main peculiarity about these instruments was that each SEM still had completely independent controls—meaning that there were a lot of redundant physical controls, making for a somewhat cumbersome (albeit very capable) design.

Meanwhile, a young musician / engineer named Dave Smith was getting his own business off the ground—Sequential Circuits.

Dave Smith acquired his first synthesizer, a Moog Minimoog, in 1972. It was one of the first few hundred produced, and as such, Dave Smith was a relatively early adopter. Given his experience in computer science and electronic engineering, he started to think about how he could use his experience to expand the Minimoog's capabilities, and perhaps to introduce new products to the growing synth market.

Smith founded Sequential Circuits in 1974, first introducing the Model 600, an analog sequencer / "Complex Wave Generator" marketed toward users of the Minimoog and ARP 2600. Shortly thereafter, he introduced a rudimentary voltage memory module designed to add preset-like functionality to voltage-controlled synthesizers, as well as a microprocessor-based sequencer called the Model 800.

Smith's work with microprocessors was significant. Still a new technology in the mid-1970s, microprocessors enabled programmers to create relatively complex electronic functions without needing to employ significantly complex circuit designs: instead, they could simply generate code for a relatively fixed, small hardware system, which could interact in various ways with analog circuitry. This meant that electronics could suddenly execute considerably more complex tasks than ever before with a smaller footprint than ever before, and, for someone experienced with programming, a whole new world of electronic design became available. This coupled with the release of SSM's single-chip synthesizer function blocks (such as the SSM2030 VCO and SSM2040 VCF) made Smith realize that a new age of synthesizer design might well be on the brink of emerging.

Thus began the design process of the Prophet-5, perhaps the first commercially available microprocessor-based analog synthesizer. Introduced at winter NAMM of 1978, the Prophet-5 packed an astonishing amount of synth into a deceptively simple package: using SSM's (CEM's) high-level synth function block ICs in lieu of discrete circuits, it was able to offer five full voices of polyphony in a relatively small space. And what's more, it provided a reliable and relatively affordable solution to two of performing musicians' most complex demands of synthesizers: polyphony, and patch storage. By using a microprocessor to scan all panel controls, save their values in non-volatile memory, and pass these values on to the synthesizer's analog signal path, the Prophet-5 presented musicians with the ability to easily and reliably store and recall sounds at a moment's notice. In a world where this was a completely new possibility, the Prophet-5 was an instant hit...and the rest is history.

Of course, despite its popularity, many people never had the chance to own an original Prophet-5; and, despite their rock-solid build, as instruments age, they get more complex to maintain. So there are countless people out there who have been dreaming of a Prophet-5 for ages, but for one reason or another haven't picked one up. Now, that could change.

(Note: in the video above, we show off a small set of sounds possible with a vintage Prophet-5...just to give you some sense of what you're in for!)

The Return of the Prophet-5

Now, over 40 years after the introduction of the original, Sequential has introduced the Prophet-5 Rev4, along with a 10-voice companion, the Prophet-10. According to Smith, the Prophet was originally meant to be available in both 5- and 10-voice variants, and this marks the completion of his original product vision. (As an aside: at the time of its introduction, the original Prophet-10 was a bit unstable, and later evolved into the dual-manual / bi-timbral Prophet-10, a different instrument altogether.) These new instruments are faithful to the design of the original Prophet-5, adding modern niceties and updates where appropriate, but overall focusing on maintaining the sound and performance of the much-loved original.

The Prophet-5 features a classic subtractive analog signal path, with two multi-waveform oscillators, a noise source, a resonant lowpass filter, VCA, and two ADSR envelopes per voice. A multi-waveshape LFO and flexible internal modulation scheme allowed for a wide variety of effects, permitting the filter envelope and oscillator B to modulate the filter cutoff as well as oscillator A's frequency and pulse width. This allows the Prophet to achieve everything from the space-tearing sounds of filter FM to clangorous audio-rate oscillator modulation, dynamic PWM, and, of course, the full, rich sounds of straightforward analog pads and key sounds. Additionally, the mod wheel can act as an attenuator for an additional modulation path, allowing a continuously variable mix of the LFO and Noise to modulate either oscillator's frequency or pulse width, or the filter's cutoff frequency. And of course, all of this harkens back to Dave Smith's early inspiration, the Minimoog—though of course, as we now well know, the Prophet-5 is capable of a huge range of sounds not possible on a Model D (not least of all the massive five-voice Unison sound).

With the reintroduction of several authentic Curtis (CEM) chips and SSM-style reproductions (including Dave Rossum's SSI2140 filter), it became possible not only to re-introduce the Prophet, but to provide the sonic performance of each of the original product revisions. With the Rev switch on the front panel, you can easily choose between each original filter type on a per-patch basis, making it easy to find whichever sound best suits your present musical purpose. Additionally, Sequential spent a significant amount of time analyzing the performance of vintage Prophets to discover the sources of of its character, eventually pinpointing several types of electronic fluctuations and inconsistencies between aspects of each voice. In order to capitalize on this vintage "magic," the Prophet-5 and Prophet-10 now include a "Vintage" knob which allows you to vary the overall stability of your sound, with everything from unruly temperaments to complete stability easily available.

This new version adds MIDI and USB connectivity, CV/Gate inputs and outputs, and even a velocity and aftertouch-capable keybed for increased expressivity—making it the most expressive and interconnectable Prophet-5 revision to date. This combined with its hand-oiled black walnut heartwood and steel construction and authentic analog sound makes 2020's Prophet-5 a powerful and welcome addition to a rich lineage of instruments. Alongside the Prophet-6, Prophet-X, OB-6, and Prophet Rev2, and Pro-3, the Prophet-5 and Prophet-10 make for one of the most varied and powerful Sequential / Dave Smith product lineups to date...and it's a blessing to live at a time where so many sonic options are available.

For many, the sound of the Prophet-5 is the de facto sound of synthesizers altogether. Used by everyone from Depeche Mode and Gary Numan to Vangelis and John Carpenter, this instrument has colored the sound of popular culture for decades. Be it in film scores, advertisements, or your favorite radio hit—odds are that you've heard the sound of this iconic synth. And now, you don't need to worry about hunting down a temperamental vintage instrument to enjoy it—instead, you can enjoy an instrument with all the sound and character of the original with the stability of a modern build. I, for one, couldn't be more excited.

In the words of Dave Smith, "It’s not often that you get to revisit your past, retrieve some of its magic, and give it new life...the Prophet-5 was one of the most exciting instruments to appear in an equally exciting time for music and technology. It's gratifying to rediscover that its sound and aesthetics are just as appealing now as they were then."

Curious to learn more about Dave Smith, Sequential Circuits, and the legacy of the Prophet-5? Take a glance at David Abernethy's The Prophet from Silicon Valley, and scope out our articles about the Prophet VS and the history of MIDI here on Signal.