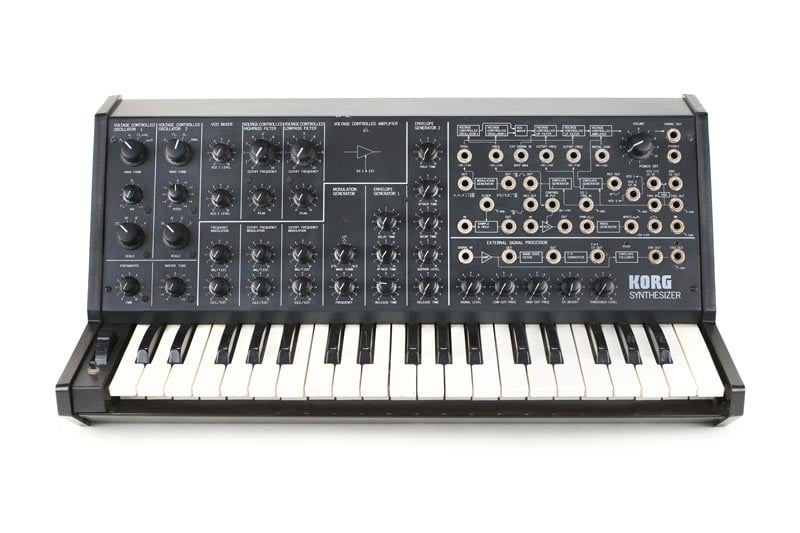 With two oscillators rather than MS-10’s single oscillator, it produced perfect sounds for lead and bass parts. There were two options to compose on it: Use the hard-wired paths that it arrived with or patch over them to interrupt the pre-designated signal control paths to produce your own sounds. This structure made it similar to the $1,295 ARP 2600, though the MS-20 was far smaller and just 40% of the price.

Despite being one of the first affordable semi-modular synths, it did not catch on instantly. Synthesis was still relatively new, and the MS-20 was not instantly loved by its buyers. Instead, by the late ’80s, MS-20s were regular finds in second hand stores, according to The Vinyl Factory.

But one person’s trash is another’s treasure, and the abundance of MS-20s at bargain prices put them in the hands of talented young producers. The MS-20 had a thick robust sound, which was uniquely raw and wonderfully distorted. This was down to its two highpass and lowpass filters with ADSR. The dual filter is perhaps the MS-20’s most recognisable characteristic, producing rich resonance and strange bandpass sounds that were a joy to manipulate.

The MS-20 had two VCOs and a dual filter: a highpass-into-lowpass design not dissimilar to the "Traveler" circuit in some of their prior instruments. The filters provided howling, edgy resonance, which would quickly come to define the instrument's overall sonic signature. It provided a number of means of user interaction: a standard keyboard, patchable wheel and button controls, an open-ended patch bay, and even relatively rare assets of a frequency to voltage converter and envelope follower (collectively called the External Signal Processor, or ESP). With ring modulation, a patchable sample and hold, an LFO, and envelope generators with hold and decay, it could make wet basslines or belching sound effects.

But besides its filters, the ESP is one of its most definitive features, allowing users to plug in other instruments and process them using the MS-20—or even to control the MS-20's oscillators from external sources, which in effect could vary from relatively clean pitch tracking to unpredictable, glitchy effects. This meant the MS-20 was capable of creating strange, experimental sounds if used to process a voice, guitar, or drum machine. All in all, this was a rare feature at the time—and it gave musicians creative options that have kept them coming back for decades.

Its patch bay was also capable of some weird and wonderful sounds. Its semi-modular construction offered stranger options than fixed-architecture competitors such as the Minimoog Model D, taking it closer to the realm of something like the ARP Odyssey, which was rife with potential for intense modulation. Unlike the Odyssey, though, the MS-20 still relied on using patch cables to defeat the normalized signal path. This along with its aforementioned quirks made it a versatile tool for musicians and sound designers.

In 2004, Korg made the MS-20 available to a new audience through its plug in, the Korg Legacy Collection. At the time, the legacy collection could be purchased with a controller, the MS-20lc, which looked like an MS-20 but was instead a MIDI controller. Then came a standalone soft synth, via the MS-20 plug-in. A truly bizarre addition was the DS-10, a 2008 program for the Nintendo DS that recreated the Korg MS range of synthesizers.

Korg then experimented with mass-producing analog synthesizers, at a time when this practice was uncommon for large corporation. They approached this slowly, first producing the Monotron in 2010, and the Monotribe, Monotron Duo, and Monotron Delay in 2011. In 2013, they released the MS-20 Mini, which recreated its analog sound and added MIDI capabilities in a smaller package—and in many ways, this felt like the arrival of a new time for mass-produced analog synthesizers.

Korg followed that up in 2015 with the MS-20 synth kit, which let users build their own full-size device—this was also available in a limited desktop version, which removed the keyboard, lowered the overall profile, and added some extra CV capabilities (such as PWM). Sadly these models did not reach full-scale production...bnd of course, recent years have seen the development of many other analog synthesizers from Korg. The Volca Series, Minilogues, Monologues, and Prologues all feel like modern outgrowths that stemmed from Korg's classic heritage and their recent adventure in rediscovering the MS-20.

And of course, the MS-20's appeal has not been restricted to standalone re-issues; the resonant highpass-into-lowpass filter scheme in particular has become its own paradigm, spawning a huge number of Eurorack interpretations, including the Befaco BF-22 Sallen Key Filter, the Intellijel Morgasmatron, and the Malekko Dual Borg. And of course, the recently-announced Behringer K-2 draws direct influence from the MS-20, bringing its basic sound and workflow into a Eurorack-compatible format.

From Chord Oscillators to Physical Modeling

Synthesizer Polyphony—What Does It Mean?

Which Expert Sleepers Interface Is Right For You?

MIDI to CV, DC-Coupled Interfaces, and Beyond

Techniques and Tips With Janek Gwizdala