Techniques and Tips With Janek Gwizdala

Continuing our exploration of the ways different artists integrate effects pedals into their workflow, we now turn to Janek Gwizdala—an accomplished and multifaceted bass player, musician, recording artist, producer, and vlogger. Known for his unequivocal mastery over one of the grooviest instruments of modern age, as well as a deep passion for effects pedals, Janek possesses loads of creative wisdom of how to combine the two worlds together in ways that are tasteful and very on point.

Recently Janek stopped by our studio to demonstrate, and talk about his approach to creating flavorful and funky synth bass sounds using his trusted instrument and a modest collection of pedals. Before we move on to discuss the specific pedal combos, let's briefly delve into the general reasons why making synth sounds with another instrument may be in some cases better than simply using a synthesizer.

Many Paths Towards The Same Sound

Through the years of studying music, at one point or another perhaps many musicians come to a certain realization that different elements that make up the totality of music are more fluid than how we initially perceive them. Rhythm, harmony, melody, texture, and timbre—all flow into one another, morphing and changing their roles depending on a variety of factors. Spending time closely investigating the field of sound synthesis intensifies and reaffirms this realization, additionally making quite apparent the fact that multiple, sometimes seemingly completely unrelated paths in sound design can lead to the same or similar sounds. This can be a liberating feeling, as one suddenly sees an abundance of options and routes towards the desired sonic character, and is able to choose the path depending on reasons that can be either personal, artistic, and/or pragmatic in nature.

Proficiency and level of comfort on a certain instrument is clearly on top of the list among creative motivations. Being able to fully immerse oneself in playing without having to think about what to do next on a moment by moment basis is a sure key to freely expressing yourself with enjoyment. When a musician has total control over the instrument, it allows them to inject into their playing a multitude of subtleties, thus making even the simplest parts more lively and moving. Thus it is absolutely reasonable for a musician to favor using a certain instrument, if they are more effective at expressing certain musical ideas with it.

A practical reasoning for imitating sounds of other instruments may be as simple as reducing the amount of equipment a gigging musician has to take on the road. Using an original Minimoog for its signature "fat" bass sound may sound great in theory, but if you are constantly on the road you may soon appreciate traveling with a smaller setup and not carrying an additional 35lb crate with you. And while you probably won't get exactly the same sound as you would with the synthesizer itself, still you are able to sculpt a faithful and convincing alternative with its own unique character. 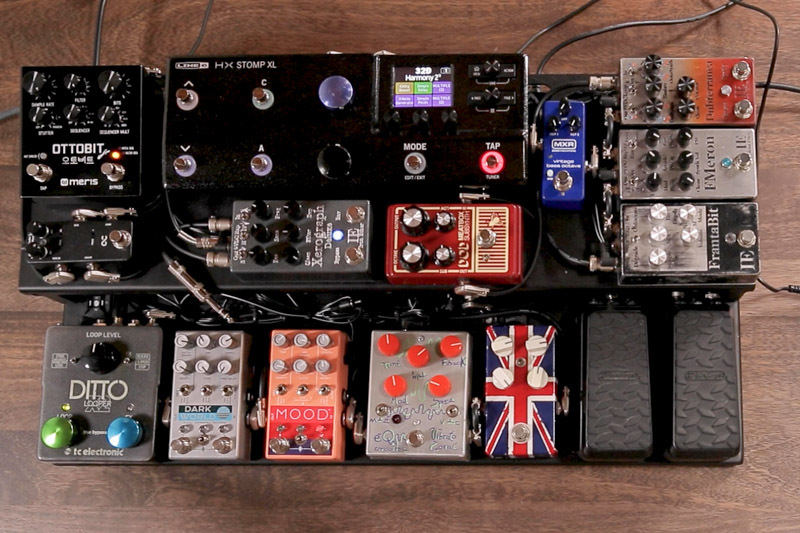 From Electric Bass To Synth Bass

So what are the ingredients that can transform the familiar sound of an electric bass into wobbling synth tones? Being a self-described "pedal nerd", there is no shortage of sounds that Janek Gwizdala can summon from his pedal board and bass guitar. Anything from funky rhythmic loops to gut-rattling drones, and evolving ambient soundscapes is within reach—however, for this video we are focusing specifically on the classic synth bass sound. Luckily, the recipe that Janek brought doesn't require copying his exact pedalboard, and can be easily achieved using a combination of three relatively simple stompboxes.

The first pedal that Janek puts in the chain is an octave pedal. Although an avid Boss OC-2 user himself, the artist does point out that any functionally-equivalent pedal will suit as long as it satisfies your personal taste, and the parameters are set correctly. In our video Janek used MXR Vintage Bass Octave and Boss OC-5 with very satisfying results. The key here is in the settings—the artist prefers to set the pedal to one octave below, fully wet so that no original signal is heard at the output. This results in a very low sub-frequency clean tone, ready to be further shaped and sculpted, just as you would approach a sine/triangle wave from an oscillator in a traditional bass synth sound.

Using classic sound synthesis techniques as a model, the next element in the chain is allocated to some sort of waveshaper that would transform the clean waveform coming from the octave pedal into something closer to a sawtooth, square or another harmonically-rich waveform. Overdrive, distortion, fuzz, bit crusher pedals, and the likes are equally valid choices for the job, each yielding a unique sonic flavor. In our video Janek's showcased that sonic diversity using three different "shaper pedals"—a simple yet effective BugCrusher sample rate reducer by Fredric Effects, an overdriven BB preamp by Xotic effects, and the revered Woolly Mammoth from Zvex.

Deeming it as the ''special sauce" ingredient in the mix, the artist proposes to finish the chain with a characterful filter. Importantly, controlling the cutoff frequency of the pedal with an expression pedal creates the desired dynamics and sonic motion, allowing a hands-off way to achieve the effect of a classic manual or envelope-controlled filter sweep. Controlling that parameter with a modulator pedal, such as EHX 8 Step CV sequencer can also deliver interesting results, especially if a repetitive automatic sweep is desired.

Now that we have settled on the kinds of pedals to use, it's time to talk a little bit about the technique. When we are trying to imitate the effect of one instrument with another, it is important to take into consideration the design, and the mechanics of the original instrument itself, as well as all other elements that contribute to its performance, as well as limitations posed by the gear used. Thus, when we are trying to mimic a keyboard part on a stringed instrument, we need to be mindful of how we play. Muting strings is a good strategy, as it both translates the precise motion of a key triggering a note, and prevents us from confusing the pedal by preventing overlapping clashes of harmonics caused by two or more notes ringing simultaneously. Janek emphasizes that even a standard staccato may not be enough, and one has to practice playing notes that are counterintuitively too short.

Developing a good technique with an expression pedal is also of great benefit, and can't be stressed enough. Rocking your foot back and forth is simple in principle, however doing it in time, and accenting the right moments certainly requires practice. Gwizdala is particularly deft at operating the expression pedal to a point where the filter sweeps seem so ingrained into the fabric of the tone that it sounds almost mechanistic at times (in a good way).

The World of Effects Pedals Is Your Oyster

The world of effects pedals is vast, and it only grows larger on a daily basis. As such, the potential of instrumentalists to transform the tonal domain of their dedicated instruments is ever-expanding. The recent history of recorded music is overflowing with great examples of artists getting creative with their pedalboards in order to achieve remarkable effects. From Whammyfied turntable-like string scratching of Tom Morello to ethereal drones of Oren Ambarchi, effects pedals have potential to change the sound of your instrument entirely.

When we've asked Janek what role do pedals play in his work, whether they are central to the creative practice or merely there to perform functional duties, the artist responded forthwith that for him effects boxes is where the inspiration starts. Surely, many of us can relate to that joyous state where tweaking parameters on a stompbox suddenly unfolds something pleasantly unexpected, which triggers an immediate response from us, and then it all spirals into a rewarding playing/composing/recording session.

During this visit, Janek Gwizdala demonstrated to us that by using only a handful of pedals it is possible to transform the sound of your stringed instrument into the compelling sound of a synthesizer, but of course you don't have to stop there—we urge you to experiment further. Although it is not common to see delay and reverb pedals in a bassist's arsenal, Janek's pedalboard is full of them, and you can see him creatively injecting these effects into his performance. Thus It should be pretty clear by now that there are no hard rules as to what effects one can use with any particular instrument.

Finally, it is worth noting that imitating the sounds of other instruments using your existing setup is a worthwhile exercise all on its own, as it forces you to listen to sounds critically, and reconstructing them opens up new perspectives on the gear that you already have. We hope that both the video and this article gave you a good blend of inspiration and motivation to take a new look on your pedalboard or, well, any other tools you use to make music.

Some Pedals Seen On Janek's Pedalboard

From Chord Oscillators to Physical Modeling

Synthesizer Polyphony—What Does It Mean?

Which Expert Sleepers Interface Is Right For You?