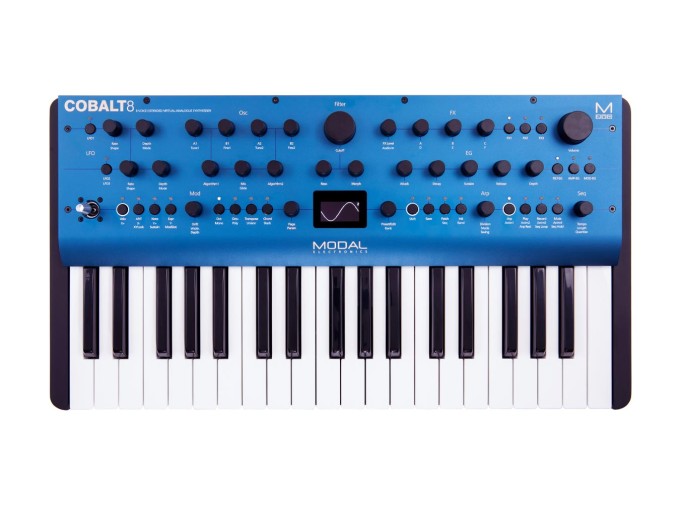 The Cobalt8 from Modal is an eight-voice virtual-analog synthesizer with true polyphony and a rich sounding character. This next-generation analog-modeling synth harnesses all the beauty and power of analog synthesis and brings it under digital control.

The onboard oscillators perfectly model classic analog waveforms, including sine, triangle, sawtooth, and pulse. Group up to 64 oscillators together with eight groups of eight oscillators for earth rumbling goodness. A collection of 34 unique algorithms takes these simple waveforms and adds depth and complexity. These include everything from wave morphing, ring mod, sync, and many more. Each algorithm features a simple-to-use set of controls selected to suit the algorithm at hand.

It wouldn't be an excellent analog synthesizer without a killer filter, and the Cobalt8 delivers with a four-pole morphable multi-mode filter. This ladder filter self oscillates at high resonance settings and does a fantastic job carving out the harmonics from complex waveforms and adding warmth. The highly programmable three-slot stereo FX engine features 11 different algorithms to choose from. These include LoFi, tremolo, chorus, phaser, flanger (positive), flanger (negative), rotary, stereo delay, X-over delay, ping pong delay, and reverb.

The modulation matrix features 12 sources and 55 destinations for full control over your sound. Four routings come prerouted in the matrix that are often connected, but Modal left the rest up to you. Three wide-ranging multi-waveform LFOs provide synced or unsynced modulation. Three dedicated envelopes automatically modulate AMP, MOD, and FILTER and feature both inverted and non-inverted outputs. A four-axis joystick adds tactile and gestural control right at your fingertips.

The keyboard is a 37-key full-sized FATAR that is responsive to your playing style. Aftertouch and support for MPE add another layer of expression and dynamism to any performance. An integrated 512-note real-time/step sequencer features four animation lanes for fully automating your playing. The polyphonic sequencer can be paired with the advanced arpeggiator with performance features such as inversions, sustain latch, transpose, and chord hold. Sync the arpeggiator and sequencer's clock to external sources using the 3.5mm jack that conforms to the Korg/Teenage Engineering standard. MIDI in and out provides an easy way to interface the COBALT8 with external synthesizers. Packed with 500 preset slots, saving and recalling your favorite sounds is easy. Modal loaded 300 of these with selections from accomplished sound designers that really show off what the COBALT8 is capable of. The MODALapp brings direct editing over parameters and presets to your computer or mobile device.

This inspiring instrument is full of surprises that rewards hours of exploration. With a host of easy to use controls and massive sound, it is an incredible piece of gear.

Related ArticlesBest Synthesizers of 2020Affordable Desktops to the Return of Vintage ClassicsModal Electronics COBALT5SVirtual Analog Has a Slim New Look
Product Demo Videos
Making HUGE Super Saw Sounds w/ the Cobalt8
In this video, Jacob explores the Modal Electronics Cobalt8, a modern take on virtual analog synthesis, specifically showcasing its excellent ability to craft supersaw sounds. After all, how super would your saws be if you had up to 64 oscillators at your disposal? The Cobalt8 even expands on the concept a bit further, offering Spread oscillator algorithms with not just sawtooth waveforms, but triangle and square waves too!

But of course, the Cobalt8 has a bunch of other tricks up its sleeve, and later in the video, Jacob showcases ideas for blending supersaws in with some of the other super cool oscillator modes. While we all love the huge, trance-inspired pads that supersaws are known for, but with some clever patch-crafting, you can find a way to bring these super-sounds into any kind of music.
Modal Electronics Cobalt8 Virtual Analog Synthesizer Reviews