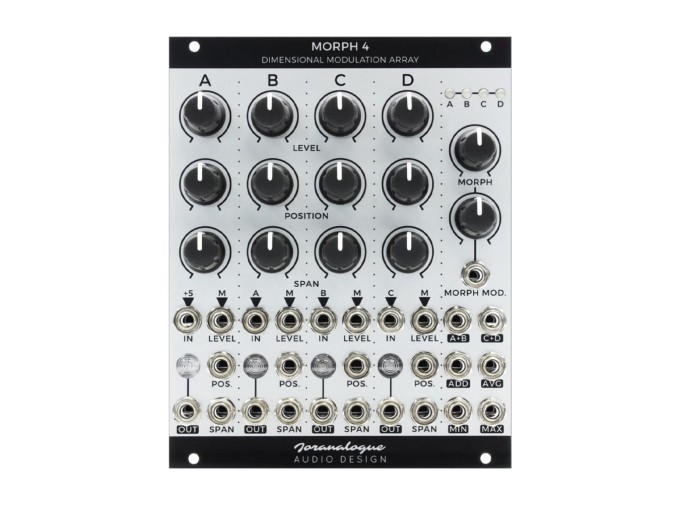 The Morph 4 from Joranalogue is a modulation hub that provides a wealth of possibilities for automating and changing the behavior and characteristics of your Eurorack patch. It allows you to control the amplitude of signals and morphs and combines them into altogether new entities.

This module embraces the often repeated Eurorack mantra, you can never have too many VCAs. A master morph parameter controls the four channels, whose response is variable both manually and under voltage control. It is a macro control knob that affects all channels based on their settings. The response of the channels to the morph parameter are triangular, with the width of the triangle set by the span control, while the maximum point on the triangular morph axis is controlled by the position control. The corresponding CV inputs for position and span adds voltage to the current setting of the knobs. This makes the Morph 4 a powerful scanning VCA, allowing you to continuously fade between several input channels with ease. But of course, the morph control can be overridden by patching into the level inputs, allowing for more traditional VCA behavior.

A +5V offset is normalled into channel A, and the channels are each normalled into each other (A to B, B to C, C to D), allowing a single input signal to be routed to multiple destinations. This also means that, with no inputs patched to the VCAs, using an oscillator to scan between the four channels acts like a psuedo-waveshaper/wavetable with modulatable breakpoints and slopes.

Several combinations of channels are available in addition to the individual outputs. These include A+B, C+D, add (all channels at unity gain), average (lowers gain by 12dB to prevent clipping), minimum (analog AND), and maximum (analog OR). Inputs can be anything from gate patterns to CV signals to audio signals, anything that you'd like to adjust the amplitude over time. This module can act as a central hub of modulation, providing a complex source of modulation signals that are controlled and modulated in tandem or individually that create new and exciting results, from audio processing to mixing, crossfading, panning, and much more. Experiment with patching and you'll no doubt find countless ways to add new life and motion to your patches!