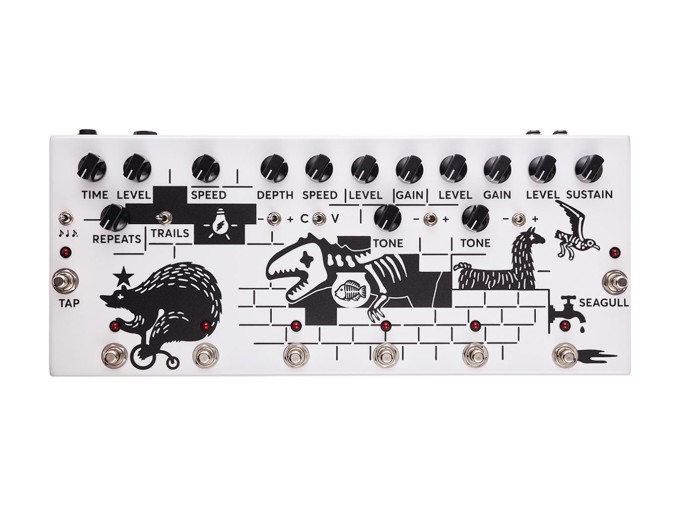 Six of JAM Pedals' signature products hardwired with all analog circuitry is the foundation for the Pink Flow, an all-in-one multi-effect in the truest sense of the word. Inspired by David Gilmore's tone, the Pink Flow features Seagull at the beginning of the chain, a unique effect originally achieved by plugging in a wah pedal backwards, as heard on seminal tracks like "Echoes." Following that is the dynamics and distortion section, loaded with the Dyna-ssoR compressor, the JRC4558D-equipped Tubedreamer overdrive, and Red Muck, a fuzz/distortion featuring a toggle-switch to select between symmetrical or asymmetrical clipping.

For the most flexibility, an FX Loop Send / Return that places external effects placed after the distortion effects but before the modulation section allows for nearly any effect to fit in the signal chain at an optimal position. For modulation and delay-based effects, Pink Flow contains WaterFall, a smooth and lush-sounding BBD chorus / vibrato pedal, the smooth, sweet and transparent 2-stage phaser Ripple and the Delay Llama, a fully analog, BBD delay pedal with a maximum delay time of 600ms, Tap Tempo, and so much more. There's also a two-position toggle-switch for trails mode on/off and an external Tap Tempo input.

For more customization you can remove the bottom cover to reveal three trimmers that allow you to adjust the WaterFall's maximum speed, Delay Llama's maximum repeats, and the Llama's trails decay amount. The front panel also has all the familiar knobs you would want for each of these effects. Ditch patch cables, save your tone, and simplify setup and tear-down time with the Pink Flow.