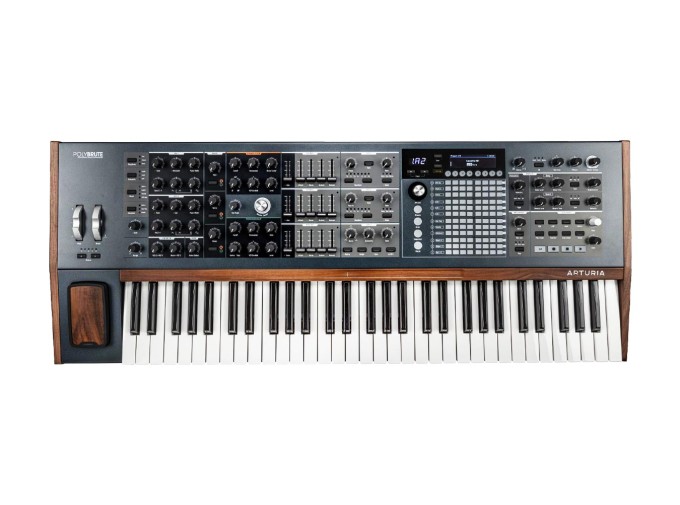 Arturia's PolyBrute is their flagship polyphonic analog synthesizer, a six-voice bitimbral synth with preset morphing and a host of deep features that make it versatile and unique. Complete with morphing functionality, loads of expressive user controls, and the matrix-style patch routing scheme that made the MatrixBrute so powerful, Arturia have finally delivered an instrument that we have been dreaming about for years: a polyphonic addition to the Brute family of synthesizers. And happily, the addition of these new sonic possibilities and new means of expressive control make it something far greater than we could have expected.

PolyBrute's six analog voices each have two oscillators with sub-oscillator and a noise source. In addition, several waveshaping capabilities morph the simple waveforms into new waveshapes with their own harmonic character, including PWM and a metalizer. These can be further shaped with the two onboard filters, one 24dB/oct ladder and one of Arturia's classic Steiner-Parker filter that has graced many of their previous products. The effects section features three digital stereo effects including modulation, delay, and reverb which add space and depth to your sound, as well as a master EQ—added in firmware version 2.0—that adds a final polish from one of seven available presets.

The keyboard is a 61-key keybed with velocity sensitivity and aftertouch. As of firmware version 2.0, PolyBrute has added a chord mode found similarly in their KeyStep line as well as three duophonic aftertouch options, in which aftertouch only affects the last note or group of notes you play. Additionally, situated directly above the keybed and integrated with the wooden panel is a ribbon controller that offers two and a half octaves of control. In addition, a pitch bend and mod wheel are available, but where the PolyBrute gets really expressive is the Morphée. This interactive surface features both XY control as well as pressure-sensitivity which adds a new dimension to your playing style. An onboard arpeggiator and 64-step sequencer allow you to step away from the keybed and automate your playing. In addition, three lanes of motion sequencing allow you to sequence the parameters, providing dynamic adjustment of the sonic character of the PolyBrute. The sequencer can be synced to MIDI or analog sync with an input and output on 3.5mm jacks.

The 12 x 32 mod matrix provides routing for the parameters available on the front panel, plus some settings that are under the hood. Three envelopes and three variable waveshape LFOs per voice make up the primary modulation sources, which can be freely routed. The mod matrix also offers control over the depth of the routing, allowing for subtle modulation of a parameter with a modulation source instead of the full range. The menu system provides deep editing of controls, displaying them on the crisp OLED screen. Parameters can be selected through the menu, or with the press of a button and a turn of a knob, you can easily select and change a particular parameter. While the sound sources and filter are analog, the PolyBrute is digitally controlled, allowing for up to 768 presets in eight banks of 96 presets.

Of course, one of the PolyBrute's most notable features is the morph control, which continuously and dynamically fades between the settings of two groups of panel settings. This isn't a simple crossfade—it actually acts as a macro control which morphs between the individual parameter settings of two distinct sounds. This is a performative and expressive control that morphs between sounds and can unlock a range of new tones in the space between two completely separate timbres. This can be subtle if desired—simply use two sounds that have only minor variations between them. Alternatively, it can be extreme, allowing you to find an infinite world of combinations, creating peculiar and unexpected soundscapes by drifting between drastically different tones. The morph parameter is even available as a modulation destination, allowing you to automate changes to the timbre as you play.

Big sound, expressive playing, and deep editing of parameters with the assignable mod matrix make the PolyBrute an absolute knockout of a synthesizer. Whether you just want the simple and beautiful sound of an analog oscillator through a filter or a continuously morphing fade between two presets and motion sequencing of parameters, the PolyBrute provides a range of options for all playing styles.

The PolyBrute has lots of synthesis options with two oscillators per voice that have the standard analog oscillator options as well as wave folding and FM. Each voice has two different types of filters with multiple routing options and there are built in effects on the synth. There are three envelopes and LFOs per voice for plenty of modulation options, and it has a mod matrix like the MatrixBrute as well as a sequencer.

Best Gear of the Year : Part One : Staff Picks
It's been a massive year for hardware instruments, modular synthesizers and as we approach the end of this year we've decided to take a look back at some of our favorite new synths, modules, and more!

In part one of this series we asked the crew in the office what they were most excited to see arrive in 2021 in the category of synthesizers and modules!
Best Gear of the Year : Artist Picks Part 1
Wow! We got a hold of some of our favorite content creators to talk about their favorite piece of gear they got in 2021
Arturia PolyBrute Polyphonic Analog Keyboard Synthesizer Reviews
Register with :