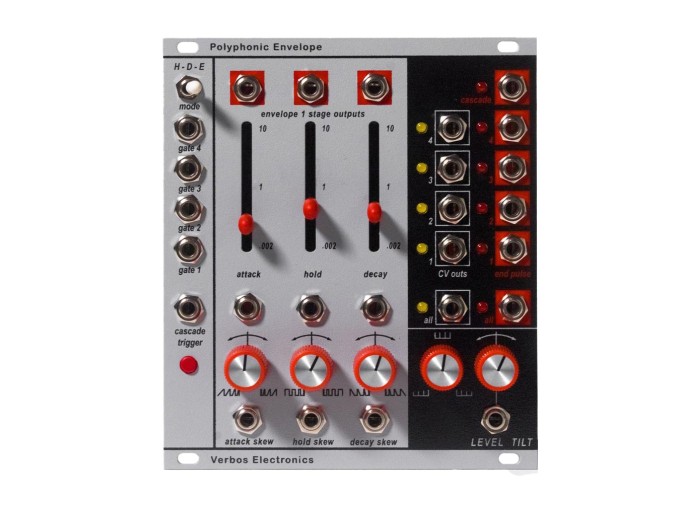 Design cascading, interactive sonic modulation with the Verbos Electronics Polyphonic Envelope, a quadruple envelope generator with event-based internal modulation and a variety of outputs. Tactile and flexible, all of Polyphonic Envelope's channels are linked directly to the AHD controls found at the center of the module, with each stage offering up to 10 seconds of duration, complete with CV inputs per stage. Envelope 1 even offers per-stage pulse outputs for controlling other modules.

Though you can trigger each individual envelope independently, you can also introduce a cascading trigger function that can be handled manually or via external pulses. The Cascade option triggers each envelope sequentially via one of three modes, each of which determines at which stage of one envelope the next envelope will activate. When used together, you can create complex chains of envelope progressions for handling your voice's amplitude, filter cutoff, FM depth, or anything else you'd like to hear morph over time!

Though that already seems like a solid amount of possibility for introducing lines of arpeggiating envelopes, the Polyphonic Envelope offers further control for each output via the stage skew controls. These three bipolar controls will offset each envelope's stage times relative to the others—shortening or lengthening attack, hold, and/or decay (complete with voltage control for each parameter). This not only goes for the envelopes stages, but the included level tilt section also impresses this functionality on the envelopes' respective amplitudes, great for crescendoing and decrescendoing envelopes. All four envelopes can be patched individually or through the all output, focusing on the most prominent envelope at any given time.

With individual pulse outputs for each EG, the all output, and even the cascade output, the Polyphonic Envelope serves as a highly integratable source of shaping and forward momentum for any Eurorack system.