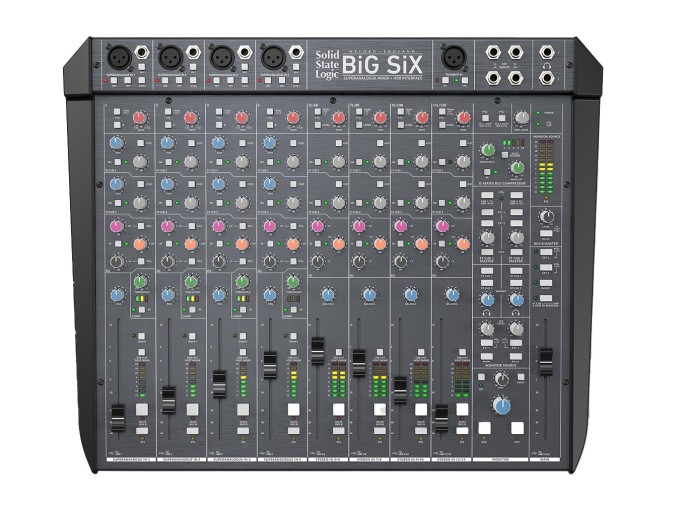 Sturdy and robust with a flexible routing system, Solid State Logic has made yet another brilliant desktop mixer built with complete one-to-one channel I/O as well as a 16-channel audio interface: welcome, the BiG SiX. Building upon the solid foundation that is the SSL SiX, BiG SiX is truly the natural successor that we've all been waiting for. Feeling truly like a collaboration between the SSL community and the brand itself, SSL has taken all the previous criticisms of SiX and implemented numerous improvements and additions, including channel count, inserts, and making this desktop mixer a highly customizable audio interface!

Sticking to the beautiful form and shape of the original SiX, the SuperAnalogue preamp channels, known as their "money channels", showcase the same high gain preamplifiers with the ability to support mic, line, and instrument signals. These money channels include an expanded three-band EQ with the addition of a mid frequency bell-shape band, while still retaining the flexible low and high frequency bands. Without compromising the one-knob ease-of-use, the channel compressor is now a much smoother experience for a larger pool of use-cases. Additionally, each money channel has an insert switch with dedicated 1/4" jacks on the back for sending and returning the affected signal, making it easy to setup without the need of the previous DB25 breakout setup.

Not only doubling down on the money channels, BiG SiX expands its number of stereo input channels to four, each with stereo balanced input jacks on the rear. These channels also include a fixed version of the fantastic three-band EQ found on the money channels, offering more sonic shaping throughout your entire mixdown. All of the channels previously mentioned not only have a wide range of gain, panning/balancing, and 100mm volume faders, but routing these signals has also become more flexible. The two stereo cues for each channel include a post-fader button option for the cue to represent what is being mixed in real time, and muting your channels still pushes your signals to the Bus B stereo output for further processing.

For additional signals that don't need tons of attention-to-detail on levels or EQing, the two external stereo inputs have a simple setup but still have multiple ways of being routed. Allow you AND your artists to monitor your signals with the two headphone outputs, with individual routing options to monitor stereo cue one and/or two, and alternate between two sets of studio monitors with the Alt button. Additional monitoring controls include dimming as well as muting, or cutting, the entire signal. Another tool to mention that needs no introduction is the G-Series Bus Comp that is engageable in a multitude of ways, but typically glues your signals together on the main bus for a solid final polish—now with an option for auto-release for smoother sounding release times! The main channel can also implement a master stereo insert for additional processing to your entire mix, such as a final EQ, extra compression, or anything else to finish your track.

To tie all these amazing features together, BiG SiX not only has a phenomenal back panel of routing options, but it also is capable of interfacing with your computer and DAW thanks to it being an audio interface. Sporting a USB-C port, BiG SiX has individual routing options per channel for a variety of use cases, blending digital and analog signals into one beautifully summed signal. If you want the power of SSLs renowned sound at your studio, be it personal or professional, add BiG SiX to your setup.

Related ArticlesStaff Picks: Best New Studio GearOur Favorite Recording Equipment of 2021
Product Demo Videos
The design of BiG SiX
Niall Feldman, Director of New Products at Solid State Logic has been with the company for over three decades and has been instrumental in the development and support of some of our most iconic consoles, including 4000E/G, 9000J/K, Duality, AWS and most recently SiX and ORIGIN.

In this video, Niall discusses the design principles behind BiG SiX, taking you on an in-depth tour of the feature set, where inspirations came from and how the evolution of SiX led to the next stage of SSL hybrid production tools, BiG SiX.
BiG SiX - The essential SSL studio
You asked...We listened. Introducing BiG SiX.