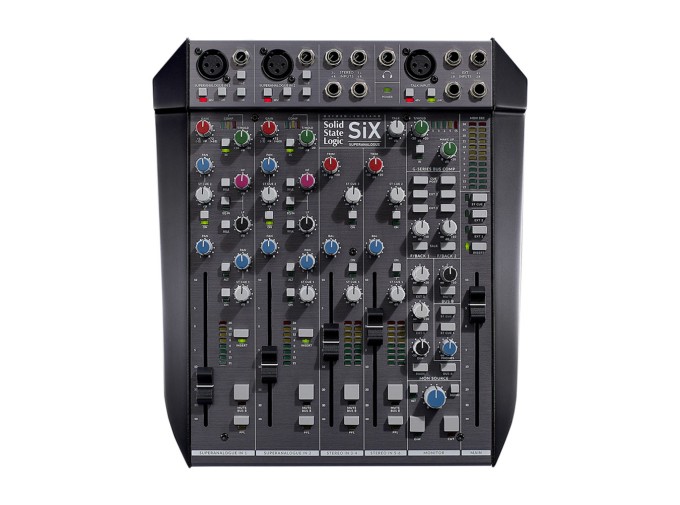 The SiX continues SSL's tradition of providing incomparable utility and sound quality—this time in the form of a small desktop mixer. While at first glance it bears resemblance to other small-format mixers, a close look reveals that SiX provides a staggering number of routing options that, when paired with the integrated SuperAnalogue preamps and G-Series Bus Compressor, turn it into a formidable tool for sound management in the studio and on the stage. Equipped to handle any signal you can throw at it, the SiX will guarantee that your mics, synths, drum machines, and external effect processors will sound as full and clear as they possibly can.

The SiX's first two channels alone offer tremendous sonic potential. Each of these mono channels features a SuperAnalogue preamp, with inputs equipped to handle Mic, Line, and Hi-Z/Instrument-level signals: so you can run virtually any piece of gear through this console. Both SuperAnalogue channels provide a switchable, hyper-adaptable one-knob compressor with signal-dependent attack/release/ratio, auto-makeup gain, and adjustable threshold control. The signal then passes along to a two-band EQ borrowed from SSL's larger analog consoles, with shelving and bell-curve modes for extensive sonic sculpting options. Each of these channels provides the option for integrating balanced insert effects as well—so if you need to tie any other external processors into your signal chain, it is easily possible.

Two dedicated stereo line input channels provide a perfect place to connect your high-end synths, samplers, and more. These channels do not feature quite all the bells and whistles as the first two SuperAnalogue channels, but they do offer the same 100mm channel faders and eight-segment LED meters, making it easy to control and visualize the state of your mix.

All four channels provide two stereo cue sends. Unlike most small mixers' Aux and FX send sections, these Cue sends provide an uncommon level of control: while they certainly can be used as generic effects sends, they can also easily be used to set up entire alternate Cue mixes, useful for artists in your sound booth or tracking room, or for creating separate main and monitor mixes on stage. If you think of these as general-purpose alternative mix controls, the extent of their potential uses will quickly become clear. Additionally, the SiX's channel mute switches are much more than meets the eye: rather than simply removing the channel from your main monitor output, the mute switch re-routes "muted" channels' audio to "Bus B": a separate stereo output which could be routed to alternative monitors or anywhere you might desire.

As one might expect, the monitor controls also feature extensive signal selection and routing options. Additionally, they provide dedicated dim and cut controls, perfect for use in the studio, as well as a mono sum switch, great for helping to assess the mono-compatibility of your mix. And of course, the integrated G-Series bus compressor alone is worth the price of entry: based on the bus compressor found in the SL4000G console from 1989, it provides controls for threshold and makeup gain and with only slight tweaks can glue together any mix. Nothing sounds like this compressor.

It's difficult to look at this feature set and not be excited: SSL's SiX provides a huge amount of utility for the price. And, in a way that only seems possible with SSL, this utility transcends the realm of practical concerns into the realm of creative decisionmaking: the SiX will not only make recording and performing easier, but it will turn the process of mixing into a source of inspiration.

Related ArticlesStaff Picks: Best New Studio GearOur Favorite Recording Equipment of 2021Type to Rhythm MachineInteractive Live Stream and How to Use It
Product Demo Videos
Performance Series : Lonefront : Live PA with a Eurorack Synthesizer + Roland 909
Ross Hutchens AKA Lonefront has been steadily rising in the scene with his explosive live PA Techno sets, performing all over the country with some of the biggest names in dance music.

We invited Ross to walk us through his live setup and show us how he uses modular synths in tandem with drum machines and hardware effects to create his pulsating dance floor heaters!
SSL SiX Hear it in action
Join us in the studio with with artist Goldn and producer Loz for a production session to hear how Six sounds and see some of its features in action. We overdub some drums and a fresh vocal on their track Honda. When we've finished recording we sum the track.
SSL SiX - Artist Headphones and Talkback
This video gives you a brief overview of how to create artist headphone mixes with talkback on SiX.
SSL SiX - Monitoring
This video gives you a brief overview of how to use the monitor section on SiX.
Solid State Logic SiX Desktop Mixer Reviews
Register with :