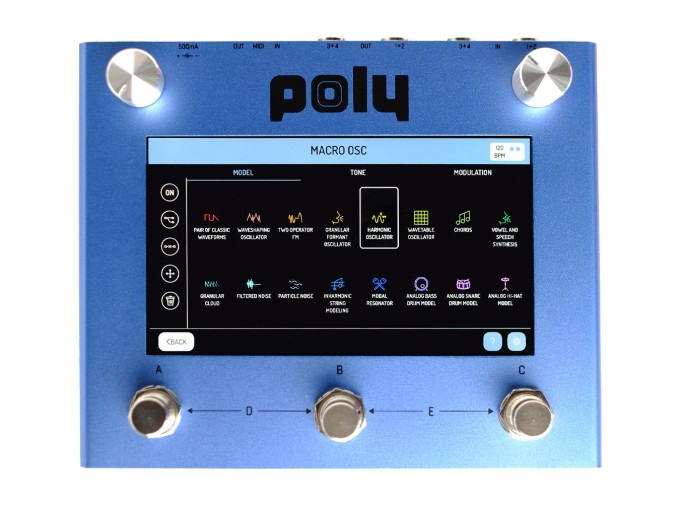 With Beebo, Poly Effects believes that pedals should not be limited to the same basic effects types, but allow the user to combine basic building blocks into more complex processors, or even into powerful synthesizers. Thanks to the beautiful 5" touch screen, patches are presented to the user in a graphical patching environment with free rein over routing audio paths and control data. And with MIDI capabilities and quad audio inputs and outputs, the sky's the limit with Beebo.

If there's a type of effects processing you're interested in, chances are that some combination of Beebo's 94 modules can get you where you need to be. The basic effect types are generously covered—chorus, delay, phasers, and more can all be utilized on their own or in tandem with others to create rich variations on classic effects. But Poly Effects also took the chance to throw some more esoteric modules into the mix, such as granular processors, harmonic tremolo, and reverse loopers. It doesn't end there, because as of Firmware 3.0, the convolution and impulse response power of Digit has merged with Beebo into one firmware, presenting all the modules from both pedals to effects artists at once for sculpting their sounds as they please.

Should all that somehow not be enough, Beebo could also be an entire modular synthesizer disguised as a single effect pedal. Like the effects modules, the user is provided with plenty of basic functions to get started, such as LFOs, ADSR envelope generators, step sequencers, and filter modules. But Poly Effects has also adapted the code from several Mutable Instruments modules, with aspects of favorites such as Rings, Plaits, and Marbles available for use within Beebo. One can even connect their external gear to Beebo's TRS MIDI ports, to control or be controlled by the patches loaded into Beebo.

Beebo provides a totally new spin on the idea of multi-effects pedal. Not many other pedals can match the power and flexibility provided by all the modules included in Beebo, whether your interests lie more in sophisticated effects chains or dense modular synthesis patches. Thanks to the USB port, patches may be saved and shared with users across the world, facilitating a vibrant community of other users passionate about effects and synthesis. If you dream of crafting powerful effects chains or dynamic synthesis processors in a highly compact form, look no further than Beebo by Poly Effects.

Related ArticlesAlternatives to Expression PedalsAtypical and Automated Methods for Controlling EffectsMaking Your Bass Guitar Sound Like a SynthesizerEffect Pedal Signal Flow Tips for Synth Sound DiscoveryBest Effect Pedals of 2020From Compelling Reverbs to Innovative Multi-EffectsUnlocking Your Effects Pedals with MIDITips for Extending Pedals with Digital ControlTurning Reverbs into Instruments with FeedbackBreaking Down the Examples in Our Reverb Feedback VideoWhat is Reverb?Ambient Sonic Spaces, or Deconstructing Spacetime?
Product Demo Videos
Turning Reverbs into HARSH Instruments with Feedback
Manipulating feedback loops is one of the most interesting ways to explore sound, and reverb is one of the most evocative effects for placing sounds in space. Thus, curious minds are certainly wondering: what happens when you use reverb effects with feedback techniques?

In this video, Jacob gives a rundown of some of his favorite ways to use reverb pedals in feedback loops, and allowing the effect to become an instrument in itself. Touching on topics like no-input mixing, adding Eurorack modules to the mix, and strange convolution, this video aims to serve as a springboard for trying out reverbs of all kinds in ways you might not expect.

Specifically, we highlight these tricks with the Red Panda Context, the Strymon Night Sky, the Gamechanger Audio Light Pedal, and the Poly Effects Beebo, but we encourage you to try these patches with any and all reverbs you might have hanging around the studio. After all, this video is all about experimentation, and these ideas are meant to be explored, expanded upon, and inviting you to embark on new sonic journeys.
Poly Effects Beebo Visual Modular Multi-Effects Pedal Reviews
Register with :