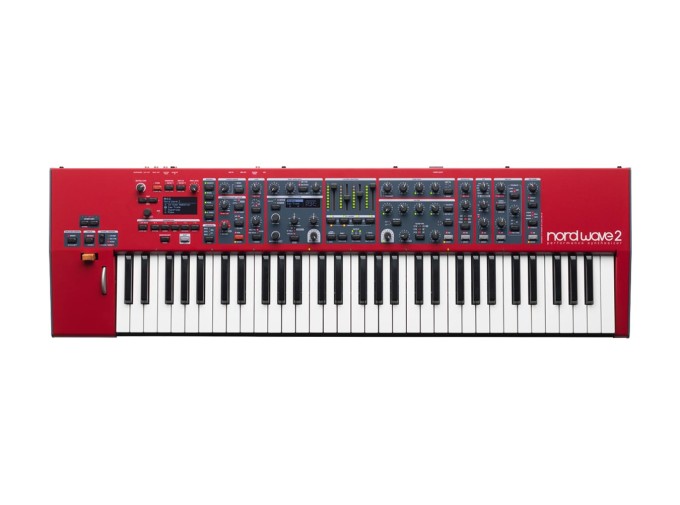 The Nord Wave 2 is an even more powerful reimagining of the original Wave, providing performing keyboardists access to virtual analog, FM, wavetable, and sample-based synthesis techniques. Keeping all the most critical features of the original Wave and adding the capacity for 4-part multitimbral behavior, complex splits and layers, a fully-featured arpeggiator, and more, the Wave 2 is perhaps Nord's most powerful synthesizer to date.

The Wave 2 provides users access to up to four distinct timbres simultaneously, each of which provide a choice of four primary sound production methods. The oscillator section can produce virtual analog, FM, wavetable, and sample-based operation. The virtual analog engine can produce simple waveshapes, continuously variable shapes, novel combined waveshapes with variable detuning, hard and soft sync sounds, and noise. The wavetable mode provides an enormous number of wavetables from smooth to jarring, and the FM mode allows 2, 3, and 4-operator FM for the creation of both harmonic and extreme inharmonic tones.

One of the areas in which the Wave 2 shines, though, is in its sample engine. The Wave 2 comes with tons of samples from the Nord Sample Library 3.0, and additionally supports the use of user samples via Nord Sample Editor 3. This means that you can make the Wave 2 sound like literally anything you want—collect your own samples and then create rich, layered instruments using any types of tones you want.

The Wave 2 also features six analog-modeled filter types, with multiple highpass and lowpass types, a bandpass filter, and even a striking emulation of the classic Moog-style ladder filter, reproducing the sound of the original with remarkable clarity. The filter and virtual VCA each have their own ADSR envelopes, while an additional LFO and AD/AR envelope per layer allow cover more general-purpose modulation duties.

One of the most interesting characteristics of the original Wave was the "morphing" concept—a feature which allowed users to perform macro control over several parameters simultaneously from a single performance control. The Wave 2 maintains this ability, and adds several more sources for control of morphing: velocity, aftertouch, performance wheel, and the external control pedal input can now all be used as morph sources.

Multitimbral behavior in the Wave 2 can work in a number of ways. Each of the synth's four "parts" (timbres) features its own dedicated volume and pan faders for manual control of layering...but there are also advanced options for creating splits and layers. The Split mode lets you set up up to four distinct keyboard zones with optional crossfades, meaning that you can make sounds that gradually change in character between layers as you play up and down the keyboard. Additionally, you can even latch and hold specific layers and play another sound on the top—the options are nearly endless.

All of this combined with a rich FX section, 61-key, aftertouch-capable keybed, advanced polyphonic arpeggiator with intricate gating schemes, and rugged Nord build quality makes for an intensely powerful synthesizer unlike anything else out there. Take the best of all sorts of synthesis methods and layer them on top of one another—Wave 2 does it all.

Some of LA's grooviest musicians, Brandon Coleman and Ronald Bruner, stopped by the Burbank showroom a while back and laid down an impromptu jam session on the Nord Wave 2 & Drum 3P

Watch as these two lay down some of the most fun spontaneous improv we've heard at our shop in quite some time. Check out the linked Signal article above for a look at the long list of accolades these two have under their belts, and keep your eyes out for more...Coleman has a new project emerging soon from Brainfeeder, and no doubt we'll see both his and Bruner's names keep cropping up alongside other amazing and talented artists!
Nord Wave 2 Performance Synthesizer Reviews