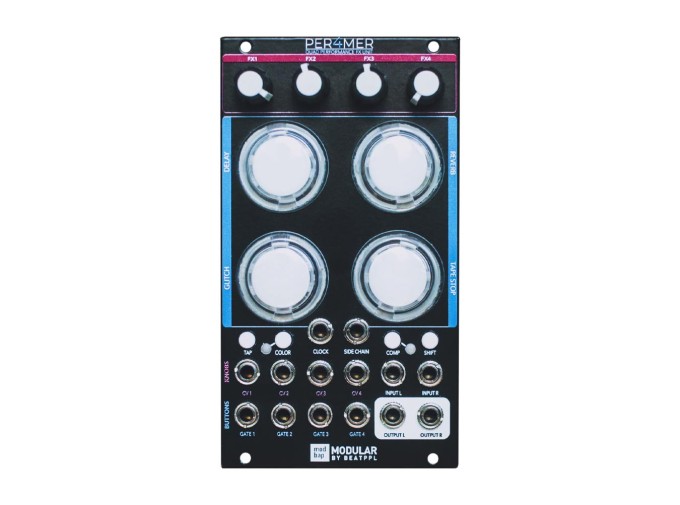 Modbap Modular's premiere Eurorack module is the Per4mer: a quad performance effect processor that brings DJ-style effect workflows into your modular synthesizer. Complete with four performance effect activated by arcade style buttons, several coloration presets, and a built-in compressor, the Per4mer is the perfect effect to add at the end of your signal chain for on-the-fly, engaging effect performance.

Built on the ElectroSmith Daisy platform, Per4mer provides a high-quality sonic character that performers will love. The ingenious workflow makes using it live super intuitive and fun: each of the four large arcade-style buttons corresponds to a single stereo effect, allowing you to engage processing at a moment's notice. These effects include a classic Delay, a Reverb, and the super-fun Glitch and Tape Stop modes. Glitch is a beat repeat-style effect, while Tape Stop offers classic pitch manipulation techniques at the push of a button. Each of these effects shares four multi-purpose knobs, which are mapped to separate parameters in each effect. The arcade buttons offer both latching and momentary response as well as activation by incoming gates, and each of the four multi-purpose effect controls offer dedicated CV inputs—making this module perfect for everything from super hands-on performance all the way to sequenced or generative effect generation.

Per4mer also features a preset Color processing section with four modes: Classic, Lo-Fi, Saturation, and Wax. Classic mode switches to 16kHz, 12-bit audio quality reminiscent of early samplers; Lo-Fi mode takes this even further and reduces to 6kHz, 8-bit quality. The Saturation effect is great for adding soft clipping and some high-end roll-off, for an almost tape-like response, while the Wax preset adds some noise, clicks, and the vinyl-like warble and hiss we all know and love.

The built-in compressor's internal adjustments are also accessible via the four FX knobs, allowing for control of compression ratio, threshold, attack time, and release time. The compressor also features sidechain operation via the dedicated sidechain input or from the tap tempo or external clock, allowing a wide variety of ways to engage classic pumping and swelling effects.

We've been waiting for this style of effect processor for ages—and we're thrilled to see Modbap Modular come out of the gates with such a strong first offering. If you're looking for a dynamic and engaging way to interact with your performance effects, the Per4mer is the perfect choice for your Eurorack system.

Related ArticlesBest Eurorack Modules of 2020Oscillators, Filters, Effects, & MoreModbap Modular Trinity + Hue Demo / ReviewCorry Banks on His Newest Drum Synthesizer and Audio Processing ModulesSuperbooth 2022 CoverageNew Synthesiers, Drum Machines, Eurorack Modules, and More
Product Demo Videos
Modbap Per4mer Eurorack Effects Explanation and Jam by Trovarsi
Our friend Trovarsi came by to show us some of the sounds of the Modbap Modular Per4mer and explain how some of its features work. The Per4mer has four arcade buttons that switch on DJ style effects (delay, reverb, glitch and tape stop). There is also a color processor that gives everything you pass through it the sound of a digital sampler, or some saturation or a vinyl emulation. The Per4mer has a compressor that can do regular compression as well as sidechaining or compress a signal in time with a clock.

Of course since the Per4mer is a eurorack module you can trigger the effects with triggers instead of pushing the buttons, and you can control the knob settings with the CV inputs. The Per4mer is also stereo in and out!
Modbap Modular Per4mer Quad Performance Effects Reviews
Register with :