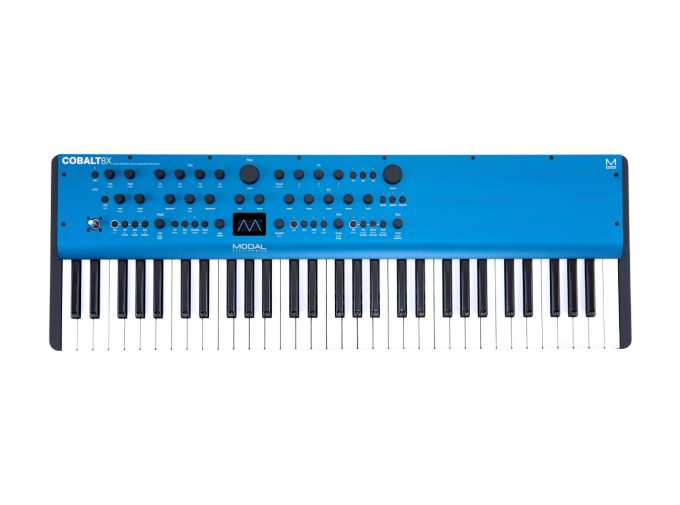 Modal’s Cobalt 8X may look similar to their other flagship synthesizer, the Argon, but this eight-voice polysynth has a distinct character all it’s own, and a seemingly endless bag of tricks and features to keep you inspired and coming back for more. The core of the Cobalt 8X’s rich sound is its unique virtual analog oscillator implementation—you’ll find standard oscillator functions and shapes like sine, saw, and pulse, but on top of those traditional functions are 34 algorithms that greatly expand Cobalt's sonic potential. You’ll find cross and ring modulations, wave folding and shaping, sync functions, filtered noise and many more. With some finesse, these shaping and modulation algorithms can help you in generating massive super-saws, or detuned stacks of split square waves. The possibilities are near infinite when you take into account that you can assign two algorithms per voice, and control up to eight simultaneous voices!

Modal took great care in designing additional features that make the Cobalt line of synthesizers ooze character, including a brand new morphing four-pole filter design that offers both resonant and balanced responses. A suite of true-stereo effects are available for bringing your sounds and patches to the next level. The Cobalt 8X has 11 on-board effects including phasers, flangers, delays, reverbs, and others to animate and an extra layer of polish to your sounds.

The Cobalt 8X was designed for performance, from it’s 61-key Fatar keybed and assignable joystick, to the ergonomically laid out controls and polyphonic sequencer, this synthesizer is sure to inspire creativity. The built-in modulation matrix allows for up to 12 parameters to mixed and combined with variable control from aftertouch, the joystick, or other sources, allowing control over the built-in effects, three modulation envelopes, and more. Bundled with the Cobalt is Modal’s companion app, available for PC, Mac, as well as smartphones and tablets, the application allows you to make and automate dynamic changes, manage and create presets and sequences, as well as backup your data. The Cobalt 8X has a bounty of performance features, as well as quality of life considerations that make it truly a force to be reckoned with.

Related ArticlesBest Synthesizers of 2020Affordable Desktops to the Return of Vintage ClassicsModal Electronics COBALT5SVirtual Analog Has a Slim New Look
Product Demo Videos
Making HUGE Super Saw Sounds w/ the Cobalt8
In this video, Jacob explores the Modal Electronics Cobalt8, a modern take on virtual analog synthesis, specifically showcasing its excellent ability to craft supersaw sounds. After all, how super would your saws be if you had up to 64 oscillators at your disposal? The Cobalt8 even expands on the concept a bit further, offering Spread oscillator algorithms with not just sawtooth waveforms, but triangle and square waves too!

But of course, the Cobalt8 has a bunch of other tricks up its sleeve, and later in the video, Jacob showcases ideas for blending supersaws in with some of the other super cool oscillator modes. While we all love the huge, trance-inspired pads that supersaws are known for, but with some clever patch-crafting, you can find a way to bring these super-sounds into any kind of music.
Modal Electronics Cobalt 8X Virtual Analog Keyboard Synthesizer Reviews
Register with :