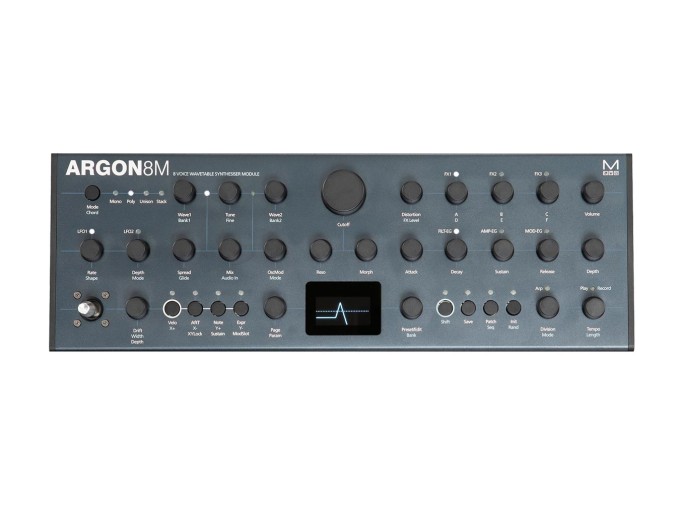 The Modal Electronics Argon8M is a desktop version of the Argon8 synthesizer, providing the same eight-voice polyphonic wavetable engine in a smaller package. It features eight voices, each with four wavetable oscillators. It includes 120 waveshapes, split into 24 banks of five morphable waveform sets. These include wavetables from the Modal 002, EDM-style wavetables, and analog-style waveforms found on classic synthesizers. The two pairs of waveforms can be mixed together to create new, more complex waveforms. Voice drift allows for subtle shifting in pitch between the oscillators, allowing for additional analog-style depth to the sound.

Waveforms can be altered using the eight wavetable modifiers and 32 static wavetable processors. The modifiers include FM, ring mod, and sync modes. The waveform processors include wavefolders, phase shapers, rectifiers, and de-rezing. The filters on the Argon8M are two-pole multimode filters with selectable algorithms. The filter can morph from lowpass to highpass filter modes with notch or bandpass in the middle. After the filter, the audio path reaches the FX section. The FX includes a static distortion, useful for adding additional grit and warmth. An additional three FX slots are available which can be assigned a range of FX types including different delay, lo-fi, reverb, flanger, and chorus types. The delay times can be synchronized to the BPM of the current track.

The Argon8M features a robust modulation matrix, with the ability to route 11 mod sources to 52 modulation destinations. Each voice has three four-stage envelopes, two of which are hardwired, one to the amplifier and one to the filter. The third envelope is a freely assignable envelope which can be routed to a destination by holding the button down and turning a knob. The LFO section has both poly and global LFOs which can sync to the BPM of the project or run freely and go well into the audio range. The spring-return joystick allows for four axes of modulation with the ability to free the position of the joystick using the X or Y lock buttons. The sequencer is very powerful, with up to 512 steps and four lanes of recordable/editable automation. Additionally, an arpeggiator is available, with up to 32 steps, 31 direction modes, and 16 tempo divisions including triplets. Both the arpeggiator and sequencer can run at the same time.

The interface of the Argon8M is very playable, with almost every function available as a front panel control. Secondary and tertiary functions can be accessed using the shift modes. The large OLED screen shows parameter changes in real time when you change an encoder. It also displays things like oscillator waveshape, filter slope, and modulation routings. Additional settings and routing can be accessed using the menu available on the screen. Save and recall your sounds easily with the 500 patch locations, 300 preset and 200 user defined. Additionally, up to 100 sequencer and 100 FX presets can be stored. The Argon8M allows for use as a desktop synthesizer, or can be mounted in a 19" rack using rack ears.

As of the release of Argon8 firmware V2.0, the Argon8 has tons of new features, such as EG curve shape control, polyphonic step sequencing, chord inversion, and even MPE operation. That's right, you can now control your Argon8M with the MPE controller of your choice, making it an uncommon and powerful tool for expressive sound design.