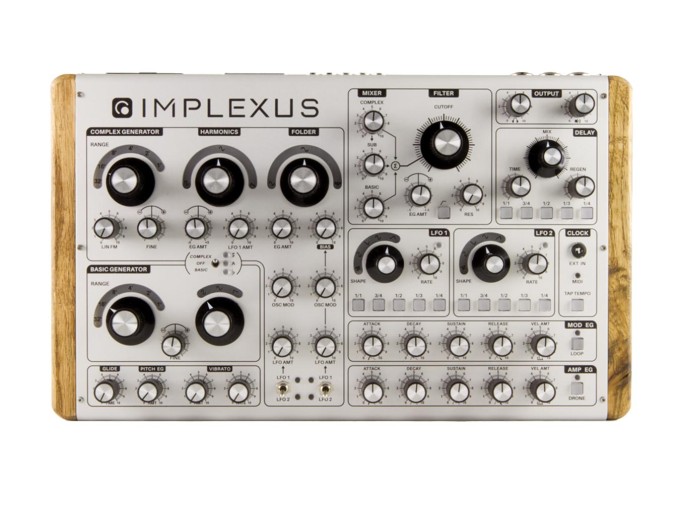 Implexus from Majella is a fantastic combination of east and west coast synthesis in the form of a desktop synthesizer, loaded with both analog and digital goodness. Starting with a west-coast approach, the Implexus features two analog oscillators set up in a traditional complex routing of carrier and modulator—or in this case, complex generator and basic generator, respectively. Both oscillators have coarse octave shifting as well as fine tune controls along with a shared internal oscillator tuner that can be used on either at any time for extra-fine tuning. Though the basic oscillator gives you only three traditional waveshapes to choose from, the complex generator features variable harmonic shaping, wavefolding with biasing, and two additional audio-rate modulation amounts.

Moving on to the analog mixer, Implexus blends both oscillators with a sub-oscillator that follows the complex generator's frequency for a fuller, more rounded sound. Implexus shifts into east-coast synthesis territory by feeding the mixer into the analog 12dB/oct filter, featuring full control over resonance, pre-routed envelope modulation, and even a switch to change between high and low pass. On top of a modulation envelope, Implexus features a distinct amplitude envelope and two LFOs with loads of pre-routed connections all around the front panel controlled by attenuators and attenuverters. Unique envelope features include looping AD on the modulation envelope as well as droning the signal path with no use for the amplitude oscillator. Each LFO includes five selectable waveshapes with rates that range 0.01Hz all the way up to 100Hz for extreme audio-rate modulation, as well as specified clock division to keep everything synced to the master clock.

Finishing out the signal path, Implexus introduces a fantastic stereo digital delay with analog mix control as well as time, feedback, and clock sync controls. Controlling Implexus is simple and quite capable with accessibility over MIDI USB or 5-pin DIN as well as CV gate, pitch, and velocity inputs. Implexus also features loads more CV inputs and outputs for sending and receiving clock, utilizing the two main oscillators elsewhere in a modular system, and even to modulate parameters such as the filter cutoff or the wave-folding amount. Majella's Implexus combines opposing ideologies to create a versatile, unique, and easy to use synthesizer for making solid leads, basses, experimental sounds, or anything you can think of.