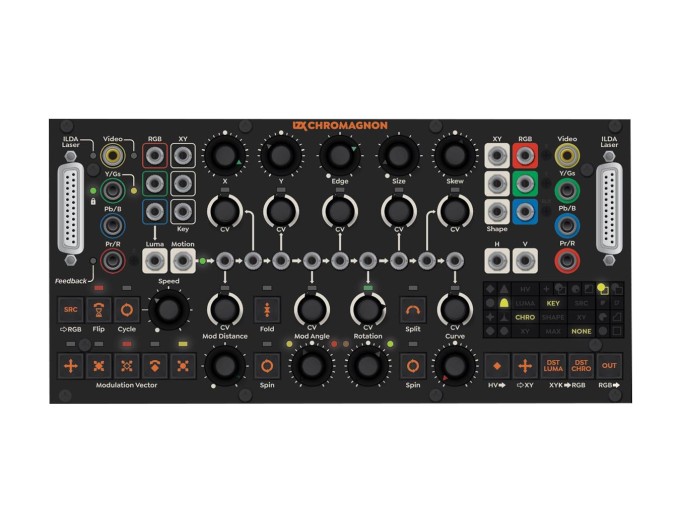 The Chromagnon is the beginning of a new era for LZX Industries: a standalone and Eurorack-compatible video instrument for chroma keying, shape generation, raster manipulation, and more. Following in the footsteps of the remarkably powerful Vidiot, Chromagnon provides an even more complete workflow and can act as the centerpiece of an entire video synthesis-oriented modular system—or it can operate entirely standalone with included enclosure and PSU.

In many ways the successor to LZX's Visual Cortex, Navigator, Shapechanger, and more, the Chromagnon has everything you need to start a Eurorack video system. It provides an input decoder capable of accepting composite, component, S-Video, and ILDA inputs for further processing. Its output encoder supports the same formats. Perhaps best of all, the video interfaces can work with up to 1080i60 resolution—the highest definition of any LZX device to date, allowing you to bring your extant LZX approach into higher resolution than ever before.

The Chromagnon featured an integrated complex cartesian processor and potential for quadrilateral shape generation, with concepts adapted from the previous Navigator and Shapechanger, allowing the creation and animation of shapes within the frame. Depending on the selected workflow, these can even be used as powerful tools for vector rescanning/arbitrary raster manipulation—providing a more direct approach to Rutt-Etra style visuals than possible with any previous LZX device. Use in combination with an XY display, ILDA laser, Vectrex, and more to create unreal ghostly images.

Keying, colorization, raster manipulation, shape generation, and more—Chromagnon is LZX's most complete and most ambitious device to date.