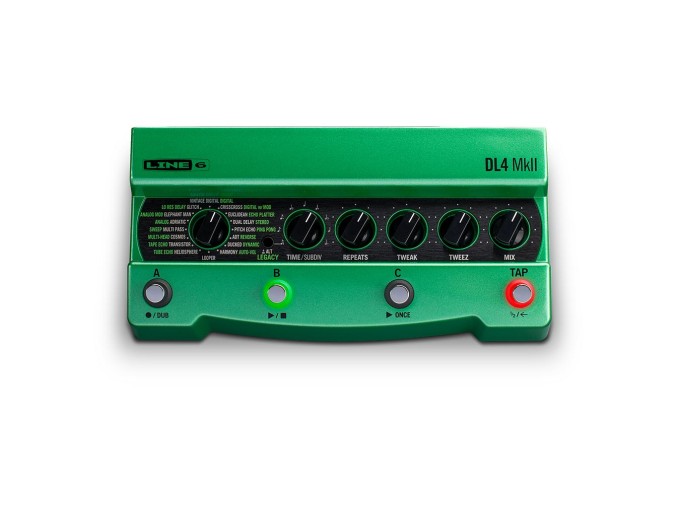 Building on over two decades of guitarists and performers creating brilliant time-bending effects, the DL4 MkII from Line 6 is the successor to the eponymous stereo multi-flavor delay and looper pedal. Sporting its distinct green sheen, the DL4 MkII incorporates all the same functionality and user interfacing of the original with the addition of fifteen new delay modes to choose from, taken from Line 6's current line of Helix and HX-Stomp amp and effects processors, with models like the Pitch Echo, Euclidean Delay, and many more. However, DL4 MkII honors its heritage by retaining the same classic DL4 models emulating the Echoplex, Space Echo, Memory Man, and so many more flavors of delay, all of which utilize the familiar Tweak and Tweez controls for type-specific sound shaping. In addition to the original delay time, repeat, and mix controls, the delay time also features a subdivision alternate control for easy time-synced shifts in delay-lengths.

Now of course, it wouldn't be the DL4 without the fantastic four-switch looping functionality, and DL4 MkII pushes the envelope of record time past the original fourteen seconds to a lengthy four minutes. You can even loop longer stretches of performances with the optional microSD slot, spanning into hours of length for compositional creativity beyond the scope of a traditional looping artist. DL4 MkII provides access to one-shot playback as well as start/stop and overdubbing for complex layering of sound, and onboard performative actions such as halftime and reverse playback can be reincorporated into the overdub for experimental layering of sound.

Stereo processing remains as much of a fantastic tool as it was twenty years ago, but the influence the DL4 had on vocalists or other mic'd sources has not gone unnoticed with the inclusion of a dynamic microphone input. This separate microphone input includes its own gain control and is included in the dual looping configuration of mono/stereo as well as pre/post signal routing. For setting up and recalling up to 128 presets as well as remote control changes, the DL4 MkII features full 5-pin DIN MIDI I/O to connect across other MIDI enabled devices or straight to your computer over USB-C. With the inclusion of expanding your footswitching or controlling parameters via an expression pedal, the DL4 MkII retains the highly-regarded nature of its predecessor while expanding upon and innovating the nature of delays and looping in creative musical contexts.