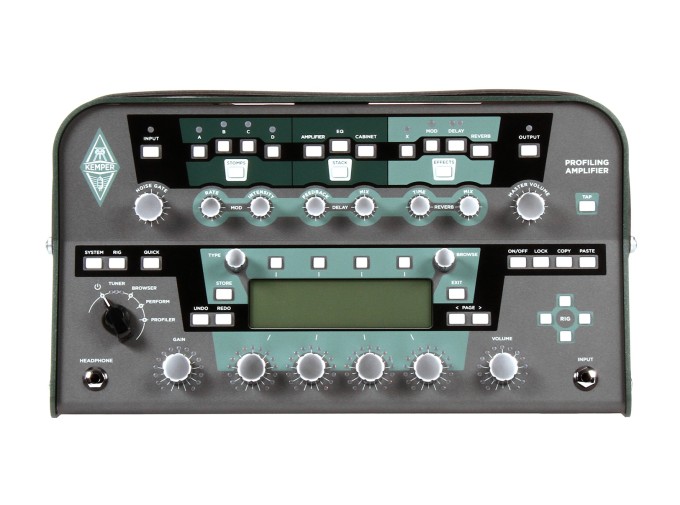 With their Profiling technology, the Kemper Profiler offers unparalleled digital recreation of real guitar amps, capturing not only the tone but also the feel and dynamic response that's critical for many players. Whether you're a gigging guitarist seeking consistency in your live sound, a versatile session musician in need of a wide range of stellar tones, or an avid amp collector looking to bring all their favorite sounds wherever they go, the Profiler is sure to deliver.

Profiles are created using real amplifiers and microphones, with Kemper's unique process proven to capture every detail of the tone and behavior of an amp. Once the Head's direct output is connected to an amp's input and a microphone placed in front of the speaker cabinet is running back into the Profiler's return input, the series of test tones used in the Profiling process will analyze the nonlinear behaviors of real circuits, contributing to the life-like response of playing a Profile. Tube, solid-state, or even other digital amps are fair game for the Profiler, making it a brilliant way to consolidate expansive arrays of gear into one unit. Not equipped with an optimal recording space or existing amp? The Kemper Rig Manager software for Windows and macOS not only keeps your firmware up to date, but also taps into the huge library of Profiles made by users across the world to bring a nearly endless resource of tones into your own setup.

The Profiler Head presents itself in a form factor that should be familiar to most guitarists, resembling an amp head that would feel right at home adorning a guitar cabinet. In fact, you could add your favorite power amp or opt for the Powerhead version of the Profiler, and you can bypass the internal cabinet simulation and drive a real guitar cab. For even more flexibility, Kemper offers the Kabinet, loaded up with Kemper Kone speakers which can emulate the response of the most sought-after and highly regarded cabinets of all time.

A Profile consists of three components, defined in the Stack section as seen at the top of the front panel: Amplifier, EQ, and Cabinet. Once a Profile is loaded up, various amps and cabinets can be swapped around and combined in countless ways, and the EQ allows things to be fine-tuned to your liking. Beyond the core of a Profile, eight effects slots exist, with four each before and after the Stack section. With classic built-in effects like wah, compression, delay, reverb, and more, the Kemper Profiler can cover your entire signal chain with ease, especially when combined with the Kemper Remote foot controller.

Look no further than the Kemper Profiler if you're looking for a way to modernize your guitar amp setup, without cutting corners on your precious tone.

Specs
Product Demo Videos
Kemper Profling Amp demo
Here we are demoing the Kemper Profiling amp showing off some of it's different amp models and effects. We go through some of the clean, overdriven and distorted amp models as well as some of the built-in effects like Compression, Reverb, Stereo Delay, Chorus and Bitcrusher.
Kemper Profiler Head Modeling Preamp Reviews
Register with :